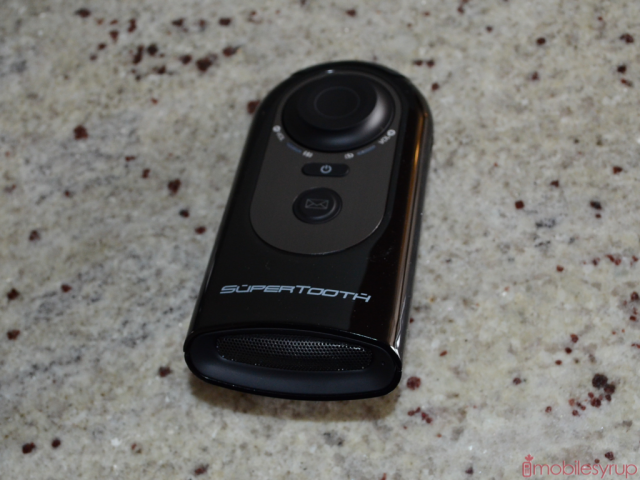 The Bluetooth speaker is relatively enigmatic these days, as the uses are fewer than the all-too-common headpiece from companies such as Plantronics and Jawbone.

SuperTooth, a relative newcomer to the market, released its excellent SuperTooth Buddy speaker last year, which fit comfortably on the visor of a vehicle and allowed users to answer and make phone calls when connected to their Bluetooth-powered phones.

Its follow-up, SuperTooth HD, takes the same idea and hammers it forward into the future with a Siri-like assistant powered by Dial2Go, a louder, clearer twin-speaker setup, and a lot more functionality for your $99.

The SuperTooth HD uses the same magnetized clip as its predecessor but, like most of the components on the device, it is made more robustly. The twin 5 Watt speakers are unbelievably loud — at medium volumes it fills up the entire car with sound — and can be used as a stereo music player when paired with an A2DP-enabled smartphone.

The buttons on the front are fairly self-explanatory: Call/End, Power, and Assistant. The main button is also a scroll wheel to increase and decrease the volume when necessary. When a call comes through, the punchy middle area answers, or when initiating a command, acts as a unified single entry point for all responses. 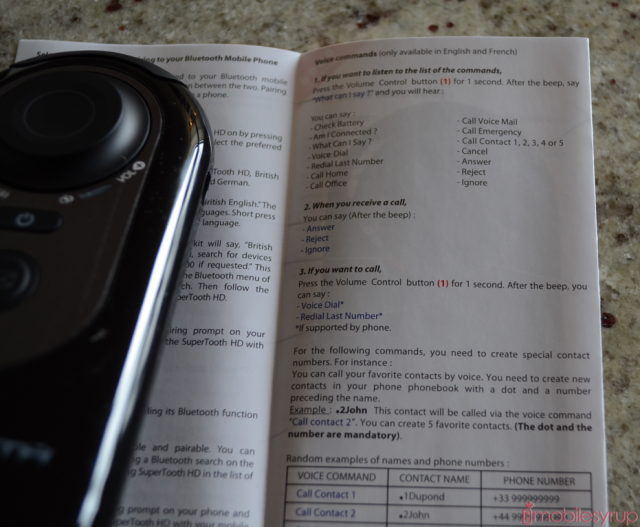 When first turned on the SuperTooth HD walks you through an initializing menu including setting the correct language and transferring existing phone contacts over to the device. Once completed, you don’t have to dial into your phone’s built-in voice command system but can instead say, “Dial John mobile” and it will know who you’re speaking of.

Other commands include “Call Voice mail,” “Redial last number,” and “Check battery,” and the recognition has been perfect each time I’ve used it. If you press “Voice Dial” when connected to an Android or iPhone, it will initiate the phone’s built-in service such as Siri. This allows you to have your cake and eat it too. 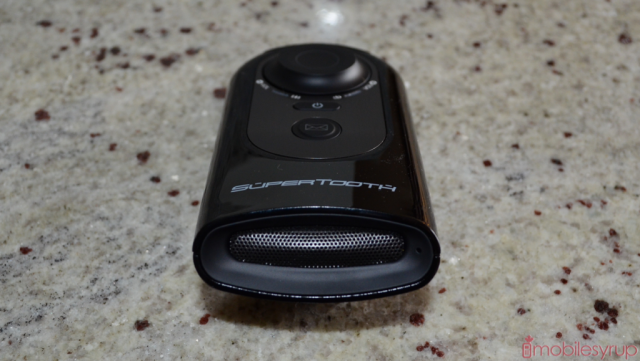 But the SuperTooth HD also comes with a Hands-Free Assistant feature that does much of what Siri claims to do. Initiated by the bottom button (with the mail icon) it automatically dials a local Canadian number that, when connected, asks you what you’d like to do. Because at that point you’ve already signed up for an account and have synced your contacts with the Dial2Go-powered service, you can say things like “Email John Williams, Hey John Good to hear from you, etc.,” and it will transcribe and send it off.

The service can even plug into Twitter, Facebook and Evernote, and when testing I found it to be quite accurate with only a few transcription errors.

With the optional Android or BlackBerry app, SuperTooth monitors incoming emails and texts and reads them out to you as they come in, preventing you from having to fumble for your phone while driving. You can even set it up (on Android) to turn on automatically when Bluetooth is switched on.

After six months the transcription servie is $39.99/year, which seems reasonable if you’re constantly going to use it. 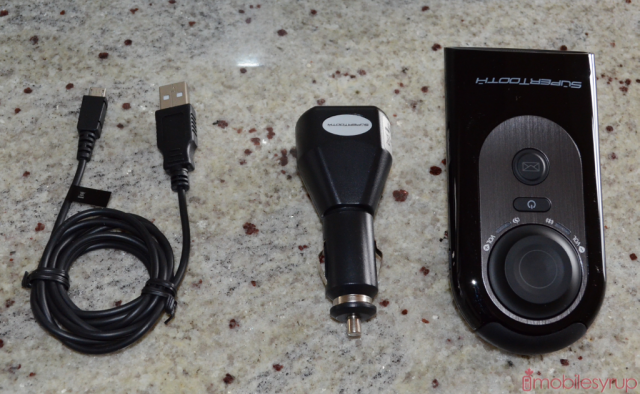 The battery on the SuperTooth HD lasts weeks if not months on a single charge, and can be plugged in using the included microUSB cable when not in use. I found call quality to be some of the crispest I’ve ever heard on a speaker, and there are two microphones, alongside two digital signal processors, to ensure that background noise, either on your end or your caller’s, is a non-issue.

SuperTooth HD is available for  $49.99 from retailers such as Canada Computers, and for $129.00 from larger stores such as Best Buy.