The Galaxy S3, as it’s taken to be called, has popped up on British retailer Carphone Warehouse in a rather nondescript render that could show the first inklings of a design. With the power button the right, and the volume rocker on the left, the phone looks to embody at least a Samsung “essence,” even if it is not the real deal.

Earlier, Chinese forum Mobile01 obtained a few photos of the upcoming Galaxy S3 in its prototype form, showing off the on-screen menu buttons of the phone. Looks like Samsung will be switching things around a bit, with the back button on the right of the home button, and a legacy menu button on the far left when apps need it.

Though the leaks shots are likely not carrying what will be the final “body” of the device, we can safely say now that Samsung is wisely following Google’s guidance and using on-screen menu buttons, which provide far more flexibility depending on device orientation and legacy apps. It’s also likely that the screen, which is expected to be 4.6-inches diagonal, will be wide enough to comfortably support four virtual buttons with room to spare. 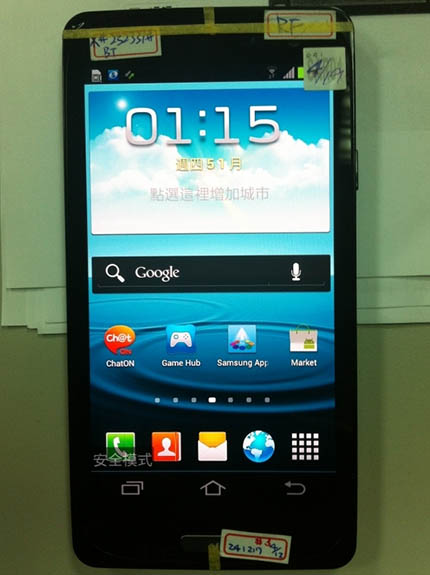 If you look at the screen head-on, it’s clear that despite the narrower aspect ratio compared to the Galaxy S2 (16:9 compared to 5:3) Samsung is still able to fit five buttons along the bottom dock, including the right-side app drawer button.

It looks like TouchWIZ, Samsung’s custom Android skin, has not changed much moving to Android 4.0, but we’re hoping there are more significant changes under the hood.