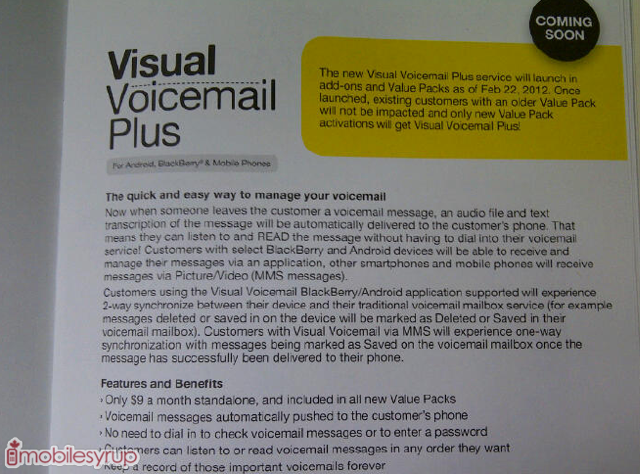 It was known that Rogers was going to roll out an add-on for BlackBerry and Android devices called “Visual Voicemail Plus”. This was expected sometime in February and it looks like the date is confirmed to be the 22nd, well at least for Fido (and most likely Rogers). According to the above internal doc the feature will cost $9/month, but clearly states that “once launched, existing customers with an older Value Pack will not be impacted and only new Value Pack activations will get Visual Voicemail Plus”.

If a voicemail is left on a customers phone, Visual Voicemail Plus basically gives those who have select BlackBerry and Android devices an audio or text file in which they can listen and read the message. The select devices for Rogers is the BlackBerry Bold 9700, Torch 9800, Sony Ericsson X10 and the Samsung Galaxy Q. For Fido, the select devices are the BlackBerry Curve 9360 and Samsung Galaxy Q, then more will be rolled out later.