Toronto woman has affair… blames Rogers for husband finding out 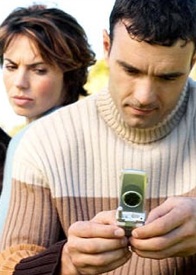 Remember a few months back when a Winnipeg man claimed that the pre-loaded Virgin Mobile text messages ended his relationship? Well I guess it’s Rogers turn as Toronto-resident Gabriella Nagy is claiming that due to Rogers billing procedures her husband found out about her affair… so she’s suing them for a cool $600,000 for alleged invasion of privacy and breach of contract.

According to The Star, Back in 2007 Nagy had a Rogers cellphone account in her maiden name that was sent to her home. Her husband was the account holder for their cable TV and decided to bundle everything together and get a “global” invoice sent to the home – including an itemized cellphone bill. Well, the story goes that the husband got a hold of the bill and started to see hour long conversations to the same number, found out that she was having an affair… eventually deciding to leave the marriage.

Nagy said she was so distraught afterwards that her work performance dropped and lost her job. “I lost everything. I want others to know what a big corporation has done. I trusted Rogers with my personal information. We had a contract – and agreement that put my life right in their hands.”

In court documents Nagy states “The husband used the previously private and confidential information that the defendant unilaterally disclosed to the husband.” In addition, claims that Rogers “unilaterally terminated its cellular contract with the plaintiff that had been in her maiden name and included it in the husband’s account that was under his surname. The plaintiff’s maiden name and the husband’s surname were different. Such unilateral action by the defendant was done without the knowledge, information, belief, acquiescence or approval of the plaintiff.”

Nagy also stated that the affair “was a mistake… But I didn’t deserve to lose my life over it.”

More here at The Star