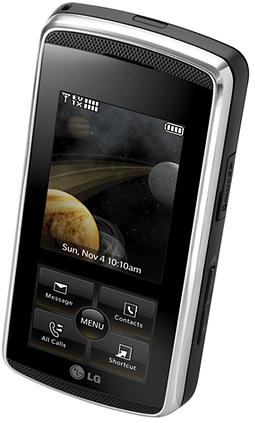 Telus has announced that they are the first to bring the LG Venus touchscreen phone to Canada. The LG Venus will be available mid-April in black with silver trim, with a pink version available later in the spring

The Venus is a unique as it has a touch screen interface, however it is a bit deceiving as it only uses half of the screen. It’s a slider phone you so when you slide the device up it reveals a 12-key pad which is a cool feature. It comes loaded with an average 2-megapixel camera.

The LG Touch series will support a wide range of entertainment services including TELUS mobile music, Mobile Radio, Mobile TV and Navigator. For the Music, the speak is located on the back so you will have to flip it around to hear it.

“Today’s cell phones are incredibly powerful communications and entertainment devices. To better utilize the capabilities of these devices, we believe the touchscreen interface is the future,” said Rizwan Jamal, senior vice-president of TELUS Consumer Solutions. “We are very excited to introduce the LG VENUS, the first of the LG Touch series. The LG VENUS will be followed by additional touchscreen phones later in the year to help keep our customers entertained and connected whenever they want, wherever they are.”

“LG is excited to launch our LG VENUS Touch phone in Canada with TELUS. Canadians looking for style and state-of-the-art technology will love this phone,” said, Andrew Barrett, vice-president of Marketing, LG Electronics Canada. “With the release of the LG VENUS, Canadians will be able to experience touch technology while they listen to their favourite songs and view videos, all packaged in a very attractive two-screen design.”