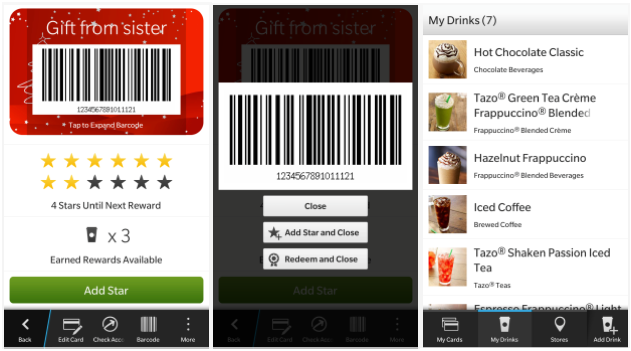 Starbucks ended support for BlackBerry devices back in August of 2012, stating “We’re currently evaluating support for the BlackBerry platform and will no longer be offering our current application to new users.” The massive coffee chain has over 1,200 locations in Canada and they have yet to launch a BlackBerry 10 app.

A new app called MAKE was designed by 3rd party developer qbotron and has answered the call to those addicted. MAKE brings part of the Starbucks app that iPhone and Android users are currently experiencing to BlackBerry 10 users (Z10, Z30, Q5, Q10) and allows you to input all your Starbucks cards on your BB10 device and generate barcodes to pay for your beverages/food/chotchkies. MAKE also gives you the option to keep track of your stars and reward counts, but isn’t currently synced up with your official Starbucks account. In addition, the app shows a partial list of the Starbucks drink menu, plus a 3D map of all the locations, but one limitation is that the app cannot retrieve account balance.

The developer notes that the MAKE app “was created to encourage Starbucks to bring a native app to the BlackBerry 10 platform. With enough positive response for MAKE, I hope Starbucks will see a feasible demand from BlackBerry 10 users.”