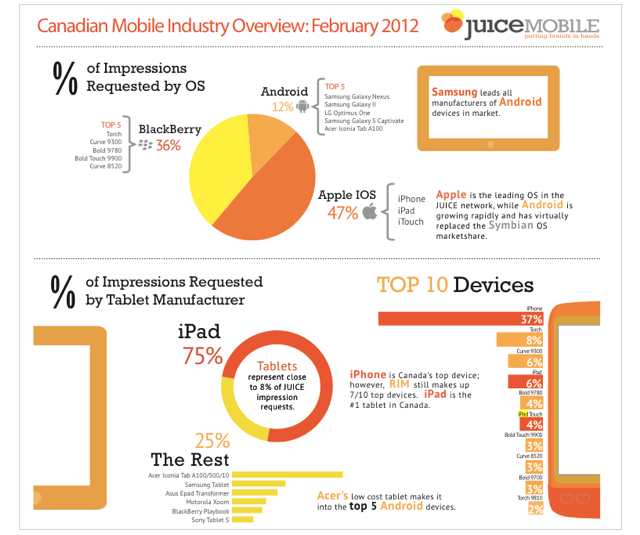 Toronto-based Mobile ad network and app developer Juice Mobile has compiled some stats based and put it into a pretty infographic. Neil Sweeney, Juice Mobile CEO, stated in an email to us that the “Canadian Mobile Industry Overview” report is based on information gathered from 1,500 different publications/apps, 1 billion mobile ads served, and is specifically for the month of February 2012.

Some interesting takeaways, but nothing real surprising. Apple’s iOS has the most requested ad impressions with 47%, followed by RIM with 36% and Android with only 12%. Juice notes that “iPhone is Canada’s top device; however, RIM still makes up 7/10 top devices. iPad is the #1 tablet in Canada”. The iPhone represents 37%, followed by a BlackBerry Torch with 8% (unfortunately it’s not known is what model of Torch), then the Curve 9300 at 6%.

Tablets represent 8% of the Juice Mobile impression requests, so around 80,000,000 February ad impressions. The iPad dominates with 75% of requested impressions, followed by the Acer Iconia Tab A100/500/10 models, then an unknown size of the Samsung Galaxy Tab.