Twitter for iOS and Android updated with new designs, features 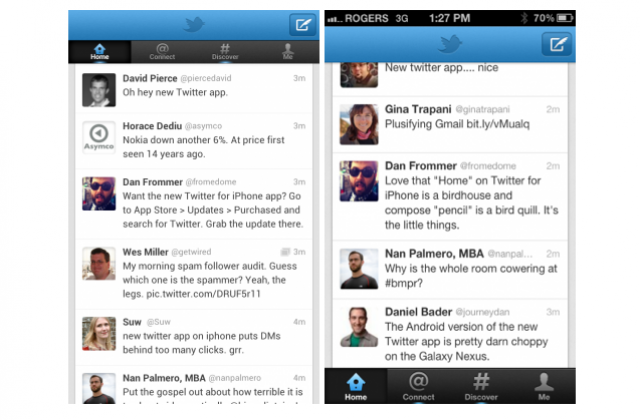 Lots of new apps this week! Today Twitter for iOS and Android have both seen significant design and feature updates.

Along with a fresh overhaul of its website, the mobile versions have been improved with simplified, minimalistic and homogenous looks to them.

There are two major feature additions, as well: a dedicated “Discover” section for trending topics, but now there are photos and links to each. It is simple and beautiful and makes Twitter more of a news destination than ever before.

You can now also see who has retweeted and replied to any tweet in the simplified and reduced Tweet screen.

The iPhone version looks and performs great, but we’ve had serious slowdown with the Android version on the Galaxy Nexus.

Check out the new app in the iOS App Store and the Android Marketplace, respectively.