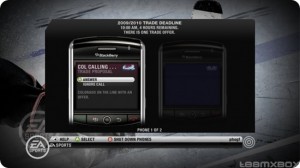 British Columbia-based EA Sports will be releasing the anticipated NHL 10 in September on both Xbox and PS3. Previous versions of this game have won many awards and they have certainly cashed in from various forms of advertising with in-game advertising.

RIM has been going heavy on the social media scene lately and it seems that RIM wants a piece of this in-game advertising action and have placed the beloved BlackBerry device in trade deadline area. From the looks of it you’ll have the option to answer, make or ignore a call.