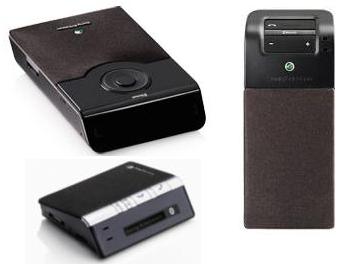 Nova Scotia and Quebec have recently been subject to a new law that bans the physical use of cell phone while driving. Sony Ericsson has released a new Bluetooth car speakerphone called the HCB-150.

This size is only 5.1 x 3.1 x 1.0 inches and weights 180.0 grams… so there will be no excuses that this cannot fit anywhere inside your vehicle. The OLED screen displays the caller’s name, while a voice announces it verbally. In addition, the HCB-150 displays who’s calling on its screen has “Tilt sensors” to keep the screen positioned properly and allows drive safe while you talk. The HCB-150 is compatible with the K550i and K850i and and non-Sony Ericsson mobile phones.

All these have a range of up to 10 meters and will be available in Canada late Summer 2008.