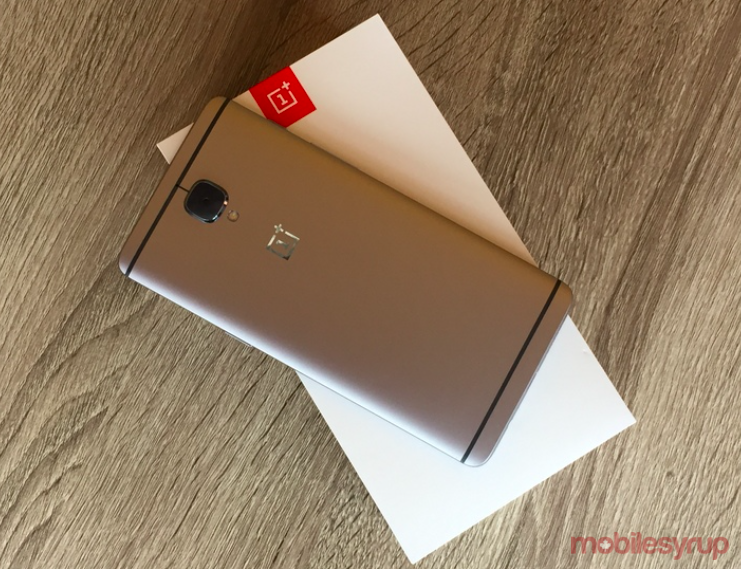 After numerous leaks, some seemingly propagated by the company itself, the OnePlus 3 is official. Announced today at a special virtual reality event, Canadians can buy the smartphone right now through the OnePlus Loop app for $519 CAD, and later today via the company’s website. There’s no need to wait to get an invite this year, though it’s not clear how much stock OnePlus has ready at launch.

Featuring an anodized aluminium unibody design, and available in two different colours at launch, graphite and soft gold, the OnePlus 3 measures in at just 7.35mm thick and weighs 158 grams.

Inside the smartphone is Qualcomm’s latest Snapdragon 820 processor, a whopping 6GB of RAM and 64GB of internal storage. The OnePlus 3’s 5.5 inch full HD AMOLED display features a 401 pixel per inch pixel density. Also included is a front-facing finger print scanner and dual SIM slot, though there’s no slot for a MicroSD card.

The smartphone’s 3,000 mAh battery includes the company’s new Dash Charge technology. According to OnePlus, its own fast charge tech is faster, safer and cooler than competing solutions. With Dash Charge, the company says the OnePlus 3 is able to charge its battery to approximately 60 percent in 30 minutes.

On the connectivity front, the OnePlus 3 supports Cat. 6 LTE, Wi-Fi ac and Bluetooth 4.2. The phone supports all major Canadian carriers, on both 3G and LTE, unlocked and out of the box.

A number of accessories are available at launch, including rear snap-on cases, full fledged cases, a screen protector and a variety of charging cables.

Expect to see a review of the OnePlus 3 on MobileSyrup soon.