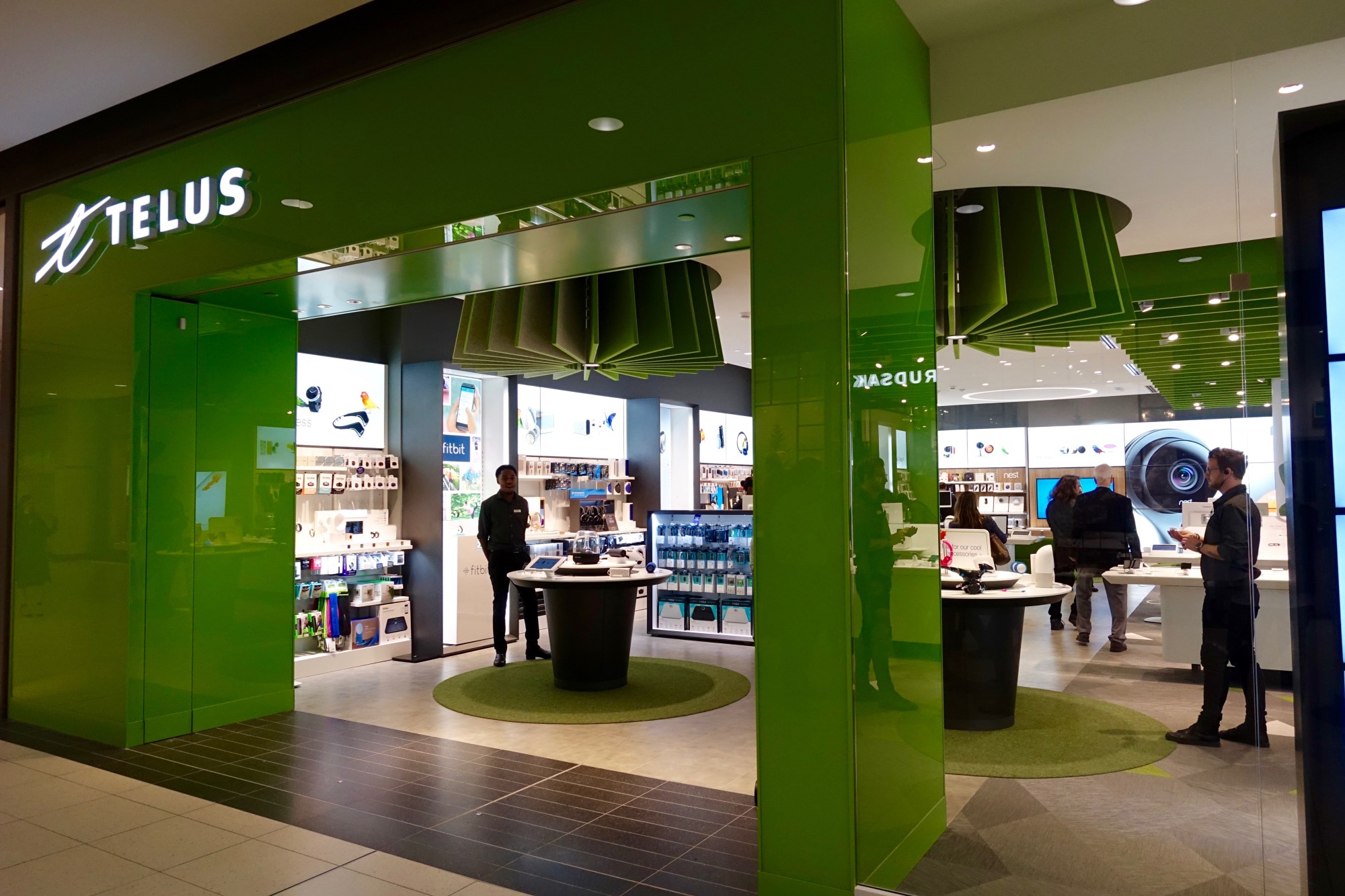 The Telus Tower in Toronto is an imposing, stark structure, a beautiful slab of metal and glass looming over the deep downtown core. On the ground floor, a Jugo Juice serves fresh sugar-in-plastic to thirsty passersby, some Telus employees, many tourists.

Most days, the mood is quietly frenetic, as suits and flip flops alike pass through the hallway towards one of the three elevator terminals. The company owns most of the building’s 25 floors, navigating operations for most of its Ontario and Eastern Canada outfits.

On the fifth floor, across which I would ordinarily not be allowed to freely roam, is a staff cafeteria. The day I arrive to interview newly-minted VP of marketing for wireless and wireline, Brent Johnston, the company is hosting a lunchtime farmers’ market for its employees.

The trope that Telus cares about its customers has long distinguished the Vancouver-based telco from Rogers and Bell, its main competitors in the space. Whereas they can fall back on their media properties, and have used them to great effect, Telus opts for the simpler route: ensuring that once service is sold, customers are treated as well as possible.

That customer-first focus is represented in its new Expect More campaign, which to Johnston is all about acknowledging the industry’s lingering faults and working towards improving the elements within Telus’s control.

“Phone exclusives and other product-based advantages are time-based at best. They’re not sustainable,” says Johnston. He acknowledges that the industry has three “well-invested competitors” in Telus, Bell and Rogers, careful not to tread too hard on their toes. “These days, the differences are not massive between devices,” he continues, “but when you go for an execution-based customer experience, it’s hard for the competitors to catch up.”

Johnston says the company has accomplished this in a number of ways, including the addition of dedicated learning centres in each of its corporate stores, and at many of its dealers, where customers can sit down with a Telus employee to figure out the nuances of a new smartphone, tablet or, more recently, wearable.

He also touts Telus’s transparency throughout the transition to two-year contracts prior to the adoption of the Wireless Code of Conduct. “We were 95 percent compliant to the Code before the announcement,” noting that many of the CRTC’s eventual codifications were modelled on existing Telus policies (a claim Bell and Rogers would probably reject).

According to the CCTS, an arms-length non profit that compiles annual reports on consumer telecom issues, Telus garners on average the fewest complaints of all the major Canadian telcos. In the organization’s 2014-2015 Mid-Year Report, Telus had one-eighth as many complaints as Bell, and one-fifth as many as Rogers.

Throughout my conversation with Johnston, as employees enter and leave the cafeteria, it occurs to me that the company’s presence in Toronto, significant as it is, is removed from its cultural heart back in Vancouver. Earlier this year, Toronto-based CEO Joe Natale, a long-time colleague of then-executive chairman and current CEO Darren Entwistle, stepped down because he couldn’t relocate his family to Vancouver before the end of the decade. 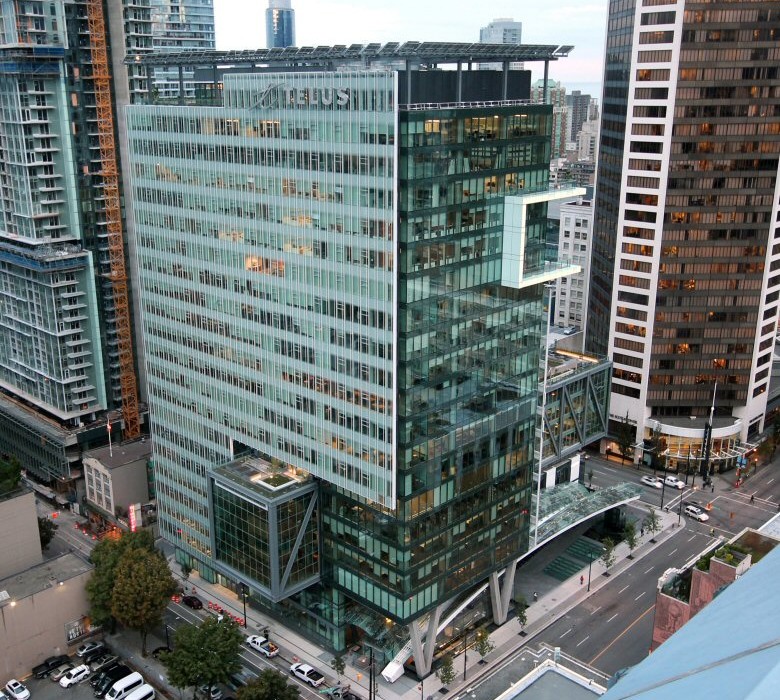 Telus’s new Vancouver headquarters is a paean to green business. Located in the boutique heart of the city’s downtown core, the Garden Centre boasts an 80 percent reduction in power over the average office tower, and features a rainwater recapture system that irrigates the many green spaces throughout the building. The $750 million project is one of the numerous altruistic endeavours in which the company involves itself each year, a movement that chief corporate office and executive vice president of Telus Health, Josh Blair, says is part of the company’s core culture.

“Employees, retirees and board members have donated a total of $400 million and six million hours of time” towards what he says are acts of social responsibility and volunteering.

But what is missing from the adverts of slow-motion monkeys and adorable pandas, or the press releases about Telus employees giving back to their community, is the clear financial benefit to Telus as a public company.

“A public, shareholder-beholden company should be accountable to both shareholders and stakeholders,” continues Blair. Telus’s share price has steadily risen over the past six years after hitting a low of $14.72 in mid-2009, a time where investors were not confident in the company’s decision to partner with Bell on what would become a nationwide HSPA+ and, later, LTE network.

It’s clear now the company made the right bet on technology, but according to telecom analyst Mark Goldberg, the investment-heavy, customer-focused approach the company is known for today took a long time to emerge. “Turning around a culture inside a company the size of Telus is like turning a huge ship around as opposed to a little speedboat.”

Telus’s lineage dates back to the early 20th century, but its most recent incarnation was a product of several provincial and municipal telecommunications companies, including Edmonton Telephones Corporation, Alberta Government Telephones Commission and BC Telecom.

Since Telus’s acquisition of Clearnet in 2000, its carefully-manicured marketing has been noted by experts for its effectiveness, and though it has moved agencies for both the core Telus brand and its Koodo subsidiary, the cute animals will continue to live alongside its Expect More campaign for the foreseeable future.

Johnston admits that the core product experience is remarkably similar between the big three Canadian carriers. “Most carriers are pretty good,” he says, “at connecting your smartphone to the internet, to enable all those amazing experiences we expect.” To him, Telus excels at that critical level, expanding its LTE to support 95 percent of the Canadian population based on its recent quarterly earnings. And without stakes in broadcasting, sports teams or massive licensing deals, Telus has been forced to find its own way.

“We equate value as an end to end experience,” says Johnston. “When you have people willing to switch carriers for a $50 discount on a handset, then we’re doing something wrong.” For Telus, customer retention — that all-important quarterly churn stat, which has stayed under one percent for nine quarters — is its defining metric.

According to Marc Jamieson, Telus’s director of marketing, merchandising and retail design, the company has really pulled ahead with its retail experience. Modelled after Apple’s recognizable minimalism, Telus has overhauled most of its 220 corporate stores and many of its dealer stores across the country in the hopes people will walk in, play with the products, all of which are fully functional, and leave with with one in their pocket.

But when Telus began simplifying its product lineup in 2013, cutting back on the number of devices it sold, its merchandisers faced a looming problem: empty space. The company already sold a bevy of accessories like cases and chargers, but success with early Fitbit models led to a dramatic rethinking of its retail experience. 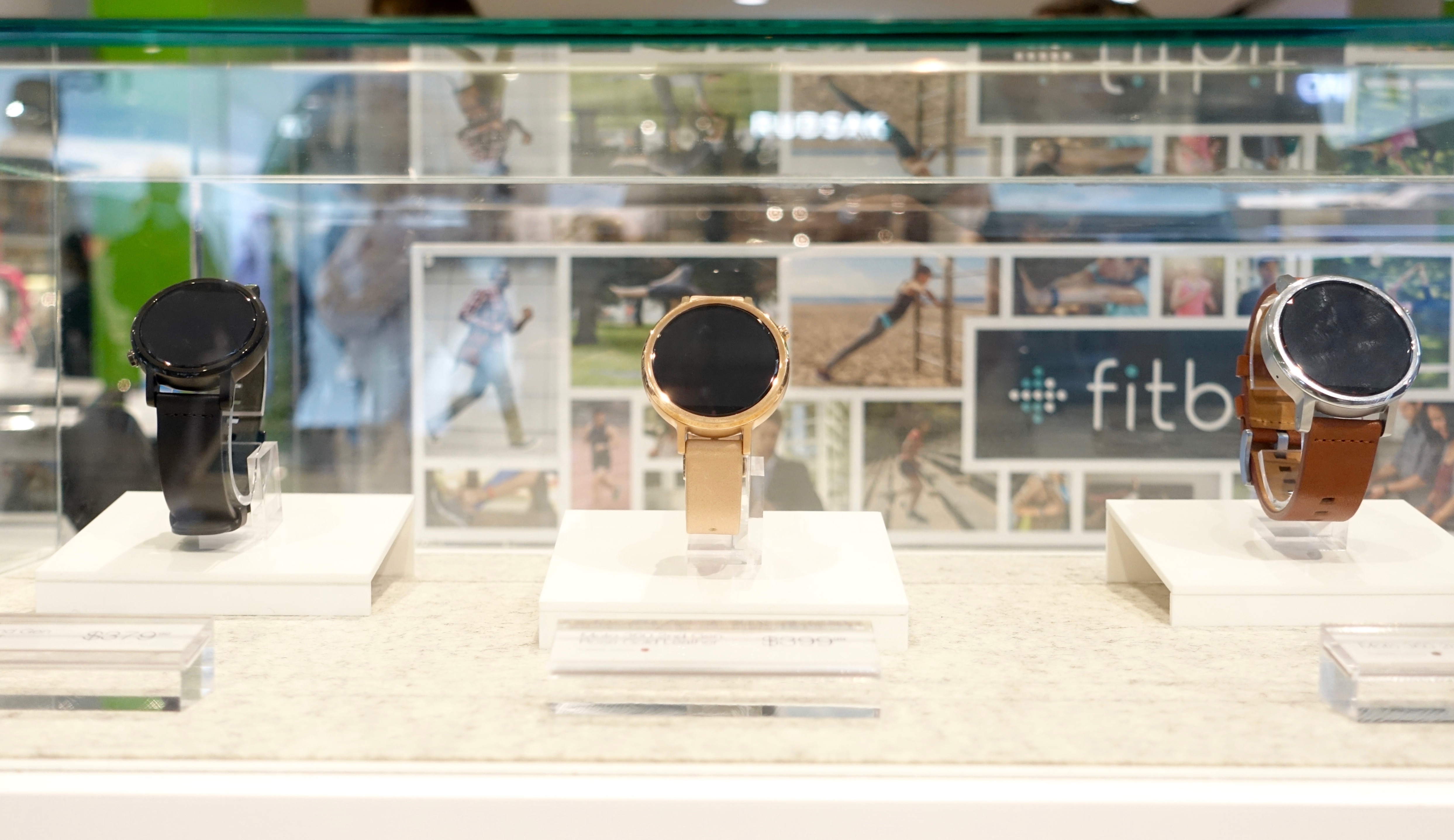 Two new stores, now open at Toronto’s Eaton Centre and Edmonton’s Southgate Centre, encapsulate that shift. “We’ve really turned the store on its head by committing about 70 percent of the store footprint to accessories and about 30 percent to our traditional business,” Jamieson tells me during a media tour of the Toronto store in early November. Resembling a traditional retailer like Best Buy more than any existing Telus store, one is just as likely to see a banner for an upcoming toy or wearable as a new iPhone or Galaxy. “What we see at the entrance are key brands that we are partnering with, and we are certainly becoming more of a traditional retailer by highlighting product in the window.”

These new experience stores, as Jamieson calls them, contain double the staff as a typical carrier enclave, all of whom are familiar with the products and brands, from Mophie to Fitbit to Nest. A considerable amount of wall space is given to specialized phone cases, all of which fetch much healthier margins than a typical smartphone sale. And higher margins are welcome at a time where Telus, along with its competitors, is spending more on customer retention by raising handset subsidies. Telus noted in its most recent earnings report that it “may continue to experience a negative impact on our wireless segment financial results as we expect retention volume and, therefore, related handset subsidy costs to increase for the remainder of the current year and through 2016.” 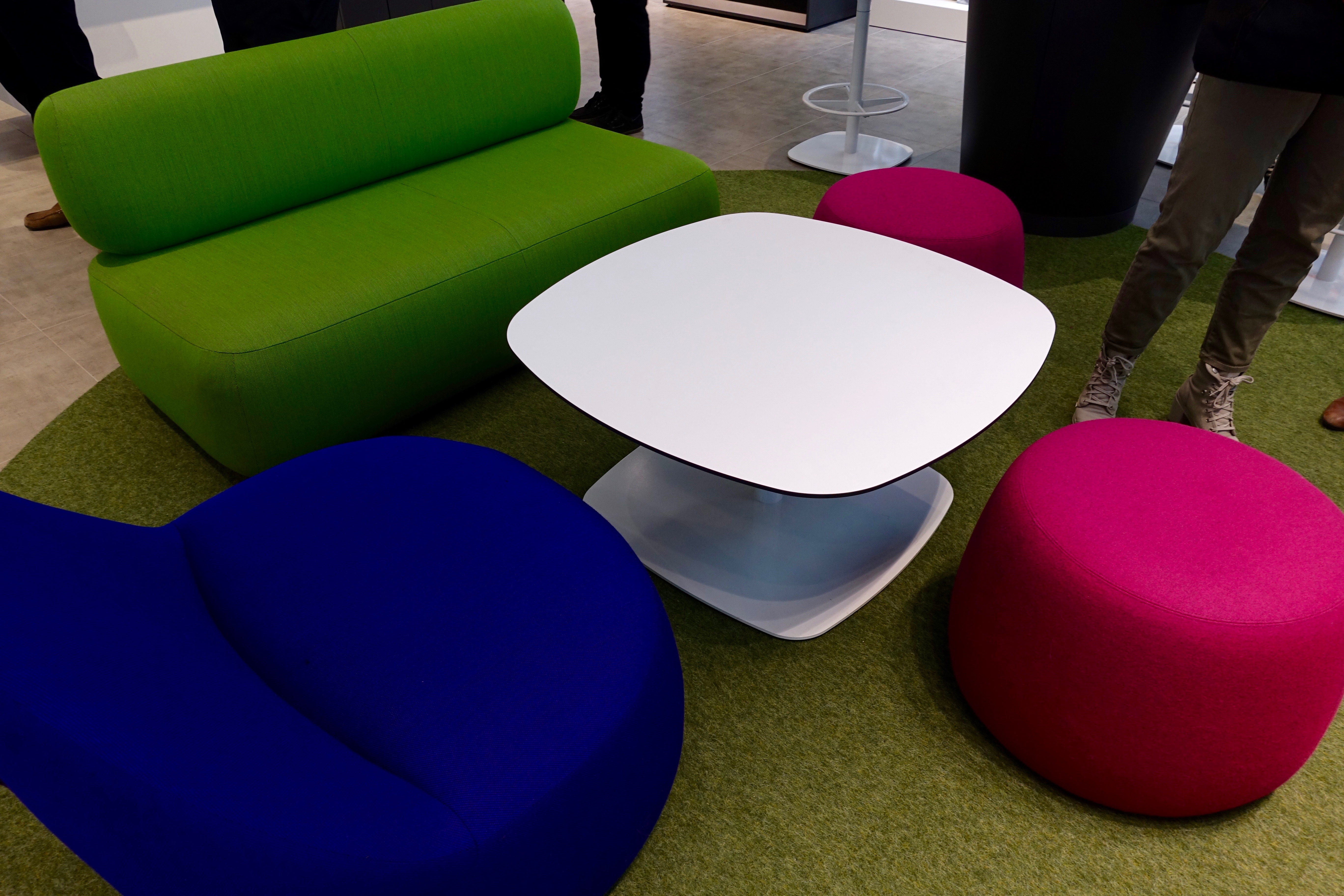 Jamieson notes that while some of Telus’s other stores will see retrofits to include a greater emphasis on smart home accessories and smartphone-enhancing products, the two newly-launched stores in Toronto and Edmonton are the result of a company willing to experiment within a typically-conservative retail culture.

“Not only did we change the design, but we also changed the service model in the store. We don’t have the typical cash desks; instead we have ‘experience tables’ on the side where customers can experience and engage with each other.”

It’s easy to dismiss these changes as ephemeral and insubstantial; does it really matter to customers that they’ll no longer be paying at a terminal? But Johnston insists the numbers speak for themselves, and despite slower growth in previous quarters, the company is forcing its rivals to take heed. “We don’t worry about pricing,” he says, “because we’re an experience company. Only when you don’t perceive meaningful value does it come back to price.”

Many Canadians, however, see things differently. They may have boosted Telus to record user revenue and subscriber numbers, but price is still a considerable factor in the purchase of a smartphone or service plan. Telus generally charges more than other carriers for subsidized handsets, and is often the instigator of industry-wide plan hikes. And while the company claims to have done away with activation fees, heavily advertising it as a differentiator, it still charges customer-hostile fees for in-store SIM swaps or device setup without contract renewals.

“It only takes one misstep to break that trust,” concludes Johnston, leading me to the elevator. He’s one of a number of Telus employees I’ve met that truly believes his company is a role model for corporate governance and responsibility in Canada.

Back on the ground floor, people are still lining up for Jugo Juice. I veer right, towards Starbucks, for my third of the day.