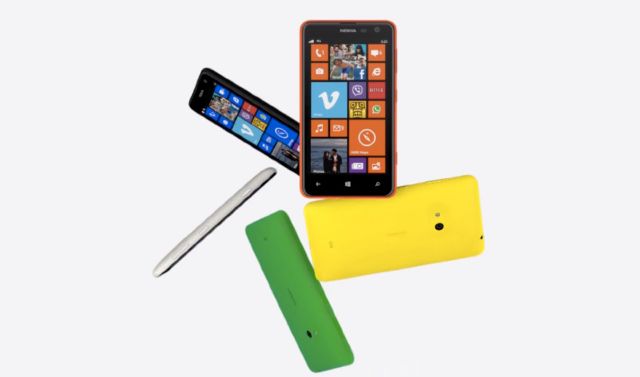 Today, Nokia has announced yet another low-cost Windows Phone 8 device, the Lumia 625. The 4.7-inch LTE-capable device comes in a range of colours that can be customized with removable backplates, and runs Windows Phone 8 GDR2.

The screen resolution is a poor 800×480, making for a disappointing 201ppi pixel density. With a 1.4Ghz Qualcomm Snapdragon S4 processor, 512MB of RAM, 8GB internal storage with microSD expandability, a 5MP rear camera, VGA front camera, and a 2000mAh battery, the Lumia 625 will likely feel fast enough, but lacks the extra headroom of its more expensive counterparts for games.


At first glimpse, there is nothing really special about the Lumia 625 when compared to its earlier Lumia 620 counterpart, but this new device boasts two significant upgrades: a larger screen, and LTE support. The former may not appease pixel density enthusiasts, but this is Nokia’s largest-screened device ever, and should be attractive to those looking for something to compare to their Android friends. LTE support is a big one, too, since an increasing number of countries are starting to offer LTE capabilities at discounted prices.

The Lumia 625 will be available for €220 ($300 CDN) in black, white, orange, yellow or green. No word on if or when it is coming to Canada, but you can be sure the carriers will think about it.