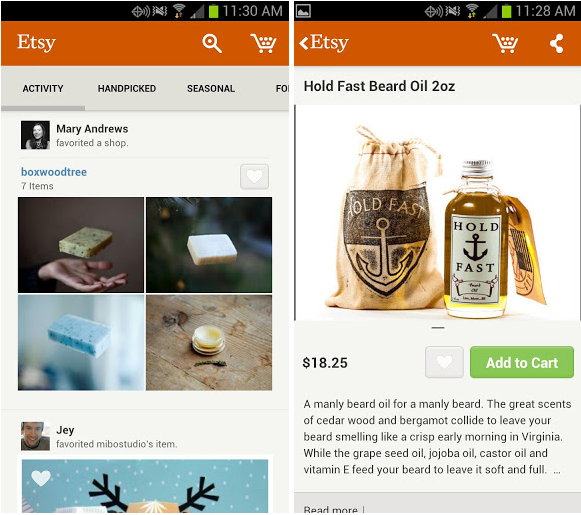 Etsy is one of those websites you either don’t know, or tend to obsess over. Billing itself as “the world’s handmade marketplace, [their] mission is to empower people to change the way the global economy works.”

The company boasts 800,000 sellers hawking products from custom-made scarves to, as seen above, “Hold Fast” beard oil, and everything in between. It attempts to bring buyers and sellers together without being forced to go through traditional retail methods.

They launched an iPad app last week after existing exclusively on iPhone for a long time. The Android app doesn’t share the same feature set as its iOS counterparts — their is no seller management tools just yet — but those are coming soon. The app has a spartan design that suits newer Android apps, with a virtual menu button on devices that support it and horizontal swipe navigation for easily changing categories.

While we’d like to see the app a bit more full-featured, Etsy for Android is a great start. Photos look amazing on high-definition displays, and it’s really just a fun app to browse through, even if you’re not buying anything. People are very creative, and Etsy is a perfect place to show off that imagination. The company claims that a quarter of its mobile traffic comes from Android devices, and around one in four visitors to the site come from a mobile device. This increased to one in three on Black Friday, so the trend is clearly towards mobile apps in the company’s future.