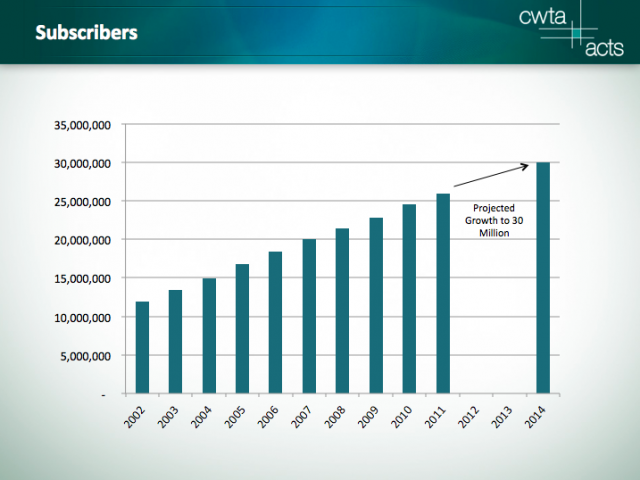 During his keynote address at the Canadian Telecom Summit, Bernard Lord, President & CEO, of the CWTA (Canadian Wireless Telecommunications Association) presented the state of wireless in Canada. Lord communicated that “Wireless today is definitely not your father’s wireless,” echoing what Rob Bruce, Rogers President, said earlier today. Wireless has advanced so much, so quickly and has become engrained into our daily lives.

Specifically breaking down Canadian numbers, Lord said “I don’t think anyone could have predicted the extent to which wireless would become a key driver of Canada’s economy,” generating $43 billion for the Canadian economy in 2010. In addition, in 2010 the Canadian wireless sector employs over 260,000 jobs, with an average salary of more than $64,000 (average Canadian salary is $44,000).

As for wireless subscribers, it was known from the Q4 2011 carrier results that the combined subscriber numbers surpassed 26 million. Today, Lord reaffirmed number and also declared that “wireless penetration in Canada is set to exceed 100 per cent in just the next few years.” Although the Canadian population, according to 2010 numbers, shows the population is at 34 million, the CWTA is predicting that 30 million Canadians will have a wireless device by 2014.