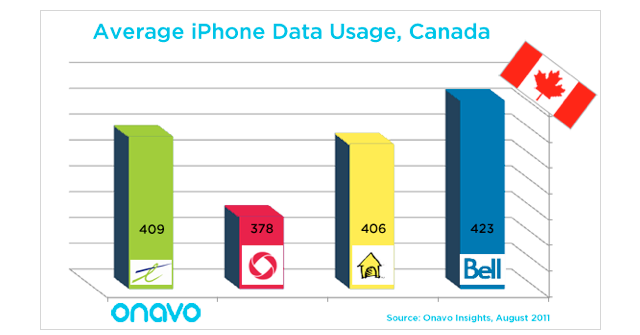 The “Onavo” app is currently available on Android and the iPhone/iPad. The app runs in the background and the company claims it “quietly saves you data (and money)” by compressing the data that’s sent to your device, via their secure cloud based service. I personally haven’t used it, but have since downloaded the app and will report back on the amount saved/not saved.

Canadian carriers have launched all sorts of data plans that range from 100MB, 6GB to Unlimited. Onavo polled Canadians who downloaded their iPhone app and found the average data usage is 404MB per month. The poll was conducted in August of less than 5,000 users. The above graph was sent into us, showing that the Bell iPhone usage is the highest at 423MB, while Rogers is the lowest at 378/month. Missing from the graph are other carriers such as Koodo, SaskTel and MTS.

Mobile data is on the rise in Canada, it’s estimated by 2014 there will be 14.8 million smartphone subscribers in Canada, up from 8.8 million this year. Recently Cisco released the Visual Networking Index and reported that Canadian mobile web usage will hit 18.4 Petabytes in 2012, and is estimated to reach 71.5 Petabytes by 2015.