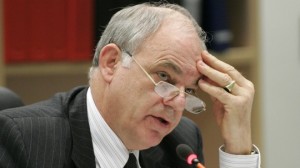 At the 2009 Canadian Telecom Summit, CRTC Chair Konrad von Finckenstein spoke about the National DNCL (Do not Call List) and its so-called misuse. He stated:

“I would like to take this opportunity to deal with an urban myth that we’ve all heard. Somebody has put out the notion that telemarketers, especially foreign ones, came and bought the list of people who do not want to be called and are now calling them. First of all I cannot understand why anyone would want to do it, these are people who have registered and don’t want to be called… Secondly, there is absolutely no evidence that this has ever taken place. We vigorously check who buys those lists and that they are legitimate telemarketers. So let me say once and for all that’s an urban myth, it does not exists. That being said the legislation is not perfect.”

Here is a video of it, but we were way at the back and the audio is muffled. Just good to hear it from him, rather than re-written words: