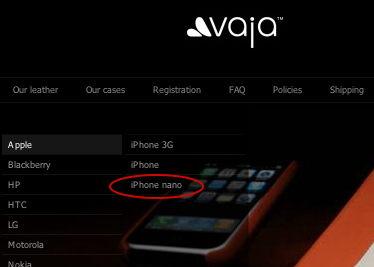 Now that us Canadians are familiar with the Apple iPhone 3G, imagine a world where it is half the size… perhaps something like the Nano size.

There’s been rumours flying around for the past week about the possibility of a iPhone Nano coming out soon, maybe even an official announcement at MacWorld January 5th -9th.  According to iPhoneAlly “We just received word from a reliable source within Apple that they are in fact working on an iPhone Nano and that it will be announced at MacWorld. The source says that the iPhone Nano will most likely be similar in form-factor to the iPod touch, and will probably not include 3G.”.

We’ll have to wait and see what will happen, but more rumours are circulating today as Vaja Cases posted a link on their site promoting the iPhone nano… this has since been taken down.