I’m new to Splatoon, but I’ve already fallen in love with Splatoon 3

Never played the ink-themed third-person shooter series? The threequel is a great place to jump in 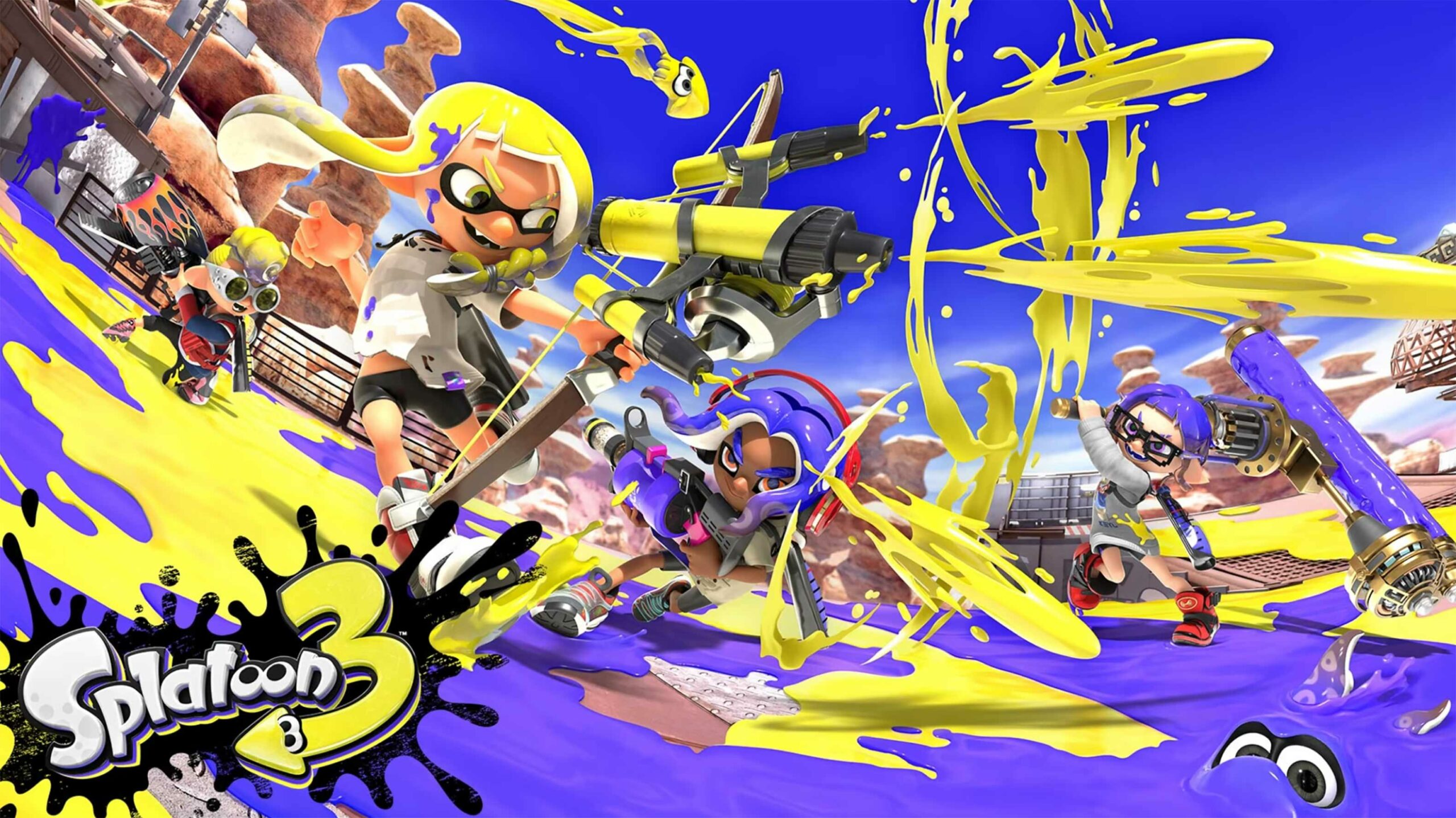 Often, it can feel daunting to jump into a series that’s been around for years, especially a few entries in.

That was initially how I felt going into Splatoon 3. The first game came out on Wii U, a system I barely touched, while the sequel dropped on the Switch in its first few months, when I didn’t yet own one, and I just never got around to it later on outside of a brief demo. Therefore, Splatoon has been something of a blind spot for me when it comes to Nintendo franchises.

I say all of that because after playing a little over an hour of Splatoon 3 at a New York City preview event, I’ve come away in love with the experience. Whether you’re someone who’s been with the series from the start (like MobileSyrup‘s Patrick O’Rourke) or a newcomer such as me, there’s so much to dig about the Splatoon threequel.

Nintendo has a history of taking long-running genres and making smart twists that open them up to wider audiences, like Super Smash Bros. for fighters and Mario Kart for racers. With Splatoon, the Japanese gaming giant has given similar treatment to third-person shooters. Essentially, Splatoon is all about ink-themed variations on traditional types of guns, like assault rifles, shotguns and sniper rifles. This streamlines the moment-to-moment gameplay, as you don’t have to worry about different ammo types; simply dive into the pools of ink that you’ve sprayed to refill your tank. You can also aim with your Joy-Con/Pro Controller’s analog sticks or with motion controls, but I found the latter extremely intuitive, especially when used in tandem with the sticks. Sure, I’ve heard much of this for years from fans of the ink-themed series, but it’s nonetheless something you don’t fully appreciate until you actually dive in yourself.

To start my demo, I played Splatoon 3‘s first three tutorial levels, but I was wary at first. Often, tutorials can feel tedious as they ever-so-slowly walk you through how to perform every single action. But Splatoon 3‘s tutorial didn’t do that; it gave me non-intrusive on-screen messages on how to do everything from coating the floor in ink and then swimming in it to throwing the Splat Bomb secondary weapon to hit ranged targets. Mercifully, there was hand-holding to be found.

In fact, I was even pleased to discover a little bit of room for experimentation. In one area, I chose to ignore the ascending walkway and coat one small wall in paint, which actually gave me a shortcut to the end of the stage. And for context, I ended up passing one of the other media who skipped the tutorial and had some prior Splatoon experience. I say that not to shame him, though, but rather to illustrate just how little of a learning curve there is. 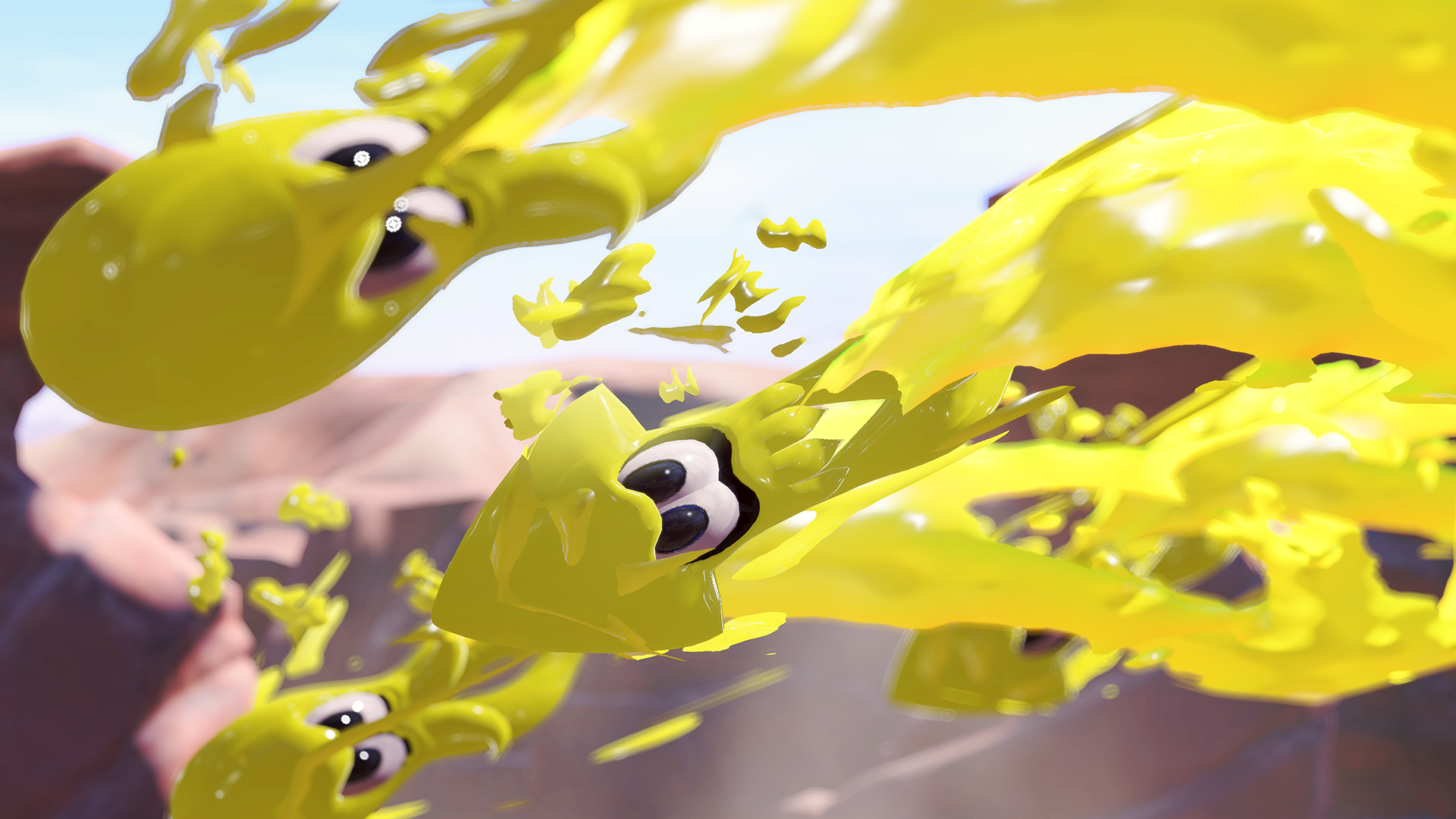 Going into squid form for added mobility is such a neat and unique element of Splatoon.

The later three single-player levels I played through, meanwhile, were slightly more complex. Here, there were light puzzle elements, like using grind rails (“Ride rails”) and Splat Bombs to visit adjacent platforms to unlock keys to clear a path forward. These were by no means headscratchers, but they change up the pace just enough and come in pleasing, bite-sized packages. It’s easy to imagine picking up and clearing a stage or two in between short periods of downtime.

But the absolute best part of the single-player portion, which is new to the Splatoon series, was the Tri-Stringer. It’s a bow-and-arrow that can fire three shots at once — vertically when standing and horizontally when jumping. That in itself is cool, but it’s even more versatile with its charged shots, which freeze briefly before exploding. In the weapon’s introductory stage, there are several enemy configurations that put all of this to the test, such as turrets with shields that require you to time a charged shot to the moving platforms behind them to work around their defenses. All told, the Tri-Stringer was an absolute joy to use as I alternated between its different firing types. 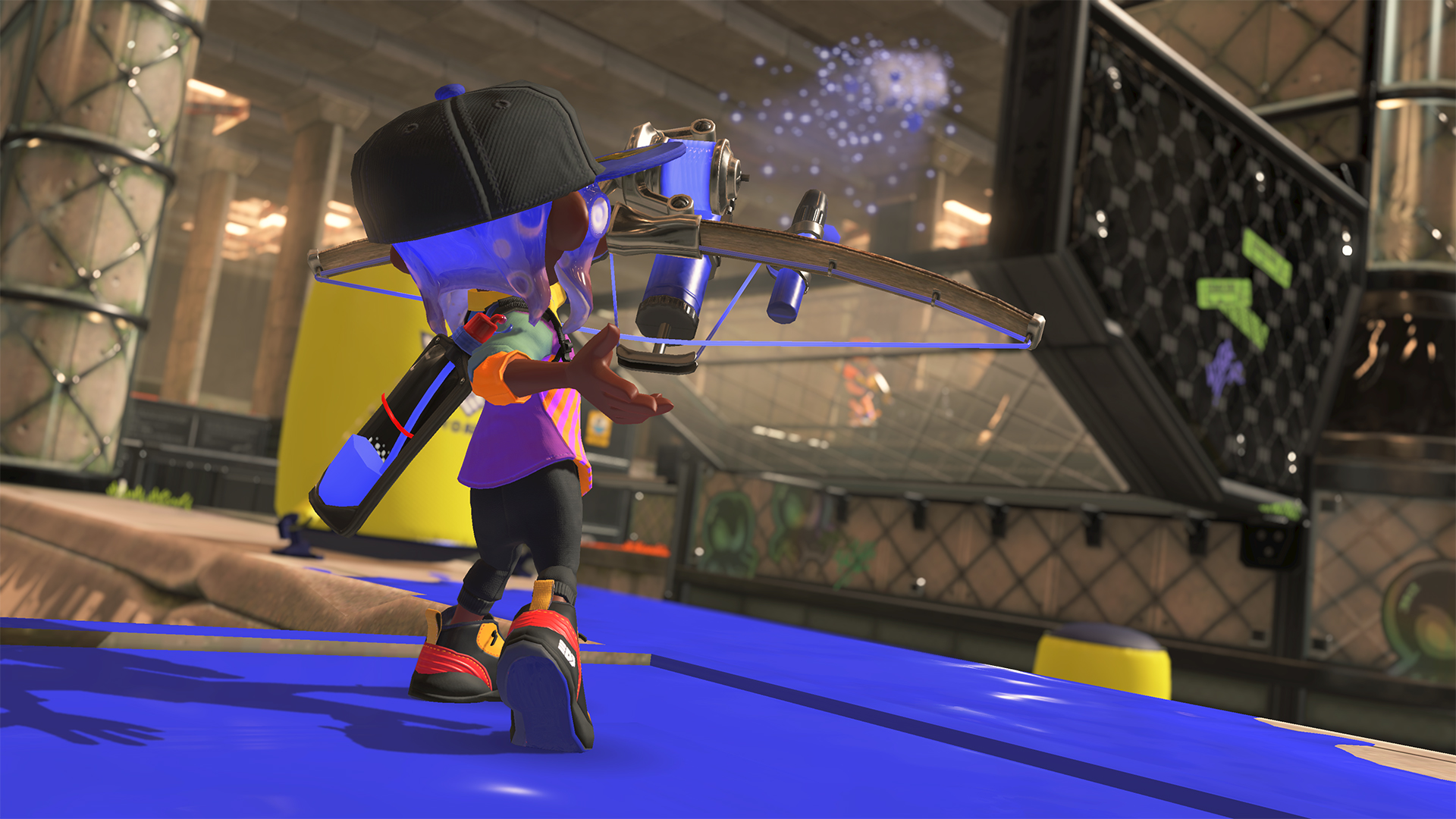 The Tri-Stringer is incredibly satisfying.

I do still have a fair number of questions about the campaign, though. While trailers indicate a decent variety in locations, I can’t comment on the actual story itself. I’m not expecting a riveting tale, of course, but even still, the levels I played didn’t offer any inklings (pun very much intended) on the plot or characters. Further, the Nintendo Treehouse rep playing beside me wouldn’t confirm how long the actual campaign would be. If nothing else, it’s certainly not shaping up to be some lore-heavy affair, which should make it easy to jump into.

An absolute blast with others

With all of that said, I’ve heard that Splatoon‘s single-player content, while by no means bad, is ostensibly training for the multiplayer, and on that front, it more than serves its purpose. Because it’s when we got into said multiplayer that I truly found myself becoming enamoured with Splatoon 3.

Admittedly, it doesn’t seem like a whole lot has changed with Splatoon 3, but I don’t think that’s at all a negative. If anything, the multiplayer landscape has become increasingly saturated in the five years since Splatoon 2, with battle royales, first-person shooters and content-lite live services as a whole dominating the pack. With that in mind, Splatoon 3 doubling down on its mechanically unique blend of co-op and competitive multiplayer offerings feels extremely refreshing. Plus, in a series first, Splatoon 3 finally supports local co-op. 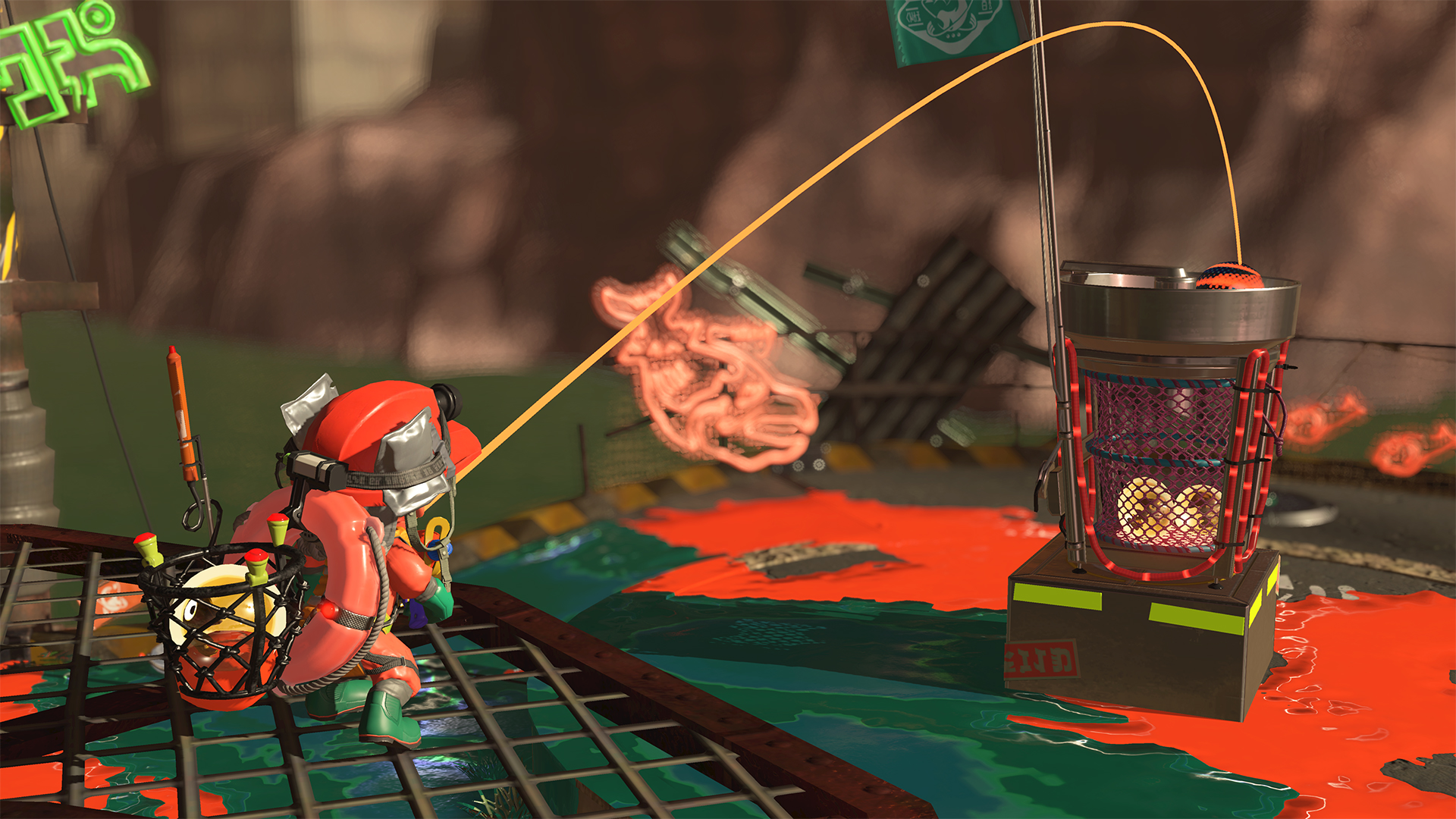 Returning players will no doubt be happy about the ability to throw Golden Eggs in Salmon Run.

After playing a bit of the campaign, we were thrown into Salmon Run, the returning co-op mode from Splatoon 2. To my pleasant surprise, this is the series’ spin on Gears of War‘s popular Horde Mode, in which you and your player-controlled allies must survive against increasingly powerful waves of enemies. This is largely the same as it was in Splatoon 2, which means your team will have to secure a number of Golden Eggs to clear each round. One key quality-of-life improvement, though, is that Splatoon 3 now lets you throw these eggs, which eliminates some back-and-forth frustrations but also feels balanced since it expends a big portion of ink. Thankfully, Salmon Run can also now be played at any time; no longer is it in rotation.

Within moments, I was impressed with how thrillingly frenetic rounds could be, especially as enemies came at me by sea, ground and air. While the stage is fairly simple in its layout, this three-pronged approach adds a welcome layer of verticality, forcing me to go up and down ink-covered walls to defeat enemies, secure eggs and even revive fallen teammates. Our team actually lost one of our Salmon Run attempts when a Nintendo rep upped the difficulty, so it’s good to see that the challenge scales appropriately, particularly when extra tough boss enemies occasionally show up. And as a nice contrast, there’s just something so hilarious and charming about the Salmon Run intro, in which four cartoonish squids get transported to the stage in a helicopter like they’re soldiers dropping into a battlefield. 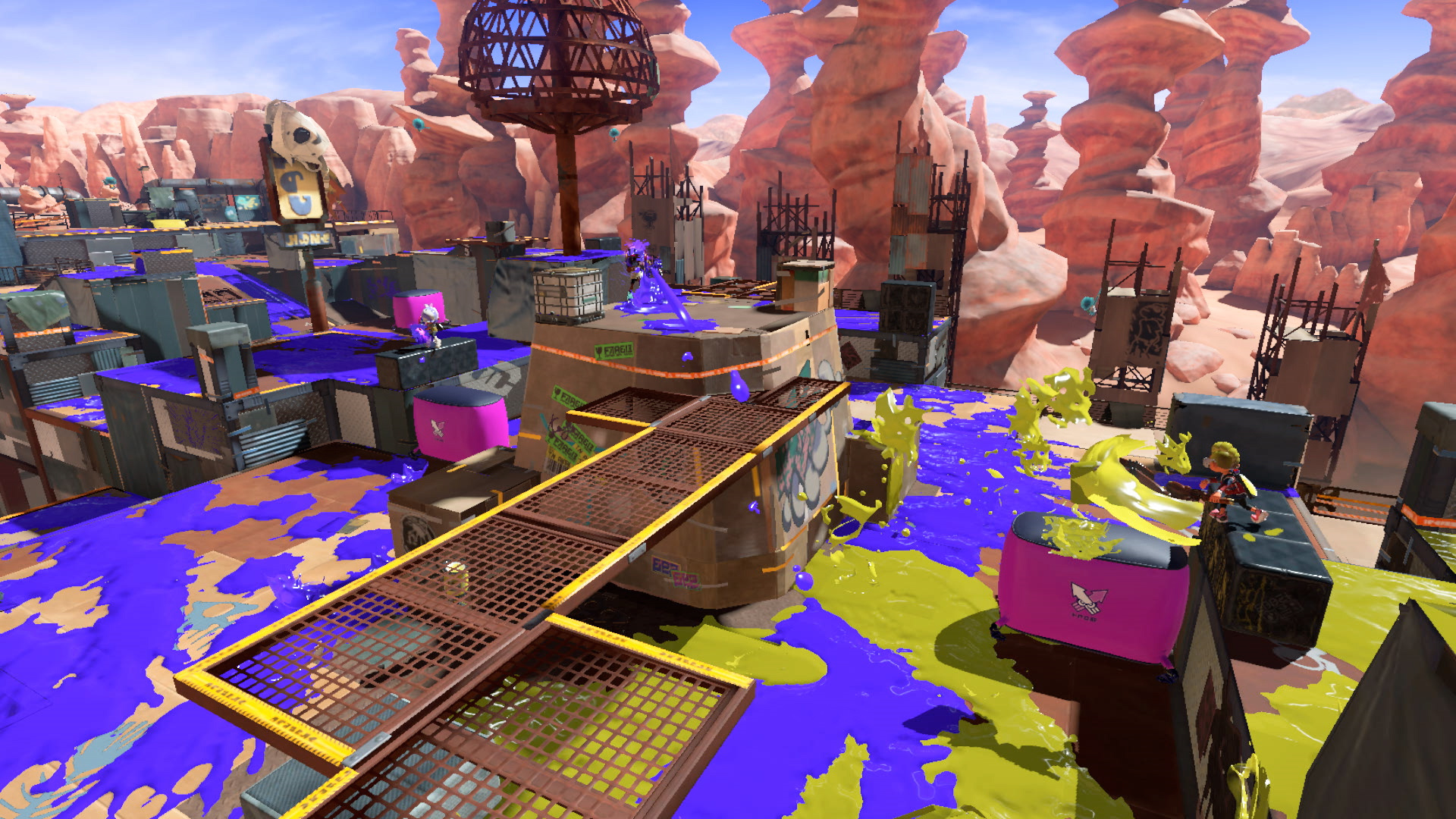 I had just as much fun in Turf War, Splatoon‘s signature competitive team multiplayer mode. While you can kill opposing players and cause them to respawn, the real objective of the match is to coat as much of the stage as possible in your ink. Enemies, naturally, can do the same, so this creates a genuinely compelling ‘tug-of-war’ dynamic. (Seeing the post-game results, wherein the game dramatically delays tallying each team’s total percentage of ink, led to much guffawing all around.) Once again, this mode is primarily unchanged from Splatoon 2; instead, it’s the new weapons that shake things up. In the pre-match loadout selections, I perused the delightful assortment of guns, which included, quite endearingly, an ink-powered NES Zapper.

But I adored one of the new weapons, the melee-focused Splatana Wiper. Zigging, zagging, and swimming my way to distant enemies who were shooting at me to get up close and slash my foes was oh-so-satisfying. If that weren’t enough, you can charge the blade to shoot an ink projectile, which gives it some range and makes it an all-around well-rounded weapon. This doesn’t even take into consideration the many Special Weapons (which become available after painting enough turf), with my favourites being the Crab Tank (a powerful mech-like vehicle) and Booyah-Bomb (teammates can hit the D-pad to say the ‘Booyah’ quick message to power it up like some Dragon Ball Z-esque Spirit Bomb). I kept smiling at how the lineup of Special Weapons mixes singular and team-based offensive abilities with more defensive alternatives like the barrier-enacting Big Bubbler. Shooters can live and die by their weapon variety, and Splatoon 3 consistently surprised me with the inventiveness of its guns. 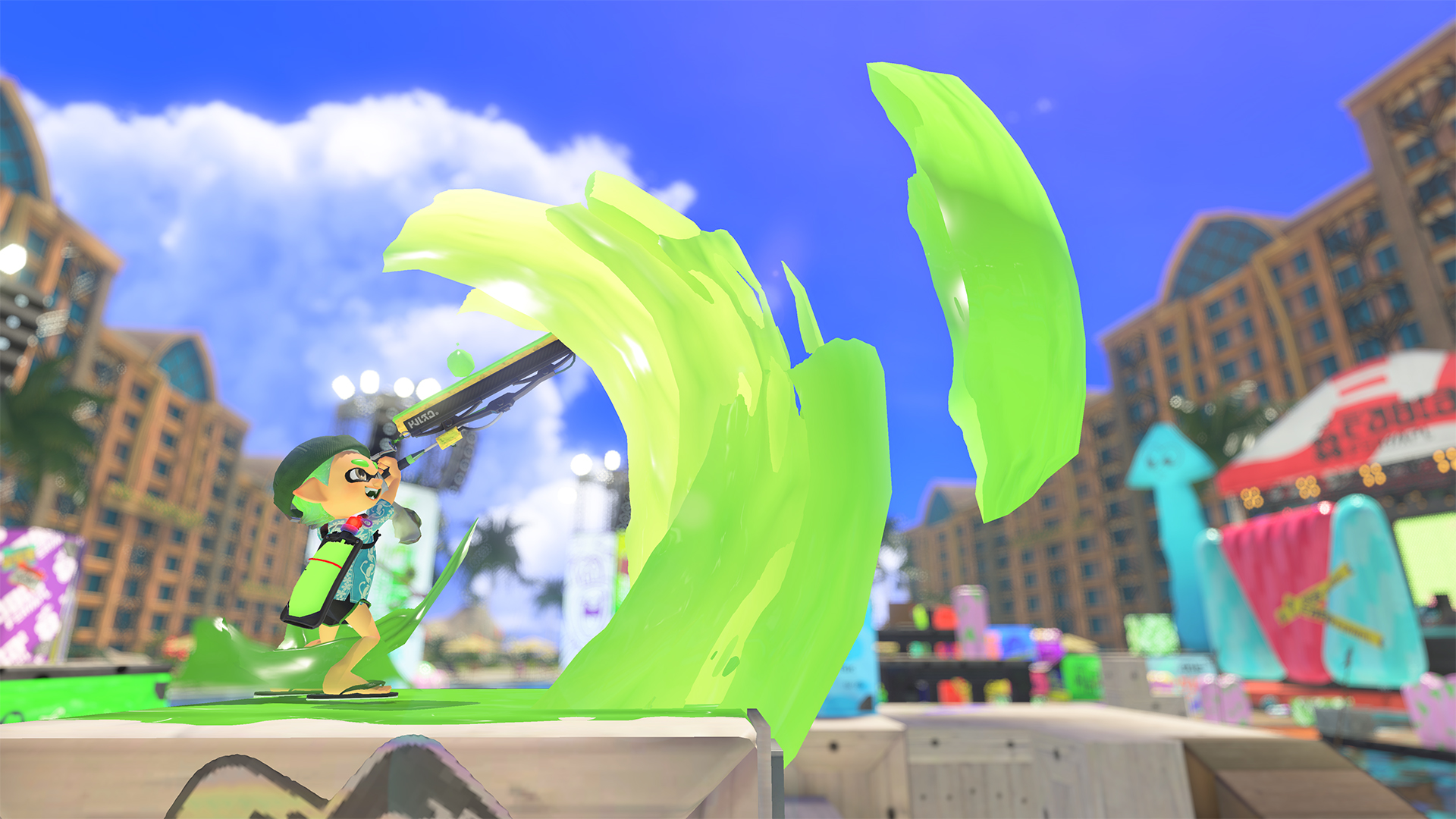 The Splatana Wiper — what’s not to love about a katana that shoots ink?

At the end of our hour-ish preview, I found myself genuinely disappointed that it was over. Amid all of the games I’ve seen and played, Splatoon 3 truly feels like it has its own refreshingly unique sense of identity. As a result, it’s legitimately something that I see myself playing regularly, especially with a friend who just moved far away. Hopefully, the Switch’s notoriously spotty online play will be up to the task. I’m also eager to get more time with everything else that the game will have to offer, including character customization, exploring the Splatsville hub, trying out the card-based Tableturf Battle minigame and more.

I went into my preview with no prior love for Splatoon, and now the series’ third entry is one of my most anticipated games of the fall. Switch owners — keep this one on your radar!

Splatoon 3 will release exclusively on the Nintendo Switch on September 9th. A free limited-time ‘Splatfest’ demo will hit the Switch on August 25th.