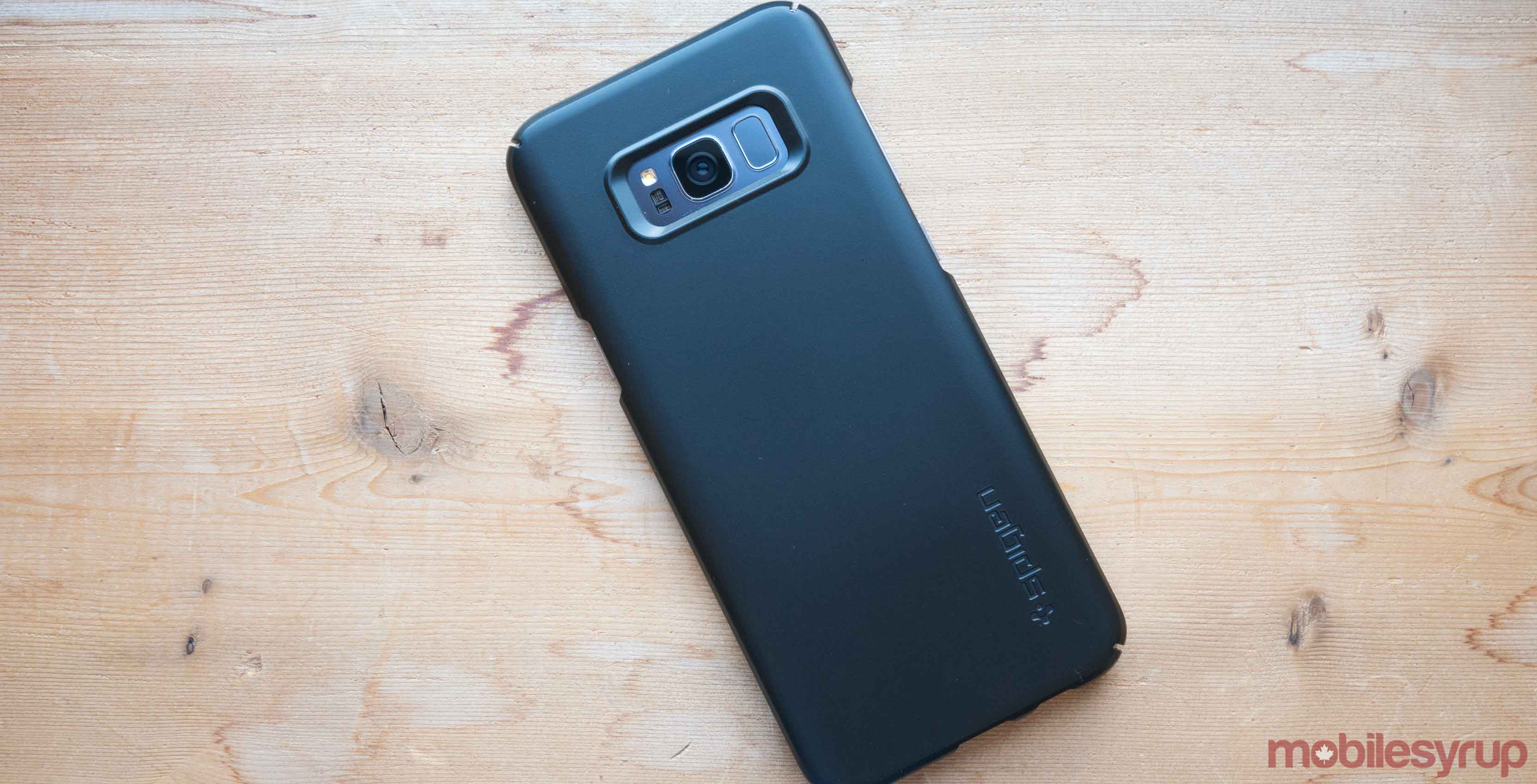 There are hundreds of case and screen protector brands out there, but I find myself always leaning towards Spigen whenever a new flagship smartphone is released.

The manufacturer’s various cases often cost more than other companies, but I’ve often found that the few extra dollars the company’s cases cost is typically worth the cost. While it’s worth noting that I have had some Spigen cases crack or break in the past — they definitely aren’t indestructible, particularly the iPhone ‘Thin Fit’ case — they typically generally last much longer than similar cases I’ve used from other manufacturers.

Given that Spigen sent us its entire case lineup for the S8 and the S8+, I decided to snap photos of each case and put together quick, mini-reviews, weighing their various pros and cons. 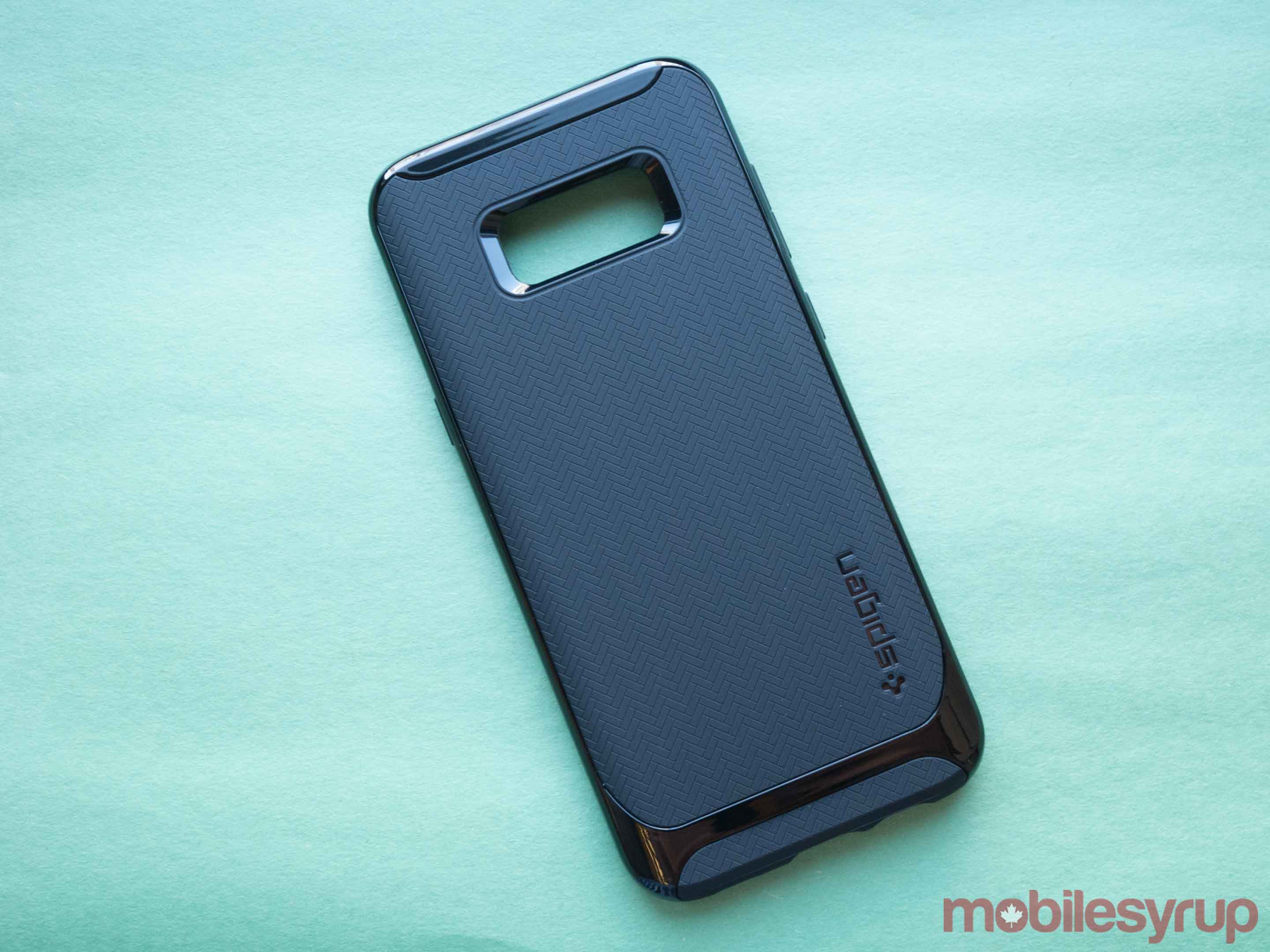 It’s relatively thin and provides ample protection around the entire phone, wrapping around the S8 and S8+’s Gorilla Glass 5 body. The double build of plastic and a rubber bumper make this case a solid balance between maintaining a thin profile, but still offering adequate protection. 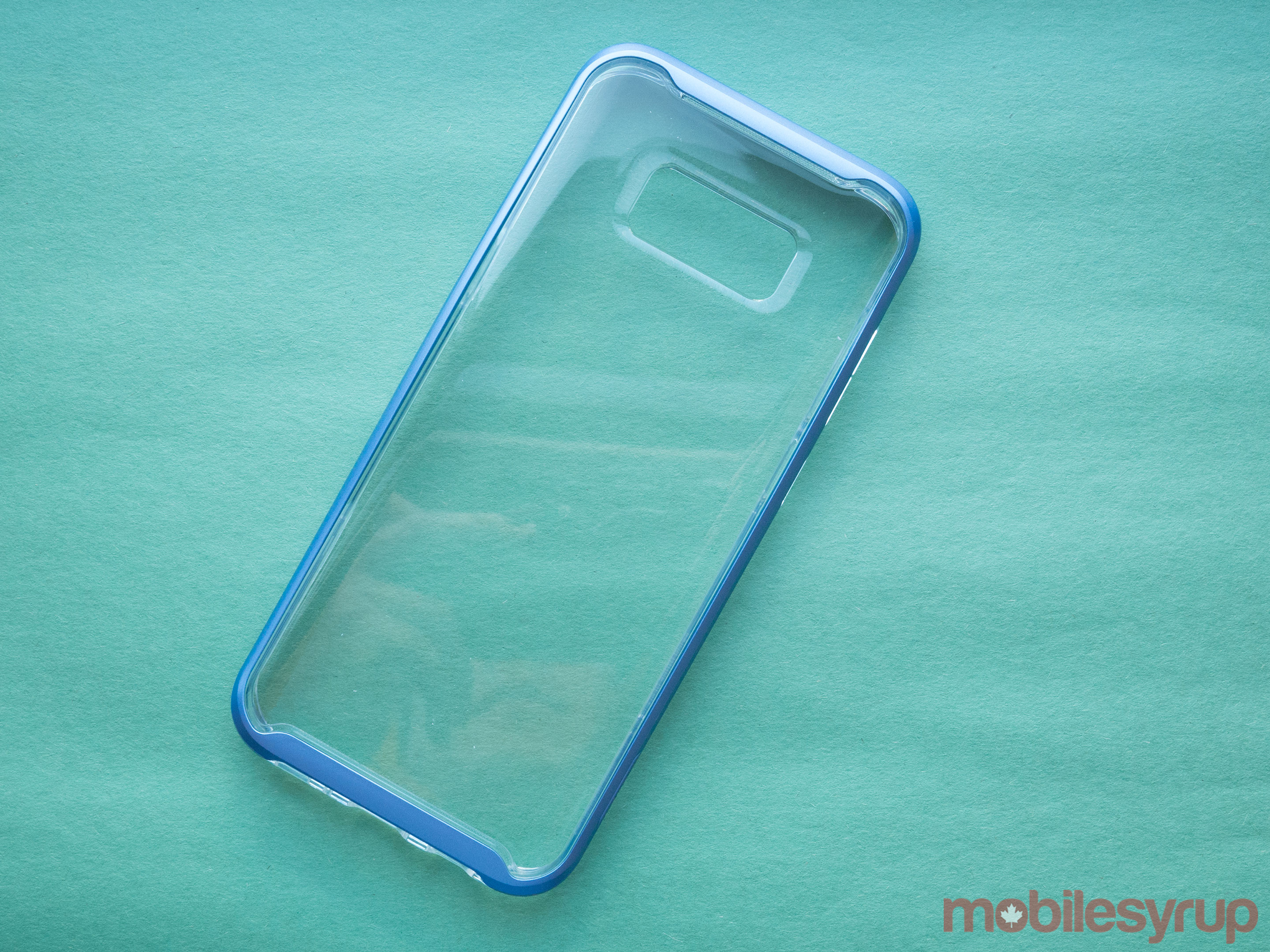 It’s not overly protective and a little bulky, but offers a good balance between Spigen’s thinner cases like the ‘Thin Fit’ and its more heavy-duty offerings. 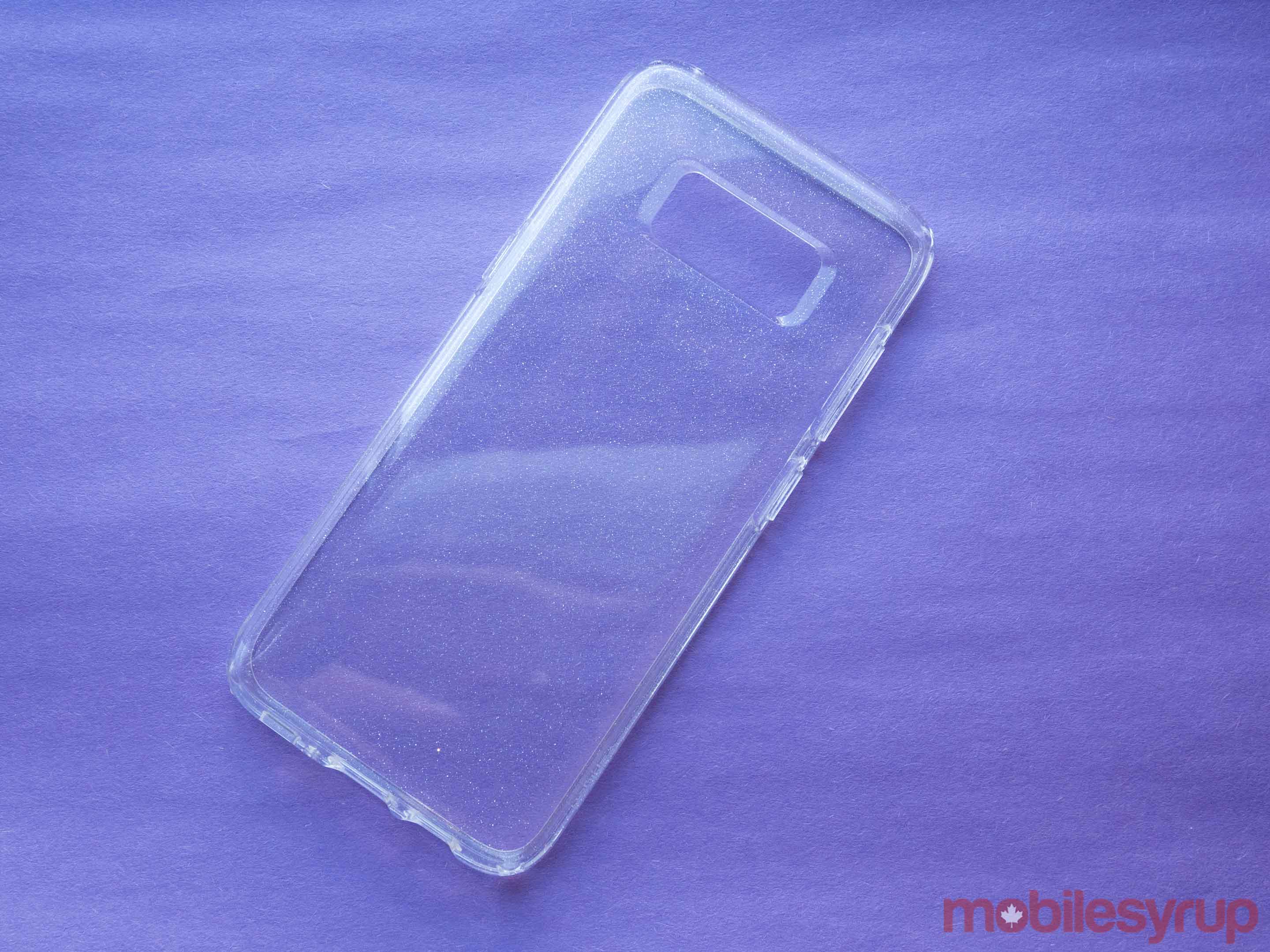 Right off the top, this particular case certainly isn’t to my taste. While it does wrap the sides of the S8’s entire curved display, I’m not a fan of the sparkly sparkles.

Still, if you want a case that’s flashy, unique and also still protects your phone, Spigen’s Liquid Crystal case could be worth your time. The rubber it’s constructed out of does feel a little sticky though, which makes the case difficult to slip into my pocket. 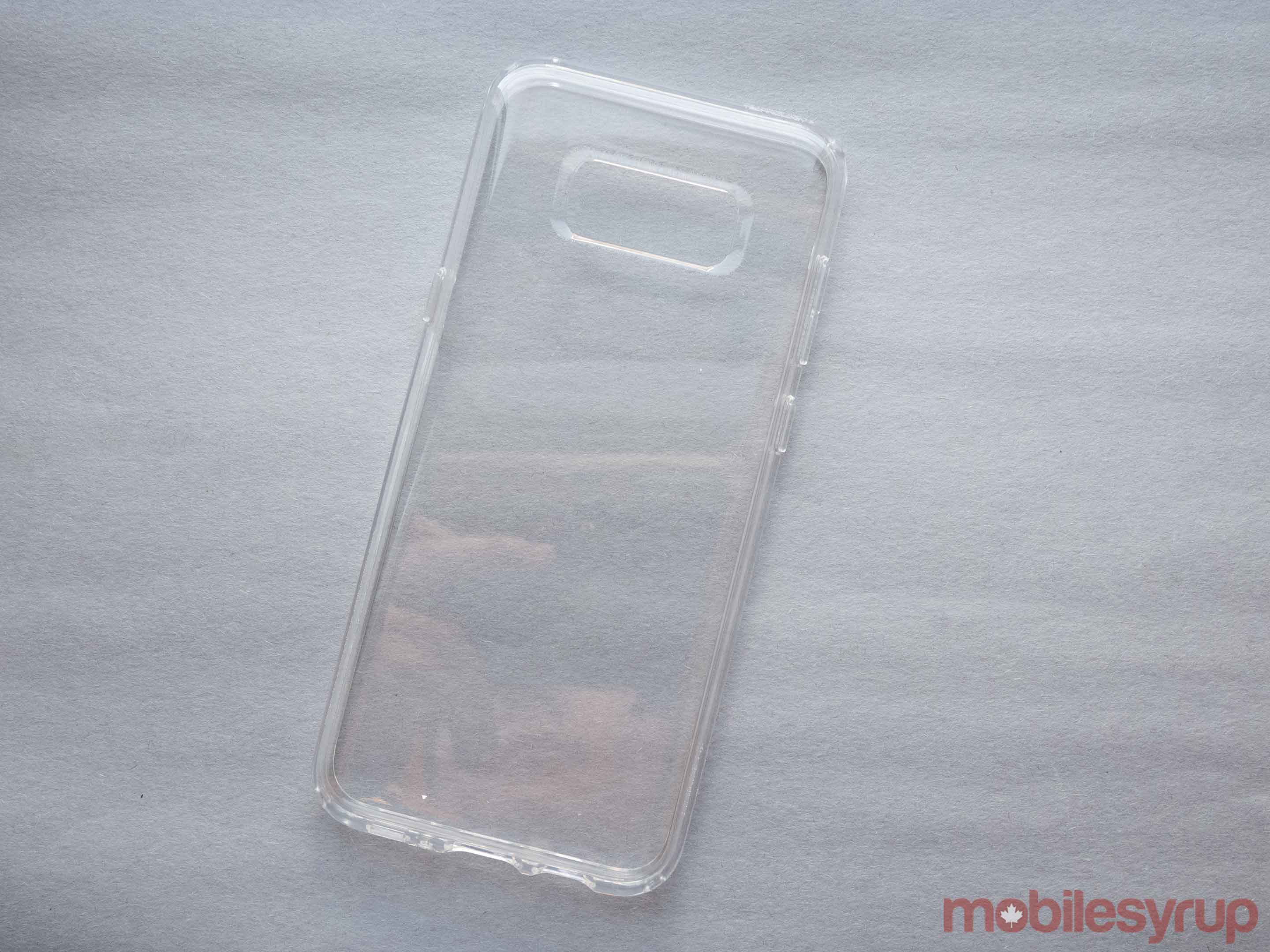 Similar to the Neo Hybrid case, Spigen’s Ultra Hybrid case offers full protection of the S8 and S8+’s curved edges, though the case feels more plastic than rubber, allowing it to more easily slide into my pocket.

My favourite Spigen S8 case is still the Thin Fit, but this one comes in a close second, simply because it offers all-around protection. 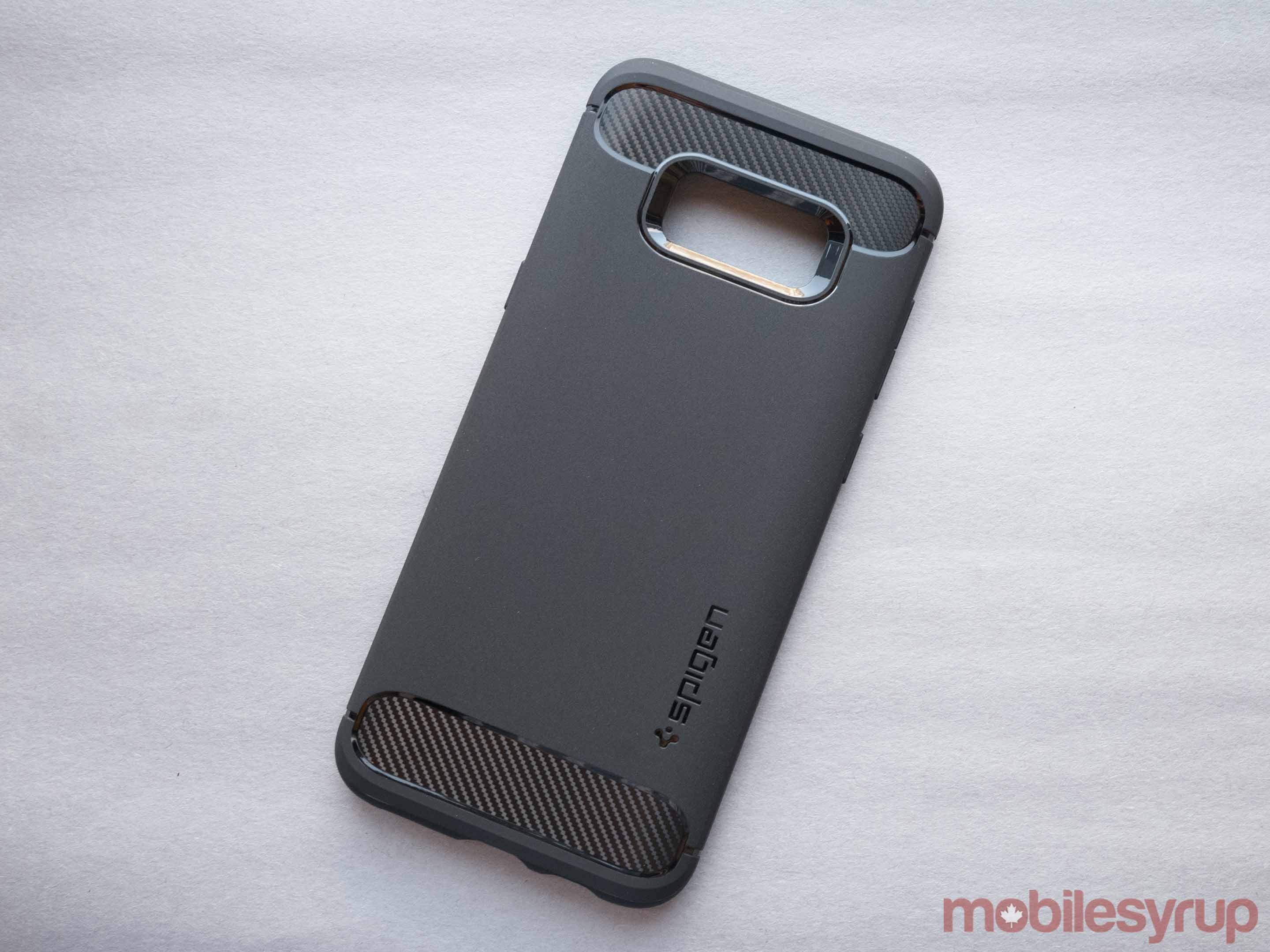 Spigen’s Black Rugged Armor Case, while highly protective, ruins the S8 and S8+’s aesthetic to some extent. If that isn’t a concern for you, however, this case offers a decent amount of protection and minimal bulk.

The rubber material used in the case also isn’t sticky like rubber cases from other companies, which is great for easily sliding the case in and out of your pocket. 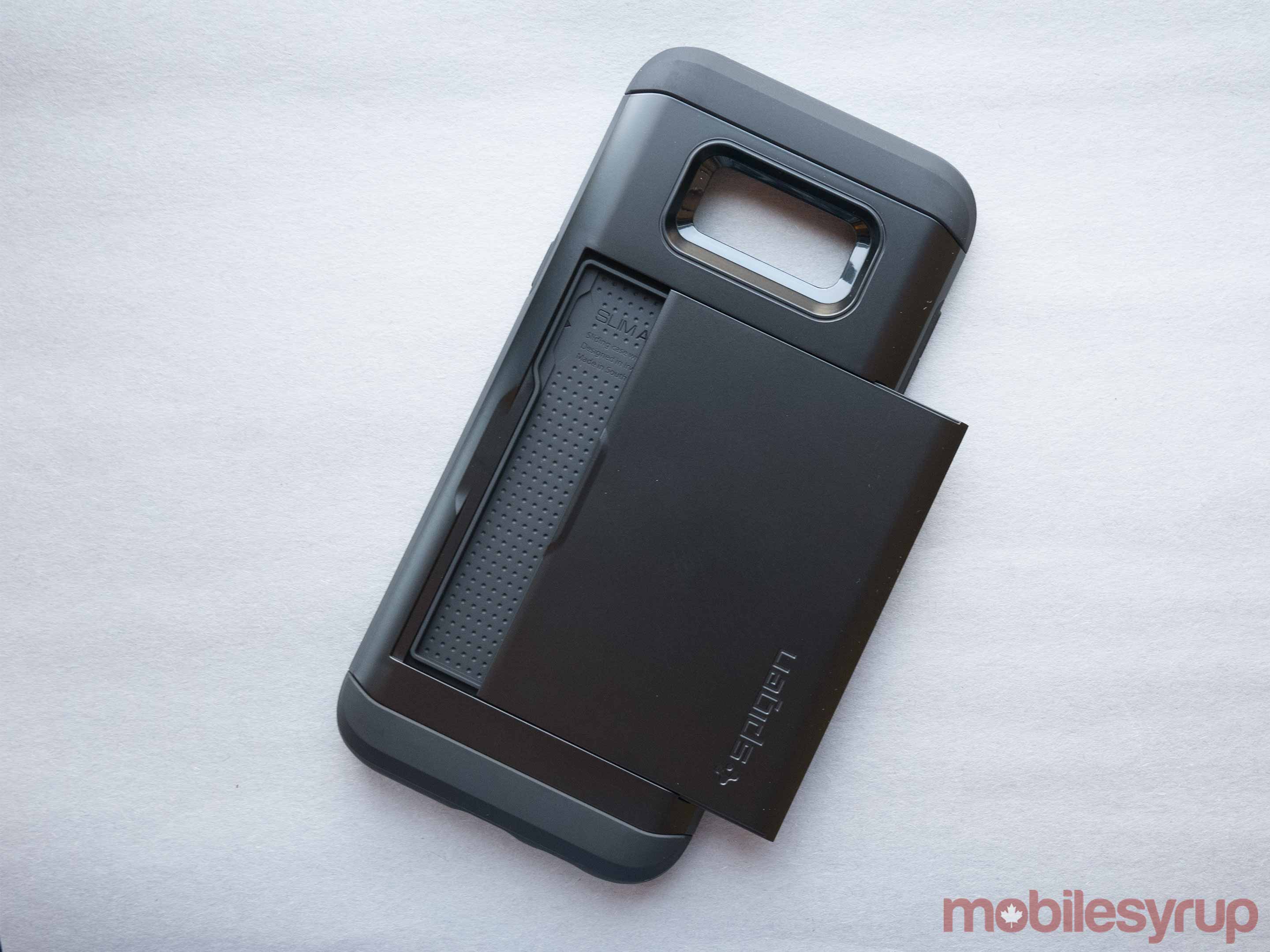 While not for me, I know a number of people who are fans of Spigen’s Slim Armor CS Air Cushion case and use the model with other smartphones. The build feels similar to the Rugged Armor case, though it also features a slide-in slot for a credit card or debt card.

Despite this compartment, the case is still relatively thin, which is unlike similar cases from other manufacturers. 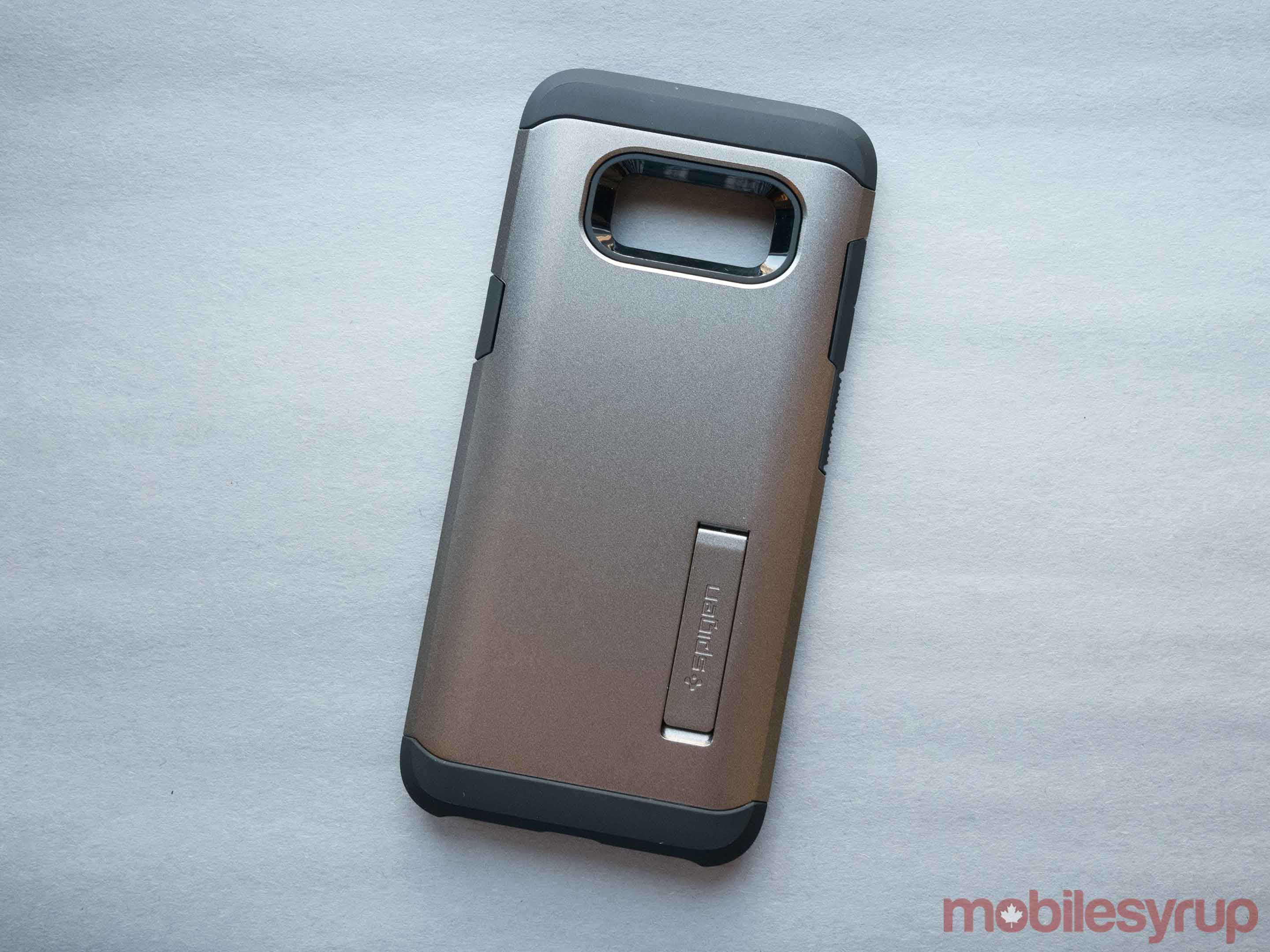 This particular case features a double liner of rubber and plastic, as well as a kickstand. I’ve used this model of case before with past devices and found the kickstand to be very useful.

It is, however, a little more bulky than Spigen’s other Galaxy S8 and S8+ case offerings. 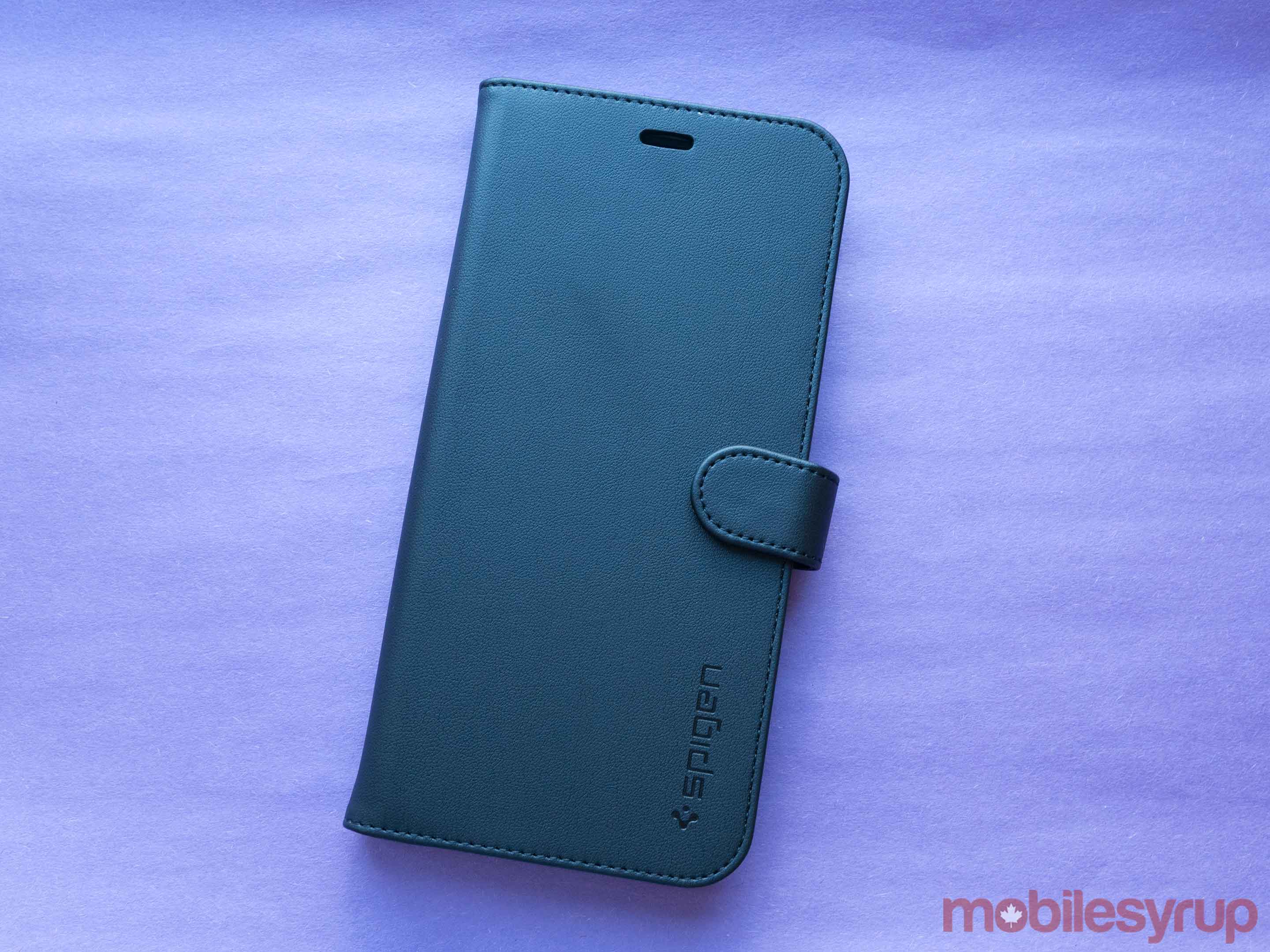 For those who like wallet cases, the Wallet S is great. It features slots for cards in its interior and a magnetic clasp.

Unlike many wallet cases, the Wallet S is relatively thing and while there’s no way it’s actually made of real letter, its faux leather feels like it’s relatively high-quality. 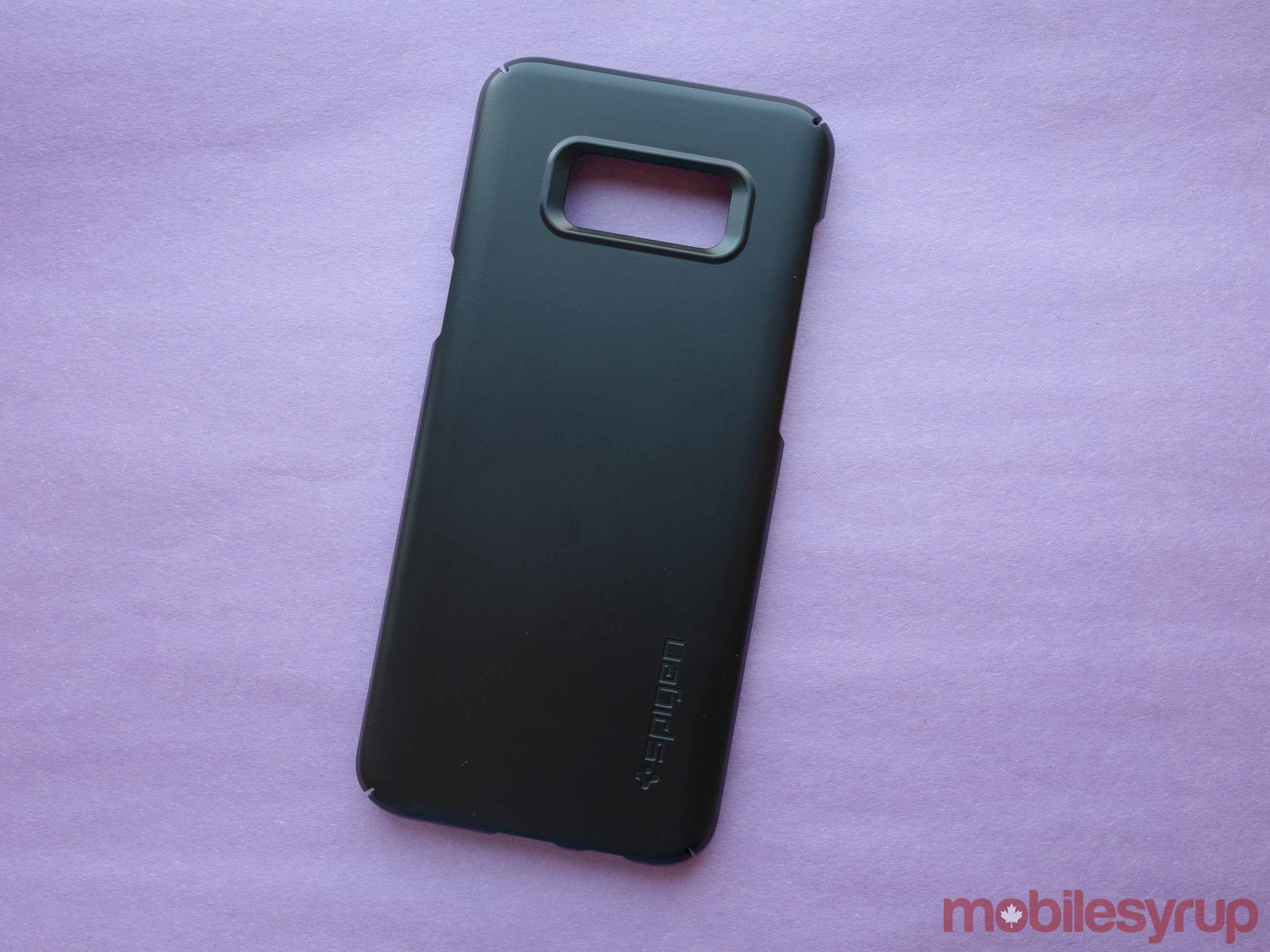 Saving the best case for last, Spigen’s line of Thin Fit cases have been my go-to smartphone enclosure for a number of years now, whether it’s the S7, iPhone 7 Plus or even older devices.

The case offers protection that covers the phone’s entire body but more importantly, it also doesn’t add much additional bulk to the phone — hence the Thin Fit name. This ensures the case doesn’t push up the edges of a screen protector or ruin the S8 or S8+’s unique aesthetic. If you aren’t typically a fan of cases, but have decided to make the jump into the world of people who don’t actually want their phones to break, the Thin Fit is a decent compromise.

If you’re interested in picking up any of these cases, you can find Spigen’s entire Galaxy S8 line up here and the manufacturer’s S8+ cases here.