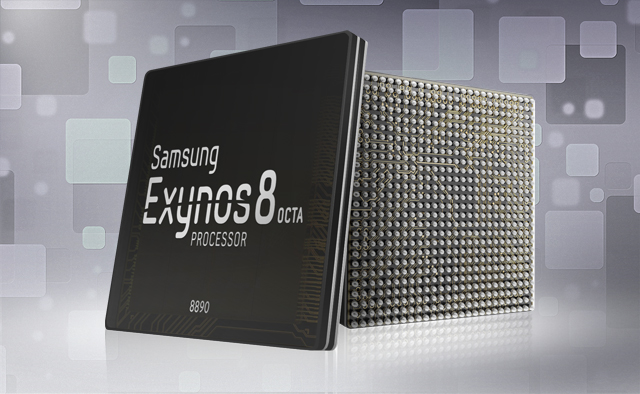 Samsung is hard at work on its upcoming Galaxy S7 smartphone, scheduled for release early next year. We reported earlier this week that one of the S7 variants would be powered by a new custom integrated SoC (system on chip) from the Exynos family of processors and today Samsung is showing off the Exynos 8890 for the first time.

The Exynos 8 Octa 8890 is Samsung’s second venture into a 14 nm process chip built with FinFET technology. However, the main difference between the latest version and the previous generation Exynos 7 Octa 7420 is that the new chip is fully integrated and features a custom ARMv8 CPU and LTE CAT 12/13 modem.

The new CPU will reportedly provide a 30 percent boost in performance and a 10 percent jump in power efficiency compared to the previous version. It also supports enhanced heterogeneous multiprocessing between its eight cores in order to deliver more efficient performance.

Data transfer via the new integrated modem will also get a speed boost, with up to 600 Mbps downloads and 150 Mbps uploads, and the chip features the latest ARM GPU, the Mali-T880.

Mass production of the Exynos 8 Octa is scheduled to begin in late 2015.