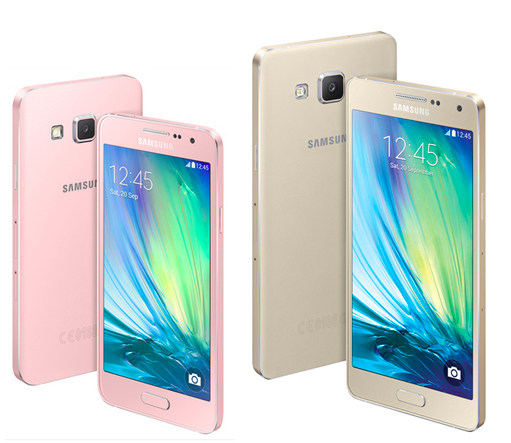 Over the last few months, we’ve seen Samsung slowly move toward metal construction for its smartphones. The Galaxy Alpha were the first and we expected the company to expand the number of metals in 2015. However, Samsung has sprung a couple of surprises on us today with the unveiling of two new devices, both of which feature a metal unibody design and measure less than 7mm thick.

The Galaxy A5 and the Galaxy A3 follow Samsung’s MO of releasing numerous demographic-specific devices geared towards different ages and markets in addition to its flagship phones. The A3 and A5 are supposed to be for young people with an affinity for social media. To that end, Samsung has a bunch of social media-friendly settings baked into the camera app, including beauty modes for smoothing out your skin, multiple selfie modes for both the front- and rear-facing cameras, and the ability to create animated GIFs. The A3 and A5 will also be available in multiple colours (Pearl White, Midnight Black, Platinum Silver, Soft Pink, Light Blue and Champagne Gold).

Camera and colours aside, the most notable feature of these phones is their metal unibody design. Up until now, Samsung has only experimented with metal frames and plastic backings for its phones. The A3 and A5 are Samsung’s first all metal smartphones, and they measure 6.7mm and 6.9mm thick, respectively.

What Samsung doesn’t talk about is pricing, which is really one of the most important factors when building a smartphone for young people. Luckily, Samsung hasn’t tried to price its current metal phones at a premium just because of their design. We’re hoping that means these phones will be affordable enough for their intended demographic.

Whether or not these phones will be available in Canada is another story entirely. The company said the A3 and A5 will launch in ‘select markets including China’ in November. Let’s hope Canada is one of them. In the meantime, you can watch good looking young people use the A3 and A5 in the promo video below: