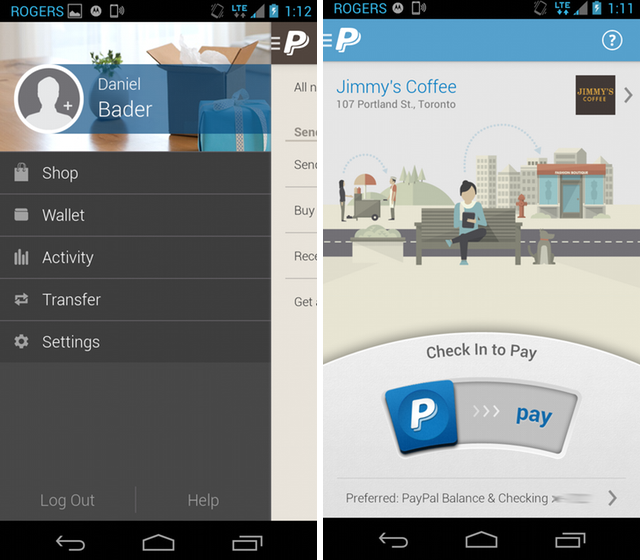 The next time you go into a coffee shop, fast food restaurant or retail outlet, you could pay your way without ever opening your wallet.

PayPal has released an update for their iOS and Android apps that promise to make it really simple to check in and pay, a rather satisfying gesture that can be accomplished in a few taps. We covered the rollout of PayPal’s Toronto-based pilot project with Jimmy’s Coffee last week, and the refreshed apps put that interface front and centre.

Once you’ve entered the app, you’ll see a new tab in the slide-out menu: Shop. Based on your location, a list of outlets will populate that have deals in place with PayPal already. Tapping on one reveals a blue “P” logo that must be swiped to the right to initiate the payment process. You’ll want to add a photo so the cashier can identify you; from the back-end, the cashier must sync your check-in with TouchBistro’s POS, which appears on their system, with your order. The funds are taken from a PayPal balance or associated debit or credit card.

Both apps have been redesigned, but it’s the Android app that’s especially pretty. It adheres largely to the updated Holo guidelines set forth by Google, with a vertical “hamburger” icon to prompt swiping from the left side of the screen. The app uses a clean Roboto-esque font throughout, and the legacy functionality, from transferring money to friends to reviewing account activity, have also been overhauled.

Nearly half of Canadians will shop on social media this holiday: survey