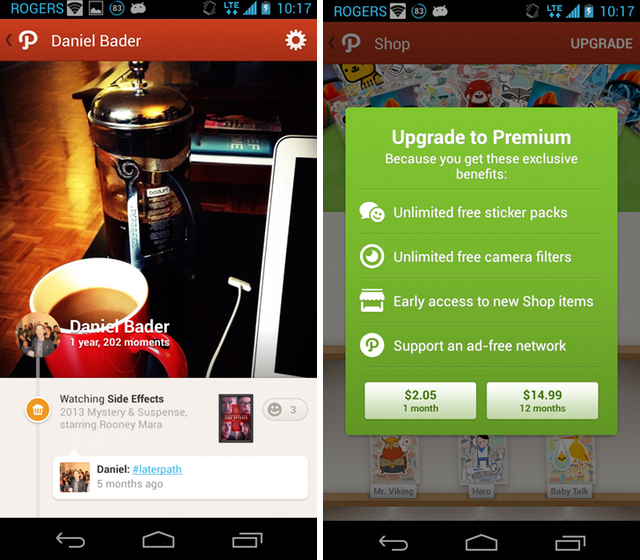 Path is a big social network for a small subset of people: those who want to keep their missives for close friends, family, or a combination of the two. With a maximum of 150 users, Path has turned into the anti-Facebook, a contained, mobile-only social network that reads more like an expansive messaging app.

With version 3.2, Path has unveiled its plan for monetization: a monthly or yearly subscription model that offers users unlimited stickers and camera filters, in-app purchases that the company began selling a la carte last year. While it won’t say how many of those one-offs have been sold to date, the company says that its 20 million members are obsessed with stickers, as are users of other messaging apps like Facebook Messenger, Line and Kik.

Path’s Android app offers a 1-month subscription for $1.99 and an annual rate of $14.99; the iPhone version asks $4.99 for a 3-month bite and $14.99 for 12 months. Whether this will be the move that gets Path in the black remains to be seen, but version 3.2 adds a couple other interesting features, too.

Inner Circle is the further compression of the small sharing group: it allows users to choose 10 of their closest pals to share updates with, kind of like a social networking Fab 10. Paying for the app also eliminates ads, something that we’d be happy to see go from the mobile service. Whether it’s enough to convince users to return to the service — privacy mishaps lead to an exodus last year — remains to be seen.

Path will shut down on October 18