RIM’s VP of Developer Relations says “Android and iOS they are no go for you!”

Alex Saunders, RIM’s VP of Developer Relations, has taken the stage for the kick off of “BlackBerry 10 Jam.” He stated in an opening song (which was amazing) that “the waiting is the hardest part,” along with “Android and iOS they are no go for you!,” “there’s so much excitement behind BlackBerry 10.”

1:12pm: BlackBerry 10 is a game changer. BlackBerry 10 is for the app hungry
1:13pm: Saunders says BlackBerry 10 is about “Flow, Connect and Extend”
1:15pm: RIM gave out over 20,000 PlayBooks with their dev promo
1:20pm: There are 99,500 apps submitted in the BlackBerry App World
1:26pm: Margaret Glover-Campbell, Poynt SVP, is on stage to talk about BB10 integration
1:27pm: Poynt will have seemless integration
1:29pm: Saunders says that “as we get closer to launch over the Summer”
1:32pm: RIM will be taking the BlackBerry 10 Jam experience on the road, showing the OS to people
1:33pm: They will be hiring people to help this process, no word on how many people will be added
1:35pm: BlackBerry Jam Rewards program announced, launching today (win free trips etc…)
1:36pm: RIM will also be having a “Certified” app program that ensures your app is of high quality.
1:37pm: with the certified app, RIM ensures that you’ll earn $10 in the first year. If not they will write you a check for you for the outstanding amount.
1:41pm: The “BlackBerry 10 Jam World Tour” is coming to Toronto and Montreal
1:54pm: Anders Larsson of The Astonishing Tribe is on stage
1:56pm: Showing off the pictures app and weather. Looks smooth
2:17pm: RIM showing Cascades UI Elements & BlackBerry 10 Homescreen features
2:18pm: Wikitude up on the stage, showing off their app
2:23pm: Magmic is showing the Texas Holdem’ Live, already has 2 million registered users. Various handsets are being used: BlackBerry 5, 7, PlayBook, and BB10 being connected.
2:43pm: Alex Saunders said that any dev who creates a BB10 app, sends back dev device will then receive a limited edition edition BB10 device when BlackBerry 10 officially launches. Now that’s taking care of the dev.

We’ll update as the presentation rolls on… 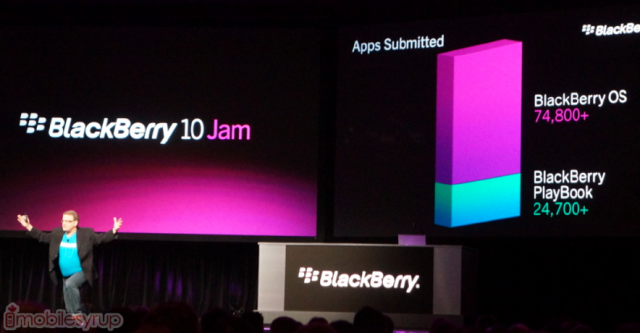