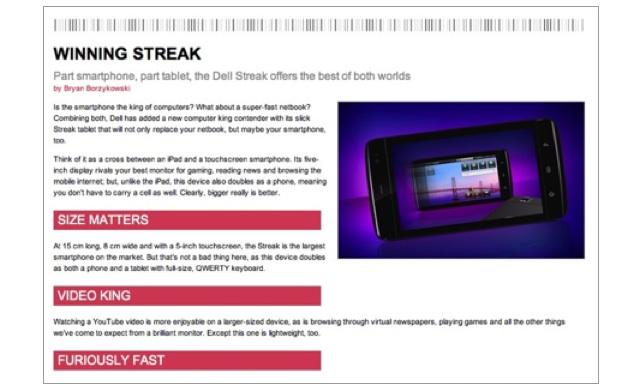 This is interesting. If you gander over to the Rogers publication URMagazine you’ll see a bunch of new write ups such as the Torch 9800 and the upcoming Galaxy S Captivate. But the most intriguing is the full write up titled “Winning Streak” that highlights everything good about the Android-powered smartphone/tablet Dell Streak. There is no official confirmation that Rogers will be releasing this… but it’s a good indication that it’s on the way if they’ve taken the time to promote/advertise it.

The write up says that we should “Think of it as a cross between an iPad and a touchscreen smartphone. Its five-inch display rivals your best monitor for gaming, reading news and browsing the mobile internet; but, unlike the iPad, this device also doubles as a phone, meaning you don’t have to carry a cell as well. Clearly, bigger really is better”. Specs are impressive with a 5-inch touchscreen WVGA display (800×480 resolution), 5 megapixel, auto-focus with dual LED flash; plus front-facing VGA camera, holds up to 32 GB with microSD card, GPS, Bluetooth, Wi-Fi , weighs 220 grams and runs Android OS 1.6 (?). There is talk that the Streak will be upgraded to 2.2 later this year.

UPDATE: Yup… it seems that the Streak is coming to Rogers. Thanks to our friends over at Phandroid for posting an internal doc that shows it coming out in November. Check it out after the break. 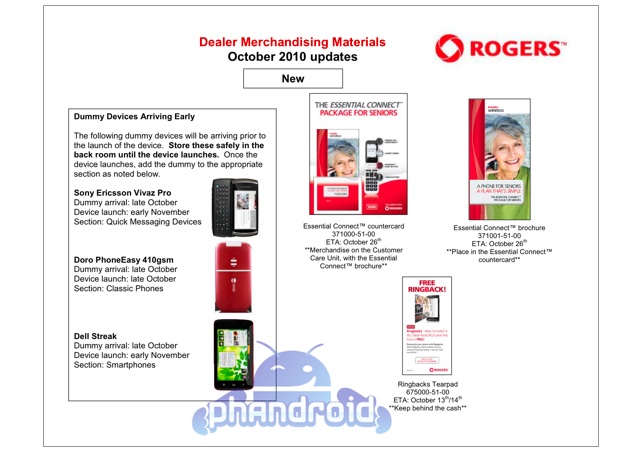 See it here at URMagazine