The online-only event will take place at 2pm ET

Google has finally sent out invitations to its long-awaited Made by Google event for September 30th.

The online-only event will be held at 2pm ET/11am PT. At this Made By Google event, the company will showcase new Pixel phones, new Chromecast and a new smart speaker, according to the invite. 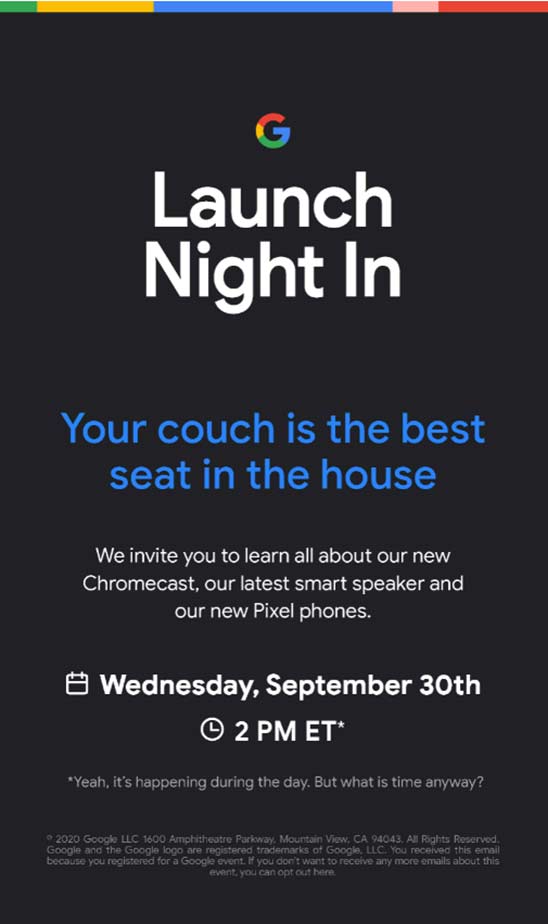 We’re expecting to see the Google Pixel 4a 5G and Pixel 5 that the company showcased back at the beginning of August.

Following that, the tech giant is will likely unveil a new Android dongle with the rumoured name ‘Chromecast with Google TV‘ that supports 4K HDR and Dolby Vision. Furthermore, it’s expected the device will sport a remote for the first time on a Chromecast.

Lastly, the Alphabet-owned company is rumoured to use the Made by Google event to finally reveal more about its replacement for the original Home smart speaker. Google revealed press images for this speaker back in July, but it has yet to make the official announcement.

At this moment we’re not expecting to see much else from the Google, but I’m hoping that the company has a secret Pixel 5 XL or something up its sleeves for this announcement.