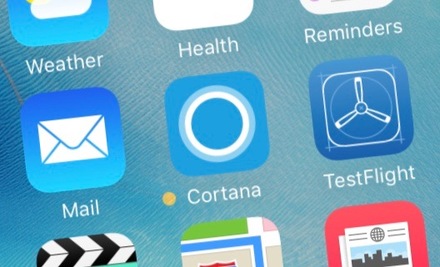 Microsoft has started rolling out a beta version of its Cortana personal assistant app to iOS devices, according to a number of testers who have gained access to the Siri and Google Now competitor through Apple’s TestFlight program.

Like the Android and Windows Phone version of the app, the iOS iteration of Cortana allows users to conduct voice searches, set reminders, track things like flights, packages and send emails and texts.

Microsoft’s intention to release Cortana on iOS was revealed earlier this month when the company made a call for beta testers via an online survey. It’s still possible to take said survey for a chance to get in the beta test, though due to TestFlight’s 2000 tester limit, it’s unlikely anyone who hasn’t already filled out the survey will gain access to the test.

Under Satya Nadella Microsoft has moved to aggressively make its apps and services on competing platforms. With Cortana specifically, Microsoft has attempted to position the personal assistant as a viable alternative to Google Now on Android. In September, Microsoft partnered with Cyanogen to make Cortana the de-facto personal assistant on the latter’s alternative take of Android. One month earlier, the company made it possible, though a beta software update, for Android users to launch Cortana with the swipe up gesture normally used to start Google Now, effectively allowing those on Google’s operating to use Cortana as their go-to personal assistant.