With no fanfare at all, Telus has relaunched Public Mobile as a SIM-only carrier capable of doling out flexible, no-fixed-length smartphone plans.

The once-budget CDMA carrier was purchased by Telus back in 2013, with its customer incentivized to migrate away from the aging network technology with discounted smartphones running on Telus’s faster, more capacious HSPA+ network. Then it went away for a few months, reemerging in February with a slick rebrand and promises of “self-serve value”.

Now, capitalizing on the Bring Your Own Device (BYOD) trend, Public Mobile has relaunched to the, well, public, with free SIM cards and customizable plans that omit the often-heavy prices of subsidized smartphones, and their retail distribution.

The plans vary from 10 to 30 to 90-days, each offering their own advantages and data allotments. All of them come with call display and voicemail. 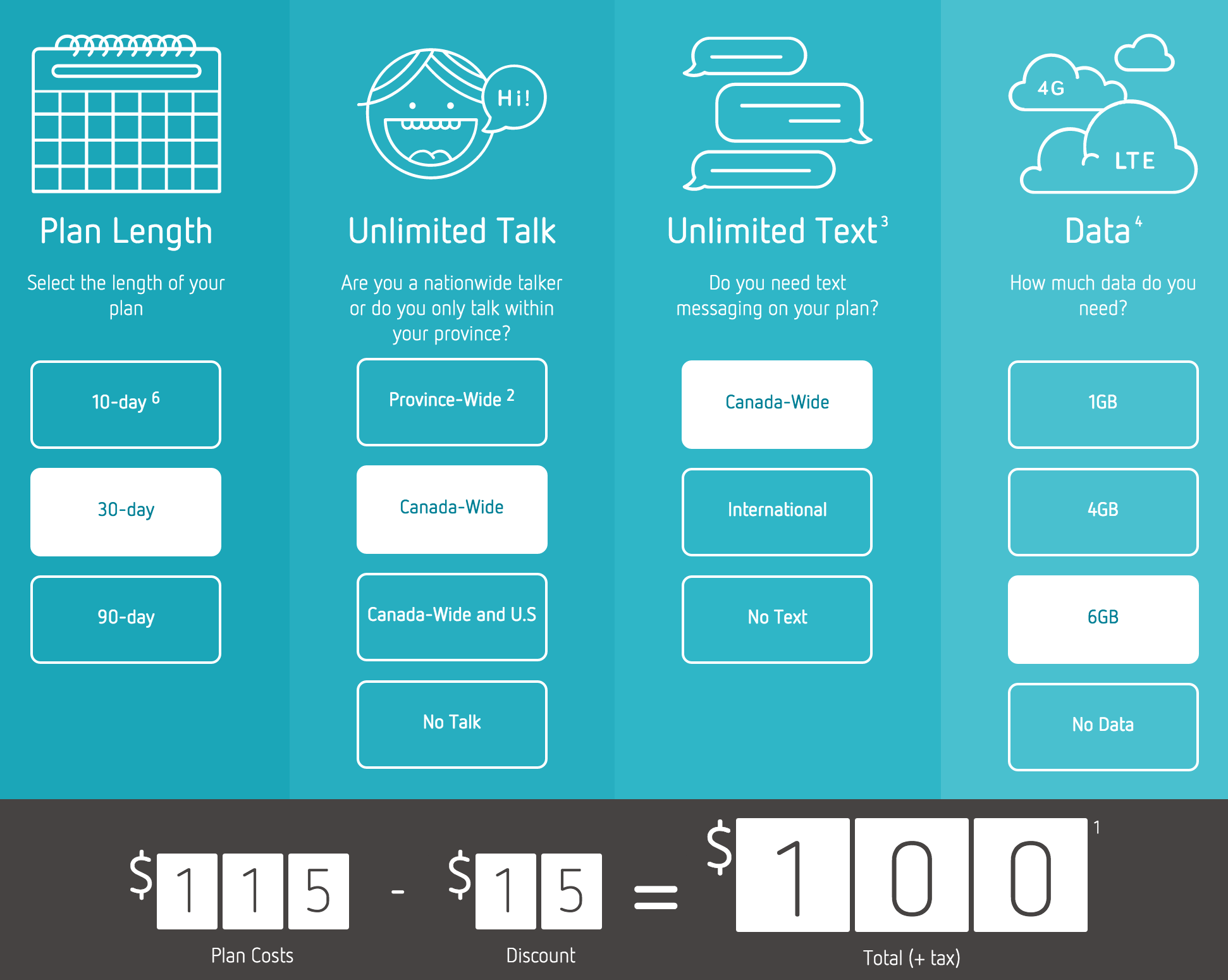 Compared to a typical plan from Koodo, which runs on a similar no-subsidy financing model, Public’s 30-day plans are not much cheaper: a month-long plan with unlimited national calling and texting and 4GB of data cost $80; the equivalent Koodo plan is $75 for 3GB of data or $90 for 5GB (Koodo doesn’t offer a 4GB option, likely on purpose).

Things get interesting when you increase that plan length to 90-days. With the option to increase data to 12GB, which with unlimited Canada-wide calling and texting costs $210, you’re getting 4GB of data per month for $70. Of course, the difference is that one is given that data all at once, so it’s up to the user to dole it out as he or she sees fit.

And there are no overages, because Public Mobile is a pre-paid carrier: Simply have the requisite funds in an account and the balance is debited each month. Data adds-ons, which can be purchased piecemeal, start at $10 for 200MB and rise to $30 for 1GB, which can be administered from a bare-bones Self Serve area of the website.

Public Mobile is also banking on users choosing calling and texting bundles, since it offers discounts when more than one feature is included. For example, it costs nothing to add texting to a 30-day plan with calling, since Public provides a $5 discount for adding one feature, and $15 for adding three. On a 90-day plan, the discounts are tripled.

Since Public’s network is actually Telus’s network, the coverage should be extremely robust throughout Canada, on both HSPA+ (3G) and 4G LTE. Public requires that users enter their device’s IMEI number (a unique identification code) before signing up for service, since not every device will work on the network. One stumbling block that will need to be overcome, too, is the need for an unlocked device; since Public won’t be selling devices directly to consumers, anyone coming from another carrier with an existing smartphone will need to find a way to unlock it. Sites like MobileInCanada have been freeing phones for years, but iPhones will need to be unlocked directly through one’s carrier at prices up to $50.

Public Mobile’s last differentiator is something similar to the just-eliminated Fido Dollars and Rogers’ First Rewards: a program that offers discounts based on the length of a customer stays with the carrier. Public customers receive $1 off their bill every 30-days after the first year; and pre-authorized payments receive a $2 discount every 30-days. Community participation, too, is a reward-earner.

The company is shipping SIM cards for free at this point, and it’s easy to port over a number from another carrier. It’s unclear how heavily Public Mobile will be advertised in the coming months, but it’s clear this is a differentiator for parent company, Telus.