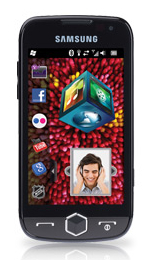 Apparently the 2010 Vancouver Olympics has an operating budget of $1.75 billion and sponsors are making the most out of the experience. Everything from beds, drinks, clothes and cellphones organizations are jumping on board.

Samsung is the official mobile sponsor with the official device of the Olympics being the Omnia II. Samsung will be providing 9,200 units but apparently staff and volunteers are not happy with the Windows Mobile powered device. Some are saying they want to use their BlackBerry instead because they “are frustrated with the touch-screen devices, saying key functions like sending and reading e-mail are nearly impossible”. The organizing committee has been a bit flexible but state they have a choice between the Omnia or a Vice. Those who don’t want to change have found was to use their Berry discretely.

Howard Thomas, director of corporate marketing for Samsung Electronics Canada said “We expect the Vancouver 2010 Olympic Winter games to generate more wireless content than any previous Olympics… It is our goal to help people – from athletes to spectators, officials to volunteers – capture and share this content with others around the world.”    Via: CTV