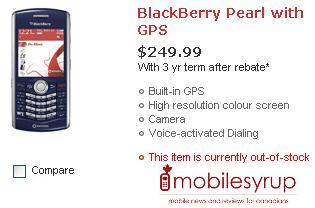 About a month of speculation, Rogers has officially released the sleek BlackBerry Pearl 8110 smartphone and is available in blue – however – their website says they are “Out of Stock” already.

One of the main features of the 8110 is that it includes a built-in Global Positioning System (GPS) with mapping software. Along with the usual features a BlackBerry comes with, this has been enhanced to include word completion and a spell checker, exceptional mobile messaging. Inside the box this comes with stereo headset, travel charger and a
1GB microSD memory card.

The BlackBerry Pearl 8110 retails for $249.99 with activation on any combination of 3 year voice plan and 3 year BlackBerry data plan from Rogers.

“As the leading wireless carrier in Canada, Rogers is thrilled to offer the BlackBerry Pearl 8110,” said John Boynton, Senior Vice President and Chief Marketing Officer, Rogers Wireless. “When we first launched the original BlackBerry Pearl in October 2006, it instantly became one of our most popular devices. We have a history of bringing best-in-class handsets as a Canadian first and the new BlackBerry Pearl 8110 is the perfect example with its enhanced functionality sleek interface and brand new colour.”

“Built-in GPS adds another powerful and practical dimension to the user experience,” said Mark Guibert, Vice President, Corporate Marketing atResearch In Motion. “The new BlackBerry Pearl 8110, with its stylish design and impressive communications, multimedia and navigation capabilities, is an exceptional smartphone for both business and personal use.”