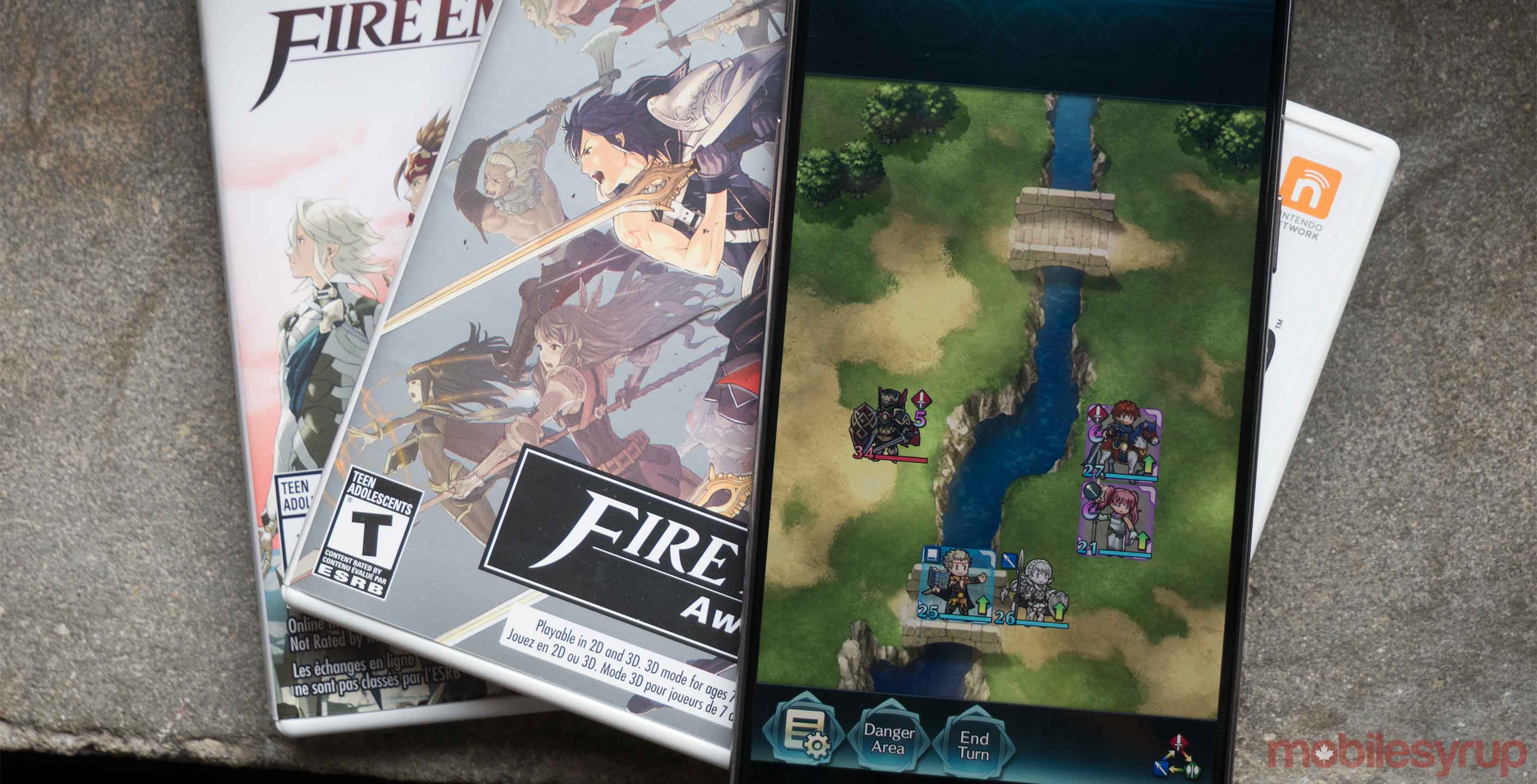 So it’s safe to say that for a lot of people, MobileSyrup readers included, Heroes is their first interaction with the series. Thankfully, if there’s one thing this website has, it’s a Fire Emblem expert. I’ve been a fan of the series since 2012’s Fire Emblem Awakening. I decided to put together this piece to help new Fire Emblem players.

Note that these tips assume you’ve at least played the game’s tutorial.

Pay attention to the weapon triangle when building a team 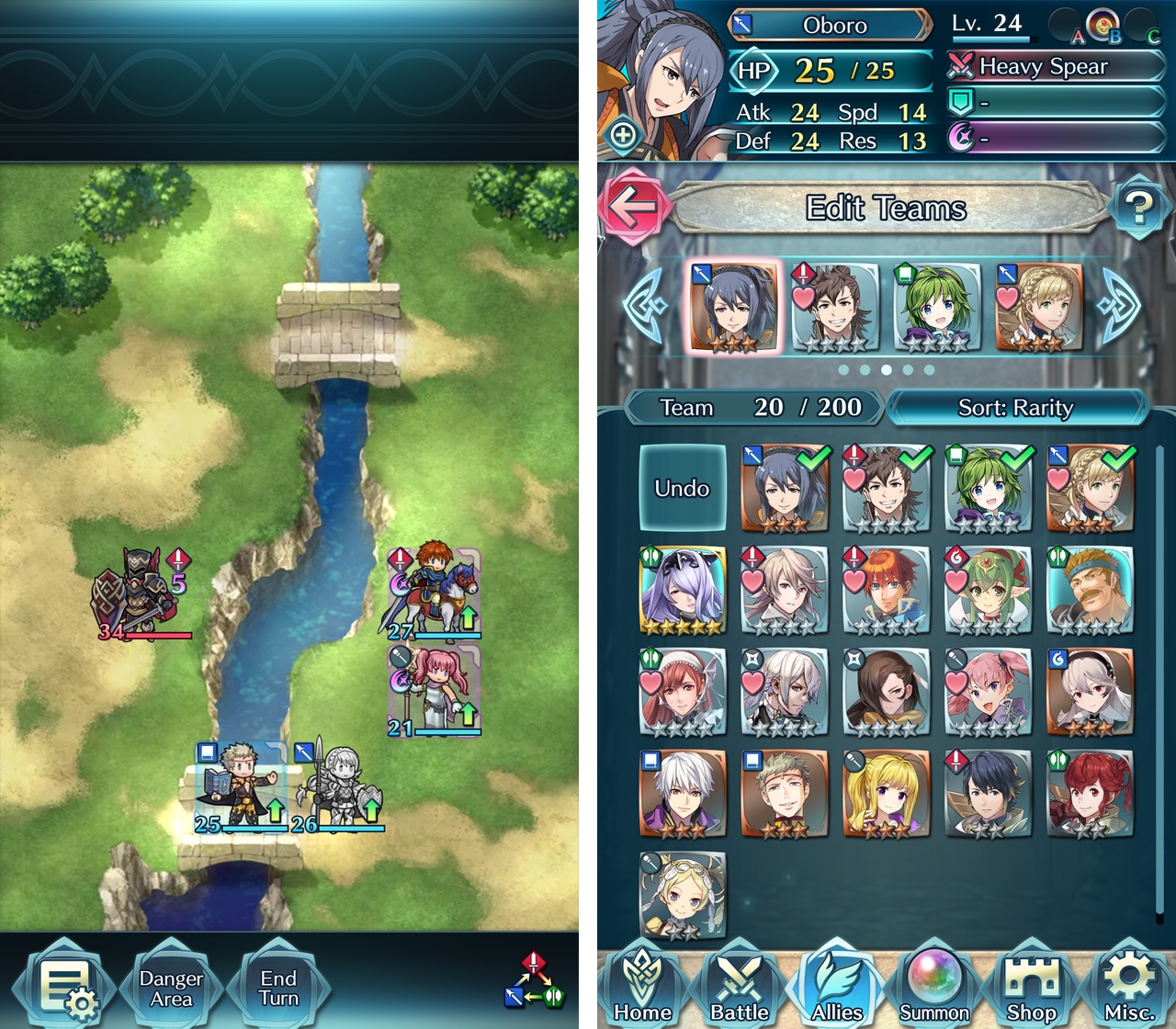 Since 1996, one of Fire Emblem’s most important mechanics has been its weapon triangle. Essentially, the weapon triangle is a rock-paper-scissors relationship between the game’s three primary melee weapons: swords beat axes, axes beat lances, lances beat swords.

In Fire Emblem Fates, the franchise’s most recent mainline entry, series developer Intelligent Systems reworked the triangle to include ranged weapons. The studio also colour coded the system to make it easier for players to remember the relationship between each weapon.

The colour coded triangle returns in Heroes with some additional tweaks that significantly change how battles play out. Bows, throwing knives and shurikens are now once again classified as colourless weapons. This means a character with one of those weapons will never have an advantage in battle, but they’ll also never be at a disadvantage either.

Lastly, characters can’t switch between weapons either inside or outside of combat.

If all of this sounds confusing, don’t worry. If you ever forget how a matchup should play out, there’s a handy graphic on the bottom right of the main battle screen to remind you.

The important takeaway is that, in simplifying the Fire Emblem formula, Intelligent Systems has made the weapon triangle one of the most important mechanics in Heroes.

In Fire Emblem Heroes, characters that have a weapon triangle advantage not only do more damage to their opponent, they also take less damage in return. This is the case in past Fire Emblem games, but the difference is more pronounced in Heroes. As characters level up, the damage discrepancy between mismatched opponents can become drastic, with some of the higher star heroes able to take out a disadvantaged opponent without taking any damage in return.

With player teams limited to four characters each, battles can be won or lost before your heroes ever step foot on the battlefield. A lot of Fire Emblem Heroes then becomes about team composition. This becomes especially apparent in the game’s player versus player arena mode where achieving a high score means putting together seven victories in a row.

When you first start playing Fire Emblem Heroes, it’s best to build a team that has coverage against all three weapon types. As you spend more time with the game and collect more characters, feel free to experiment. However, always keep the weapon triangle in mind when creating a new team. Likewise, your goal in each duel should be to have a weapon advantage over your foe. That’s not always possible, of course, but keep the weapon triangle in mind and even the most challenging battles will be a walk in the park.

Take advantage of all the free orbs Nintendo is giving away 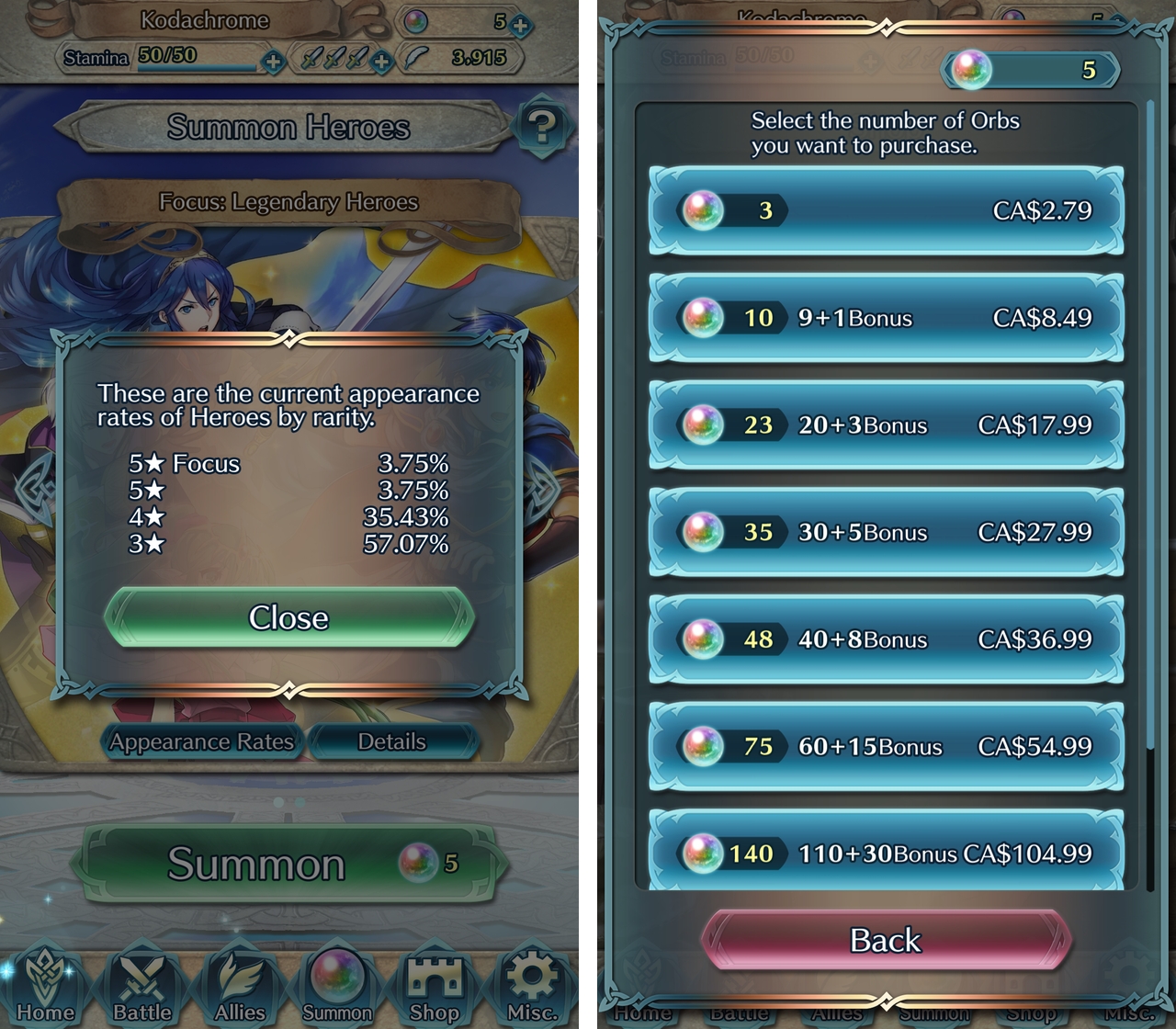 With 23 orbs priced $17.99 CAD and the base chance to pull a gold five-star hero at 3.75 percent, it doesn’t make much sense to spend your hard earned cash on Fire Emblem’s orbs.

Thankfully, there are several ways to earn Orbs without spending real world money.

The most straightforward way is to play the game. Each time you complete a story mission for the first time, the game awards you one orb. It’s possible to earn extra orbs from the same level by completing it again on a harder difficulty. With three different difficulty levels (normal, hard and lunatic), players can get up to three orbs for completing the same level multiple times.

On harder difficulties, the composition of enemies you fight on a particular level doesn’t change, but they are tougher. For instance, in the chapter two mission, Lovely Bloom, the highest level enemy on the game’s normal difficulty is level 4. Meanwhile, on hard and lunatic difficulties, she is level 14 and 24, respectively.

You can change the difficulty level of a mission by tapping ‘Battle,’ ‘Story Maps,’ and then tap on the tab to switch to your desired difficulty.

Then there are several ways to get free orbs without doing much at all. 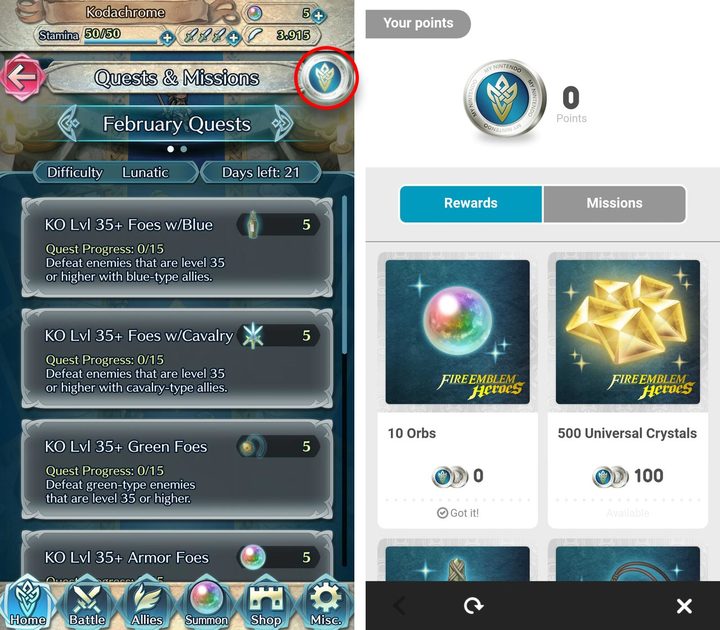 To start, Nintendo is giving each player two free orbs every day during the month of February. All you have to do is launch the game to get them. You’ll also want to log in at least once during the weekend to claim another two free orbs.

You can also get 10 free orbs by linking your game to a new or existing My Nintendo account. To link the game to a My Nintendo account, tap ‘Misc’ then ‘Account Management’ and ‘Link Account.’ Fire Emblem Heroes will then launch your smartphone’s browser. Follow the instructions provided on Nintendo’s website to create a new My Nintendo account or log into an existing one. Once you’ve linked your game to a My Nintendo Account, tap the “Home” button and then tap on the blue fountain located in the bottom right of your castle. Finally, tap on the blue My Nintendo button located next to the “Quests & Missions” heading to open the My Nintendo rewards section. Now all you need to do is tap the 10 orbs icon and visit the owl, located in the top right of your castle, to claim your 10 orbs.

Lastly, Nintendo is holding a launch celebration event where players can earn six orbs by completing two battles. To access these, tap ‘Battle,’ ‘Special Maps’ and then ‘Launch Celebration.’

Save up 20 orbs before summoning any heroes 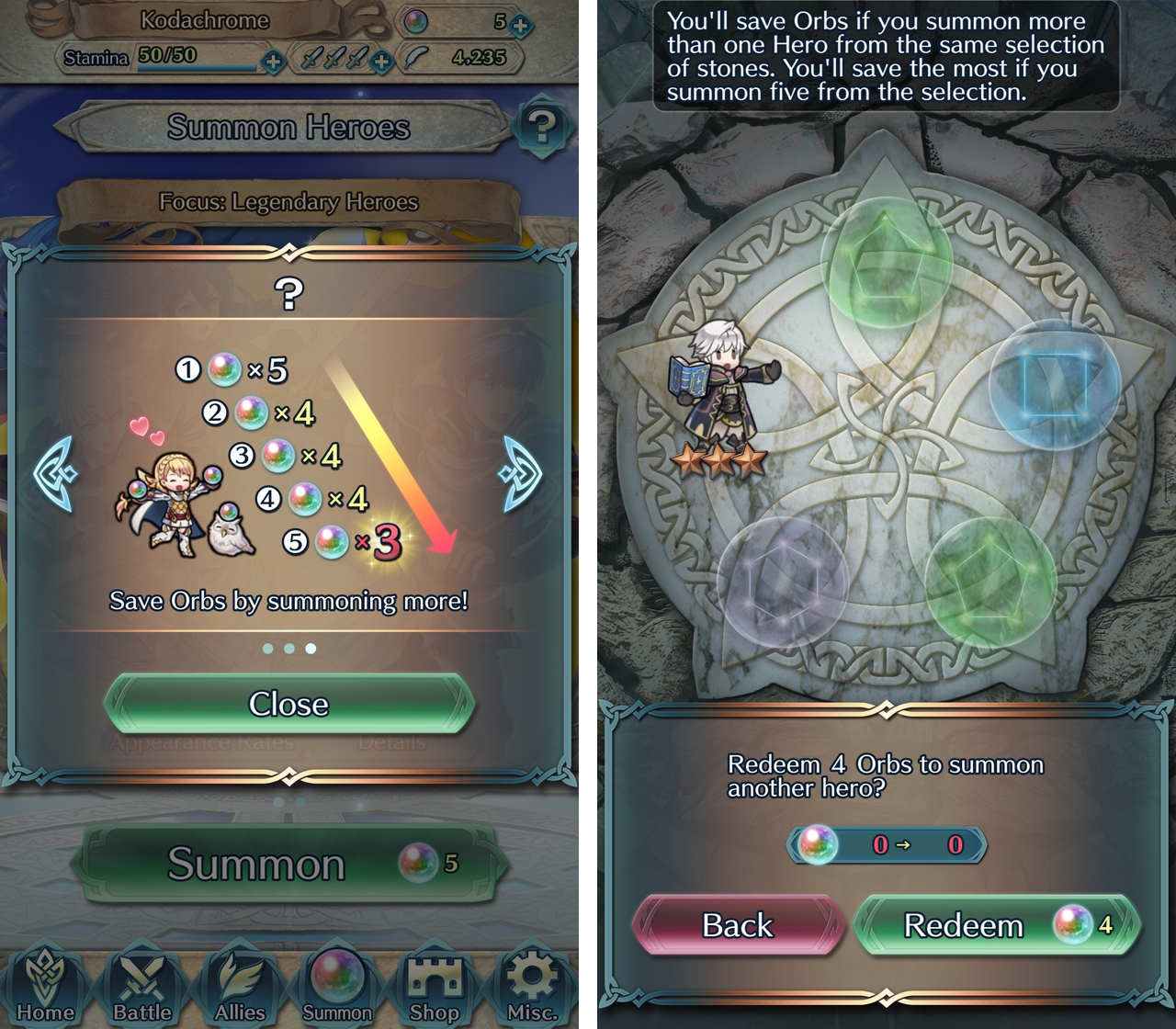 If you head over to the summoning screen, you’ll notice it costs five orbs to summon a hero.

You may find it tempting to summon a hero each time you get five orbs. However, it’s best to wait until you have 20 orbs before you test your luck. This is because there’s a bonus for chaining more than one summon in a row. In a summoning chain, the first hero costs fives orbs to summon, while the next three cost four orbs and the final one costs three. Therefore, summoning five heroes in one go costs 20 orbs as opposed to summoning one hero at a time which costs 25.

Another reason to chain multiple hero summons together is that the longer you go without drawing a gold five-star hero, the greater your chance to pull one during your next summon. This modifier resets after you’ve successfully drawn a gold hero.

That said, you should disregard this advice when you have a couple of strong heroes to anchor your team and need to fill out your roster to build a better-balanced team. With each summon being random, it doesn’t make much sense to draw another three to five red coloured heroes if you already have a strong sword arm like Lucina or Roy on your front line. Instead, if a draw is unfavourable, summon one hero and then cut your losses. Once you have 20 orbs again, do another summon.

When you’re first starting out orbs are plentiful. However, they quickly become scarce, so it’s best to be smart about how you use them right at the start. 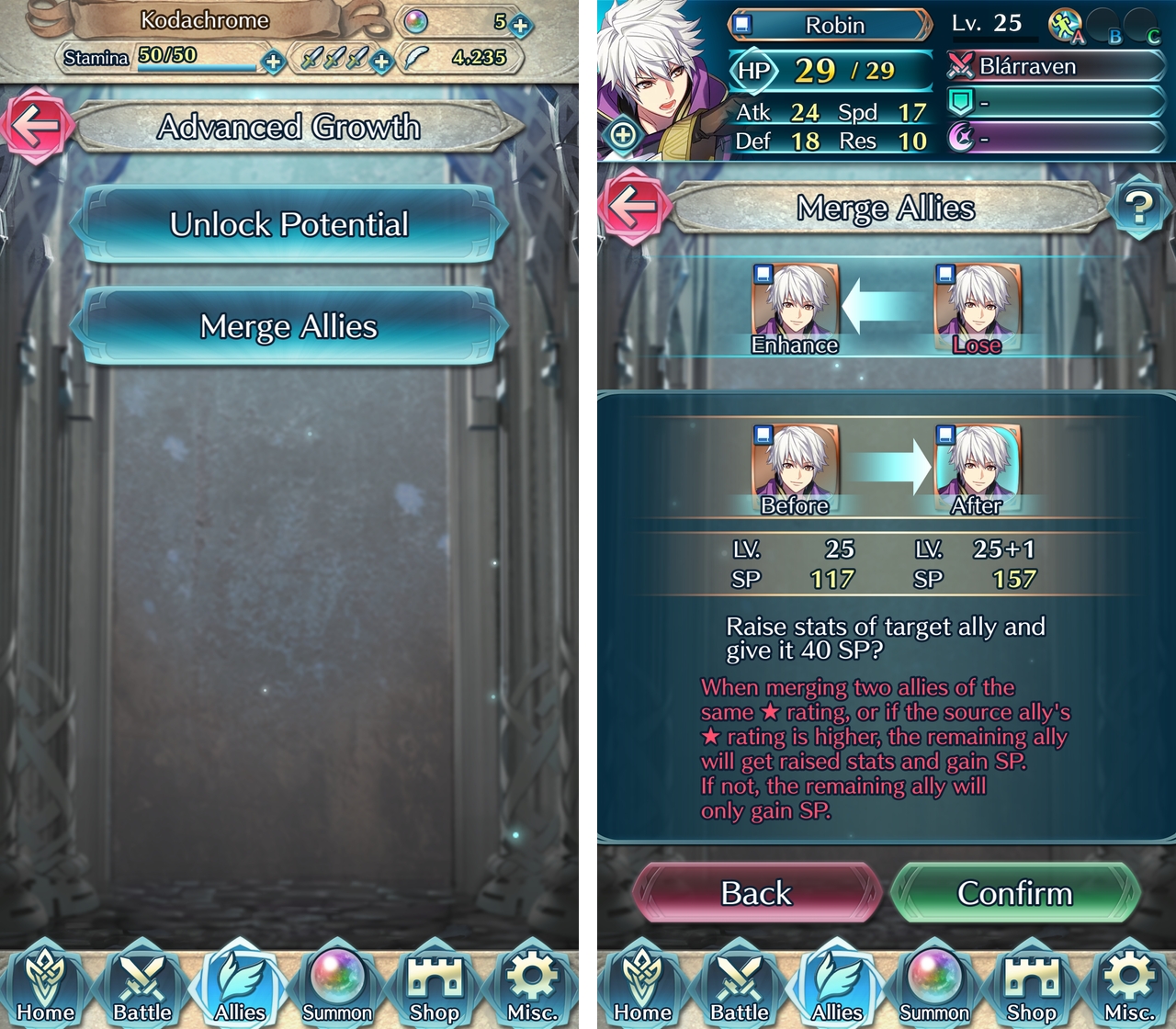 Each time you complete a summoning chain, you’ll end with heroes that, for any number of reasons, you won’t use. For instance, you may end up with an inferior version of a hero you already own.

These heroes aren’t as useless as you may think. You have two options when it comes to heroes you would rather the not use.

Your first option is to send them ‘home.’ This is done by navigating to the ‘Allies’ tab and tapping on the “Send Home” option. Each time you send a hero home, the game gives you a number of feathers depending on the hero’s star rating. Next to orbs, feathers are Fire Emblem Heroes’ most valuable resource. They allow players to upgrade a hero’s star rating. It costs 2,000 feathers to upgrade a three-star hero to a four-star one, and a massive 20,000 feathers to upgrade a four-star hero into a five star one. Besides sending heroes home, the only other way to earn feathers is to compete in the arena.

Your second option is ‘Merge Allies’.’ This is only possible when you have two duplicate heroes. In merging heroes, you sacrifice one hero to give another one a stat boost and additional SP points. SP points, if you haven’t learned yet, are the currency you use to upgrade a hero’s combat skills. Given

Given that heroes earn SP simply through levelling up, more often than not it’s most beneficial to send extra heroes packing to stock up on feathers.