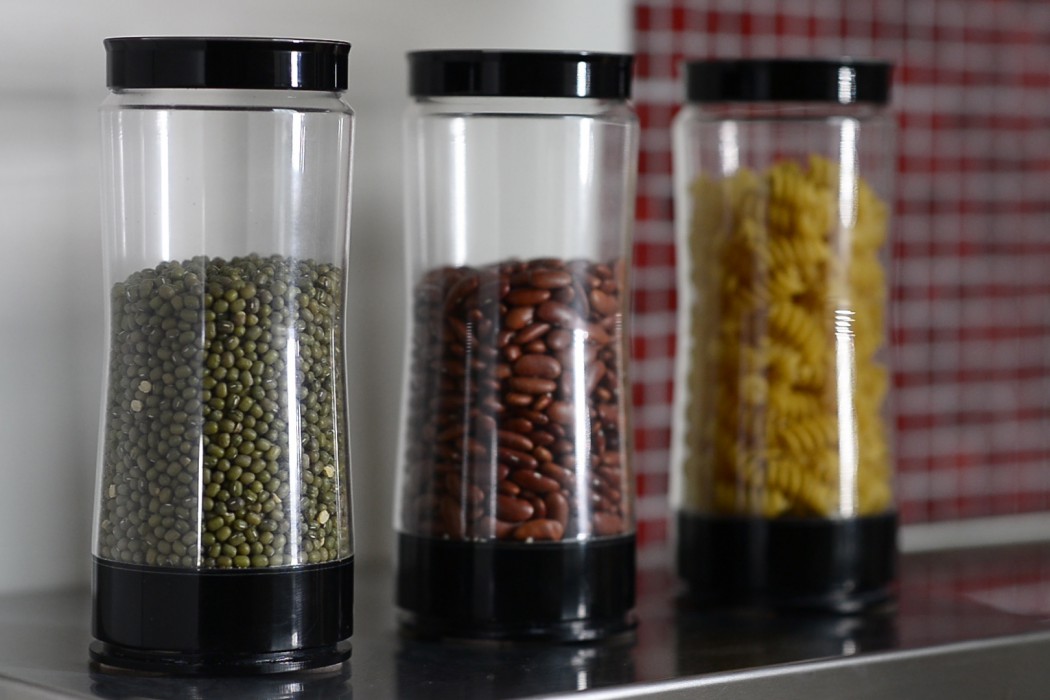 The Internet of Things (IoT) is real. BI estimates that by 2019 the IoT market will be more than double the size of the smartphone, PC, tablet, connected car, and wearable market combined. But if the dream of a connected world is going to happen, it means that nearly everything in it needs to be reinvented. For Toronto-based SKE Labs, makers of the world’s first smart jar, there is no better place to start than in the kitchen.

SKE (Smart Kitchen Ecosystem) Labs is on a mission to make your kitchen work for you rather than the other way around. Its first product is Neo, a sensor-equipped smart jar that keeps track of what’s inside it, which is communicated to a connected device via Bluetooth. This might sound trivial, but having a ‘conscious’ jar in the kitchen can go a long way to making your life easier — and healthier. As Neo can track the weight of its contents, measuring scoops of flour or sugar for a recipe, for example, is as easy as looking at the app. And Neo can tell you if you’ve eaten one too many cookies by showing you the nutritional contents of the food you’ve removed from the jar right down to the calories, carbohydrates, fat, and protein.

The smart jar can also assist in meal prep. When the food in the jar gets low, Neo will send an alert to add its contents to your grocery list. The app will suggest recipes based on what’s inside, and it will track ‘best before’ dates to avoid using spoiled food in a dish. On top of being smart, Neo also hits some necessities on the container side of things as well. The smart jar is dishwasher safe, has an airtight lid, and looks pretty good as jars go. We had the chance to catch up with CEO and founder, Madhuri Eunni, to get the inside, ahem, scoop on Neo and the kitchen of the future.

What is your vision for a smarter kitchen?

With all the technology around, it feels the kitchen is still stuck in time, there is so much we can innovate in this space. Future smart homes will have kitchens that are intelligent and intuitive. They enable personalized interaction and real-time insight in everything from food and fitness to grocery shopping.

“Future smart homes will have kitchens that are intelligent and intuitive.”

Netflix, for example, remembers everything you have watched in its history. There is nothing in the kitchen that remembers what you have been eating. A smart kitchen will have a fridge that knows who you are and what you like, kitchenware will keep track of intake and storage containers will alert you to freshness. Technology will help us eat better, waste less and make the right choices in simple, easy ways.

Why start with a jar?

Jars are the most commonly used items to store food in. It’s like this atomic unit in the kitchen that we use all the time. We talked to a number of people and lot of them said they store their high touch items in jars. So it was a good place to start introducing smartness without changing consumer behaviour. Neo smart jar works just like a regular jar except it has connectivity and sensors built into it which collect and send data to the cloud. You just have to tell it once what you put in – scan a barcode or type a name – and it does the rest. And also from an adoption point – jars are easy to change unlike large, expensive appliances.

Is the average person ready for this type of data?

Absolutely! There are so many fitness and wellness devices, apps – that’s irrefutable proof that people want information – about themselves, about their everyday activity and ways to stay motivated to reach their health goals. The quantified movement is unquestionably here to stay. And fitness is only half the story. The next step is a natural progression towards becoming more aware, being in the know about what we are eating, what’s in our kitchen and the choices we are making every day.

Where did the inspiration for Neo come from?

At first it was the nutrition aspect – as a vegetarian it gets really hard to know how balanced my diet is especially in terms of protein intake. I always add Chia, hemp, and protein powders to my morning breakfast but never knew whether what I am eating is enough or not. So, it seemed like if there was a jar that could track these things for me on a day-to-day basis that would be awesome.

“The quantified movement is unquestionably here to stay. And fitness is only half the story.”

After that, I just kept thinking a cloud-connected jar could do a ton of other things too. There were times when I’d buy things, shove in the pantry and forget about it until it was too late. Many of my friends kept saying how easy it would be to plan for dinner if there was an app that would let us what we can make every night. Every time I heard something like this a bell would go off and I kept coming back to this idea of a smart jar.

What’s next for SKE Labs?

Right now we are all working very hard on our crowdfunding campaign which has just launched on Indiegogo. We already have people asking us for more sizes, shapes, colors. And it’s great because it shows people are already thinking of different ways to use Neo. This is the first step for us. Kitchen is a multi-layered and a highly complex space. So we’ll be innovating and reimagining things in the kitchen one by one. There is so much we’d like to do from making smarter kitchenware to building a robust ecosystem around retail, content, data, nutrition and fitness. It’s going to really exciting.