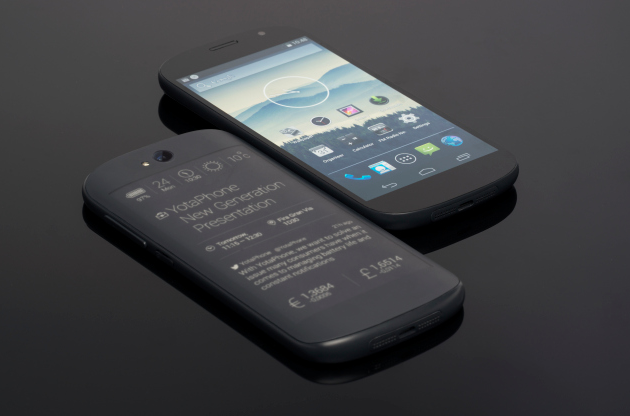 We got our first peek at the second generation YotaPhone at Mobile World Congress back in February, and the company promised availability towards the end of this year. When Yota scheduled an event for this week, we were hoping for some news on a Canadian release date. Unfortunately, it looks like the device won’t actually see Canadian availability until 2015.

Yota confirmed that the YotaPhone 2 would hit 20 European countries before the end of the month. Asia will get the phone early in 2015 with Canada and Latin America to follow later in the year.

The YotaPhone 2 has a 5-inch AMOLED display and is powered by a quad-core Snapdragon 800 clocked to 2.2GHz. It’s got 2GB of RAM, 32GB of storage, an 8MP rear-facing camera, a 2MP sensor up front. It looks a lot like a Nexus S.

Of course, the standout feature is the touch-sensitive eink display on the back. This can be set to display notifications, tweets, RSS feeds, or updates from your social networks. The last generation YotaPhone had a rear display but it wasn’t touch-sensitive. Instead it had a touch-sensitive panel underneath the display. You can also switch off the primary display to save on battery.

Other changes include the placement of the camera, which has been moved from the old location at the bottom left corner of the device’s rear. It now sits top-centre on the back of the phone. This means no more blocking the camera with your hand when trying to take a photo.

The YotaPhone 2 will run KitKat out of the box. No word on when Lollipop will arrive but the YotaPhone 2 is more or less stock Android, so we hope an Android 5.0 update isn’t too far off.

The device is priced at 33,000 Rubles. We won’t have anything on Canadian pricing until closer to the launch but the Russian price equates to just shy of $700.

The YotaPhone 2 is no longer coming to Canada