It was only a couple weeks ago that Apple declared that “74% of devices are using iOS 7,” a stat generated based on users visiting the App Store.

Now, a  14 days later, Apple says “76% of devices are using iOS 7.” Looks like those on iOS 6 finally decided to upgrade to iOS 7 as Apple notes that users now represent 20%, dropping 2% in the last week. Or it could simply mean that Apple has sold more iOS 7 devices. A minor 4% of iOS users are still booting up iOS 5 or earlier.

Unfortunately, there’s no indication on the number of devices that have actually visited the App Store, only a percentage. However, an increase of 2% in a couple weeks is certainly good progress. 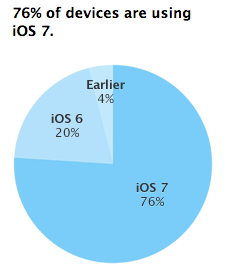