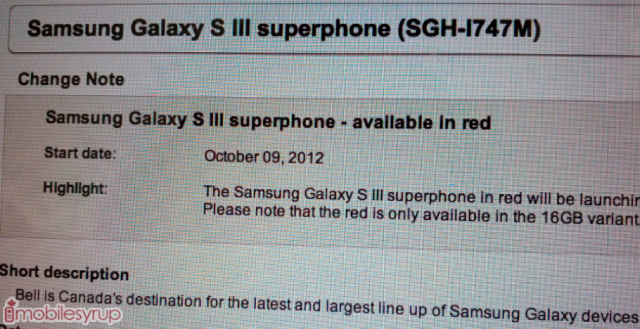 Bored with the Pebble Blue or Marble White Samsung Galaxy S III? Not interested in the $3,400 “Swarovski Edition” GS III? How about a Red version? Today, we bring you news that a new colour of Galaxy S III is coming to Canadian soil, courtesy of Bell. According to an internal doc we received it shows Bell will be launching a red model on October 9th. In addition, Bell notes that the red version will “only available in the 16GB variant.”

Samsung recently announced that they passed over the 20 million GS III sales mark and Bell was the first of many Canadian carriers that release the Android back in June. Check out our full review of the GS III here.