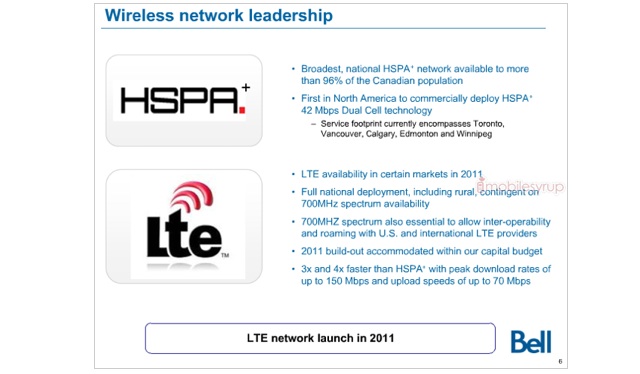 The race for which carrier will be first to deploy LTE (Long term Evolution Technology) in Canada is getting heated. In Bell’s Q1 2011 results this morning they declared they’ll be launching LTE this year:

“Building on its mobile broadband network leadership, Bell today also announced it would deploy next-generation LTE wireless in certain Canadian markets in 2011, with full national deployment contingent on the availability of new 700 MHz spectrum essential to interoperability and roaming with U.S. and international LTE providers.”

The Big 3 carriers (Rogers, Bell and TELUS) have all stated their LTE networks will be available either late 2011 or early 2012, with the capability of reaching download speeds of up to 150 Mbps and upload speeds of up to 70 Mbps. Rogers set up the website “IwantmyLTE.ca” and has plans to launch LTE in later this year in Toronto, Montreal, Vancouver and Ottawa. In an internal doc we received last week Bell stated that “Bell has completed 4G LTE trials and we are currently deploying LTE as well. Our competitors will not get in front of Bell’s network leadership.”

There was no word on which cities Bell will be letting LTE loose in but it’ll probably be similar with Toronto, Montreal, Vancouver and Ottawa.