Quote: “Bell has completed 4G LTE trials and we are currently deploying LTE as well” 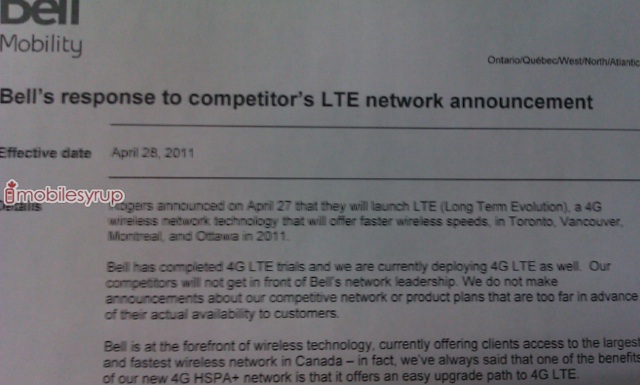 Earlier this week Rogers came out with some blistering news that they’ll go forth and launch their LTE (Long Term Evolution) network this year in Toronto, Montreal, Vancouver and Ottawa, then in 2012 add another 25 markets. Other carriers such as TELUS, Bell and WIND are all currently testing LTE and planning to deploy sometime in early 2012.

The last news we heard about Bell’s LTE plans was back in October 2010 when a spokesperson said that “LTE won’t be happening by any carrier until at least 2012″, but that Bell was actively doing trials at the Ericsson Ottawa Research & Design facility.

With Rogers announcing LTE is coming this year it seems Bell might be actually be the first Canadian carrier to deploy it. According to the internal doc we received it states that “Bell has completed 4G LTE trials and we are currently deploying LTE as well. Our competitors will not get in front of Bell’s network leadership. We do not make announcements about our competitive network or product plans that are too far in advance of their actual availability to customers.”

So there you have it… the competitive LTE race is officially in high gear.
(Thanks tipster!)