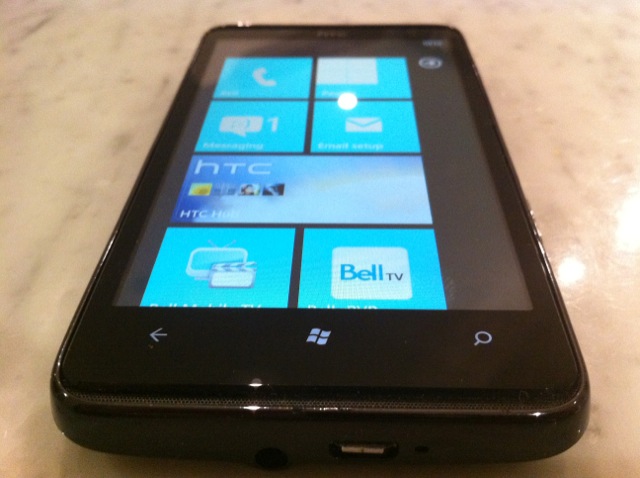 A few days ago, this was going to be a very different review. Before February 11th, Microsoft seemed to be pouring money into an endless vat of untapped potential. But on February 11th, the software giant partnered with the largest mobile hardware manufacturer in the world, and suddenly the entire game seems different. Perhaps fleeting, but I sense in the industry a tempered optimism towards the future of the Windows Phone platform.

The HTC HD7 is, however, a product of the pre-Nokia/Microsoft deal, and is the newest Windows Phone 7 device released in Canada. Previously, Bell’s only WP7 phone was the LG Optimus Quantum, a diminutive, hefty QWERTY slider. Compared to it, the 4.3” HD7 is equally massive and elegant, an austere symmetrical piece of glass hedged by two identical speaker grills.

But in this crowded smartphone marketplace, does the HD7 have a place, not only against other platforms, but against the myriad Windows Phones launched in October? Read on to find out.

A Brief History:
Windows Phone 7 was released in late 2010 after much anticipation. A stark re-imagining of the mobile operating system, and a departure from the Windows Mobile that had become obsolete since the emergence of capacitive touchscreen mobile OS’s like iOS and Android, WP7 is all about simplicity. Microsoft realized that they needed to be a player in the burgeoning, and highly profitable, smartphone market, and HTC, already one of its premiere vendors, producing some of the highest quality handsets, delved right into the WP7 market.

Now, unlike Windows Mobile, manufacturers don’t have a lot of leeway when it comes to producing WP7 phones. All devices must have some seriously high-end specs to meet Microsoft’s vendor criteria, and that includes a dedicated camera button and the same three hardware buttons: Back, Windows, Search. The HD7 adheres quite closely to the requirements, but adorns its body with some additional accoutrements, to separate it from the pack. 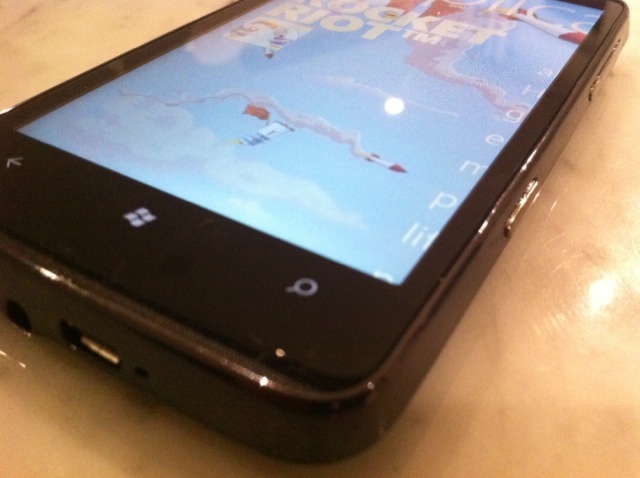 The Phone:
I was already familiar with the HD7, it being a T-Mobile launch device in October, 2010. I even considered importing one to unlock and use on Wind or Mobilicity, since the networks are compatible. But this HD7 has an 850/1900Mhz radio, and is therefore compatible with Bell (or, unlocked, Rogers and Telus) and is therefore going to be much more attractive to the average Canadian.

Upon first viewing the device, you’re greeted with screen. At 4.3”, the 480×800 pixel screen will likely eat your phone for supper. A full ¼ larger than the iPhone, the HD7 is on the precipice of being too big, but its slight width saves it from the term “bulky.” In fact, the form factor is stunning. Taking as much from its predecessor, the HD2, as it does from the current crop of HTC Android devices, its front is made of premium plastic and its back of brushed anodized metal. The slight charcoal grey-coloured matte texture of the removable battery cover keeps it from slipping, and the glossy plastic bezel, though a fingerprint magnet, is nicely accented with the metal.

Buttons are kept silver and simple: power on top (easy to press, thank goodness. LG, looking at you); volume rocker and camera button on the right side; headphone jack, microphone, microUSB on the bottom; left side naked. My review unit has a defective volume rocker that audibly rattled whenever I moved the phone, which was quite frustrating.

The back cover is removable, and thankfully, there’s only one piece to remove (see Desire HD). The camera protrudes only a millimetre or so, and one of the nicer design choices HTC made was to attach the kickstand to camera mechanism. It works very well, and allows for native media viewing without the need for a stand. At 4.3”, the device wouldn’t be one’s first choice to watch a movie, but with two forward-facing speakers (and one rear), as well as access to Bell’s Mobile TV offerings, the results are pretty compelling. More on Bell Mobile TV later.

HTC has clearly taken care to ensure the HD7 feels premium, and you’re not going to find a better-built WP7 device on the market. The phone’s greatest weakness, however, is its screen. The market for 4.3” screens is growing, and as a result, production is ramping up. HTC’s choice to skimp on the type of screen technology, however, is disappointing. The traditional TFT LCD display, while displaying colours fairly accurately, has poor black levels, resulting in grey, muted backgrounds. Considering much of the Windows Phone interface takes place with white text on black, the result effect is one of reluctant distaste. I say reluctant because whites are bright and smooth, and though colours are somewhat mild, like there is sunlight constantly shining on the screen, it makes up for it by reproducing them accurately.

For day-to-day use, the screen is not going to be a deal-breaker, though if you’ve ever seen the Samsung Focus with its 4” Super AMOLED display, you’ll feel you are settling with the HD7. 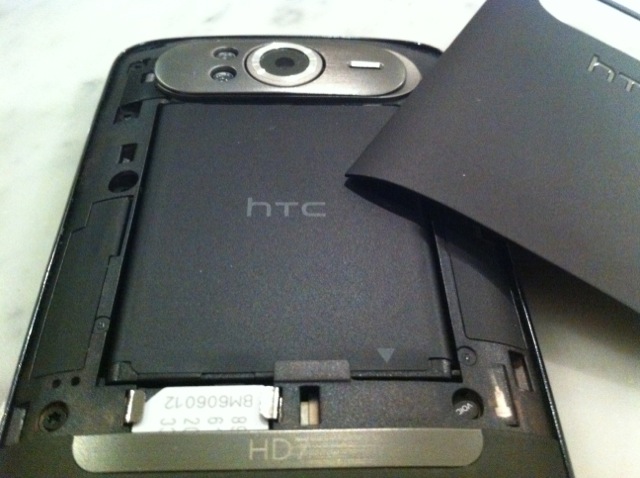 Battery Life:
For a phone with such a large screen, the battery life on the HD7 is quite good. It shares the 1230mAh battery with its cousin, the Desire HD, and I’ve noticed, perhaps because of WP7’s inability to multitask, the battery life of Microsoft’s OS is usually better than the equivalent Android phone. When I say that the battery life is good, I mean that it’s good for a 4.3” device with a 1230mAh battery. The device lasted all day, with moderate use; I’d say I got a good 8-9 hours on it before I saw it hit the red, and that was with constant SMS, Internet, Twitter and RSS usage. 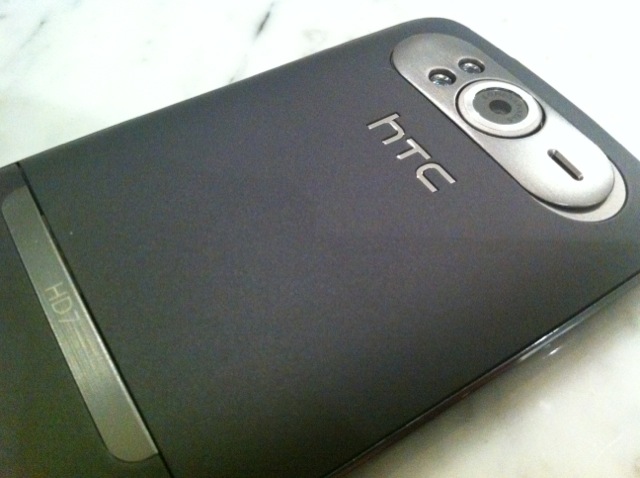 Camera:
The camera on the HD7 is, like on most HTC devices, awesome. Its 5MP sensor and dual LED flash derive excellent indoor shots, and the sensor is sensitive enough to catch good detail in daytime shots with limited noise. Unlike LG’s infamous overexposing flashes, the HD7’s dual flashes are not overpowering at short distances.

The 720p HD video is, as usual, not going to replace your point-and-shoot, but it does the job, and the microphone is surprisingly sensitive, picking up a good amount of accurate speech from its single microphone.

I have commend Microsoft for putting a lot of thought into their camera software. Not only does the dedicated camera button wake up the device when long pressed, allowing for instant shots in a pinch, but, like iOS, allows for the camera to refocus and take multiple pictures almost instantly. The software is intuitive, allowing for one-touch flash, exposure and resolution settings. Presets such as Portrait, Landscape, Sports, Beach, Macro mode give the illusion of control, but they’re merely software tweaks and should probably be left alone.

Photos can be instantly uploaded to your Facebook or SkyDrive account, and the device can be set to upload all photos, with either public or private security attached to them. Sharing is also easy, allowing you to send a picture to any configured email account. A photo can also be used as a home screen wallpaper, though that is the only configurable screen for pictures.

Call Quality:
Call quality on the HD7 is excellent. Even in places where I got only one or two bars I noticed voices were clear and I didn’t have a single dropped call. Speaker is loud and distortion-free. The phone app, too, is very easy to use, with big usable number buttons and one-press access to voicemail and call history.

Summary:
The HTC HD7 from Bell is currently Canada’s best WP7 phone. If you can get over the larger form factor and the slightly muddled screen, you’ll find a beautifully designed device manufactured with high quality plastic and aluminum. The kickstand, along with Bell’s Mobile TV offering, is the first comprehensive mobile streaming offering in Canada, and the 1Ghz processor allows the 8000+ apps to run smoothly on the 4.3” screen. If you’re looking for a WP7 phone, this is the one to get.

Cons:
– Screen contrast/black levels are poor
– Volume rocker rattled on my unit/poor quality control
– 1230mAh battery on a 4.3” display a bad decision
– Several WP7 features are not yet fully baked
– Many concerns will be addressed in late-2011 update

Update: Microsoft has confirmed that the WP7 platform will receive a huge update in late 2011 allowing for limited multitasking, fuller Twitter integration, IE9 with hardware acceleration and deeper integration with Xbox Kinect and Live. For now, many of the concerns I have with WP7 still stand, and if you can handle the 8-month or so wait until the update, the HD7 and the platform may be just right for you.