Bell dramatically increases the prices of MANY devices 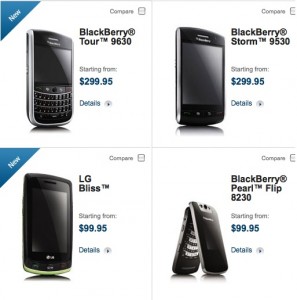 Maybe the new HSPA network is coming soon than we think! Perhaps they want customers or potential customers to flock to the Palm Pre, but Bell has dramatically increased the prices of some (almost all) of their devices.

The fun continues for the BlackBerry Tour 9630. Even though Bell is putting in strong efforts to sell against Rogers BlackBerry 890, they have increased the price to $299.95 on a 3-year contract. This was originally launched at $249.95 way back in the middle of July.

Ouch. You know things are up when the entry level Samsung m530 gets a price jump. This was just released in Black on August 28th for $19.95 on a 3-year contract, but only after a couple weeks you can now get this for a stellar $39.95.