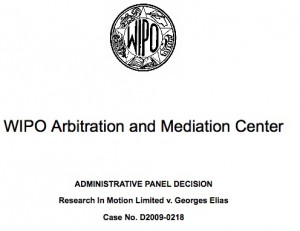 Remember back on April 30th when RIM announced they have officially launched their internal blog called “InsideBlackBerry.com”. Well there is reasons why it was delayed and it all stems back to Georges Elias. Don’t know who is his? Well, he owned over 111 domain names using the word “BlackBerry” or “Berry”, InsideBlackBerry.com was one of these domains.

RIM wanted it so bad that they filed a suit with the WIPO (World Intellectual Property Organization) on March 23, 2009 against him stating that the site infringe on their trademark names “BlackBerry” or “Berry”.

I guess RIM lawyers went undercover before the filing and contacted Elias who wanted to sell the InsideBlackBerry domain for a cool $80,000. According to the report:

Fast forward to April 27, 2009, a decision was reached by the WIPO that 101 domains “be transferred to the Complainant” and Elias was only stuck with ten. 3 days later RIM officially announced their corporate blog with the catchy name called “InsideBlackBerry”.

Read the full complaint from the WIPO here
Source: BerryReview