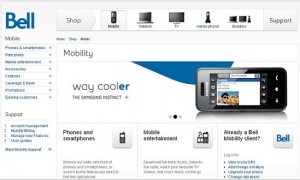 Bell has certainly had an eventful past couple weeks. They hired new President and CEO George Cope who layed out a 90-day plan to restructure and rebuild. Let go of 2,500 management positions – including beloved Frank & Gordon. Now, the new brand has been launched with a simple and clean looking logo and website.

The site itself is easier to navigate through and very intuitive. The images are clean, some links still lead to the old site with the old logos and info but regardless… it is a sexier site. Bring Bell up to the web 2.0 era. You might have seen a bunch a teaser advertising over the past couple weeks that only indicated a “er”… well this new strategy was created by agency Zulu Alpha Kilo,Leo Burnett, Ig2, and Cossette Communication Group with the goal to create “Bell-ements”. The tagline is “Today just got Better”.

George Cope says: “The new Bell brand underlines that we are moving forward as a company and as a service provider, with new services, a new strategy and a new goal. It’s a straightforward and customer-focused brand that directly supports the Bell team’s goal: To be recognized by customers as Canada’s leading communications company.”

If you remember when they originally announced the phone it was going to be $149.95 on a three-year contract, $249.95 on a two-year contract or $399.95 on a one-year contract and no contract it is $449.95, but with the success Sprint had in the Unites States the price was increased.

Check out the new site and the “Apple Eater” Samsung Instinct here.