The Mexico backdrop is strengthened with dynamic weather, interesting biomes, and no shortage of activities 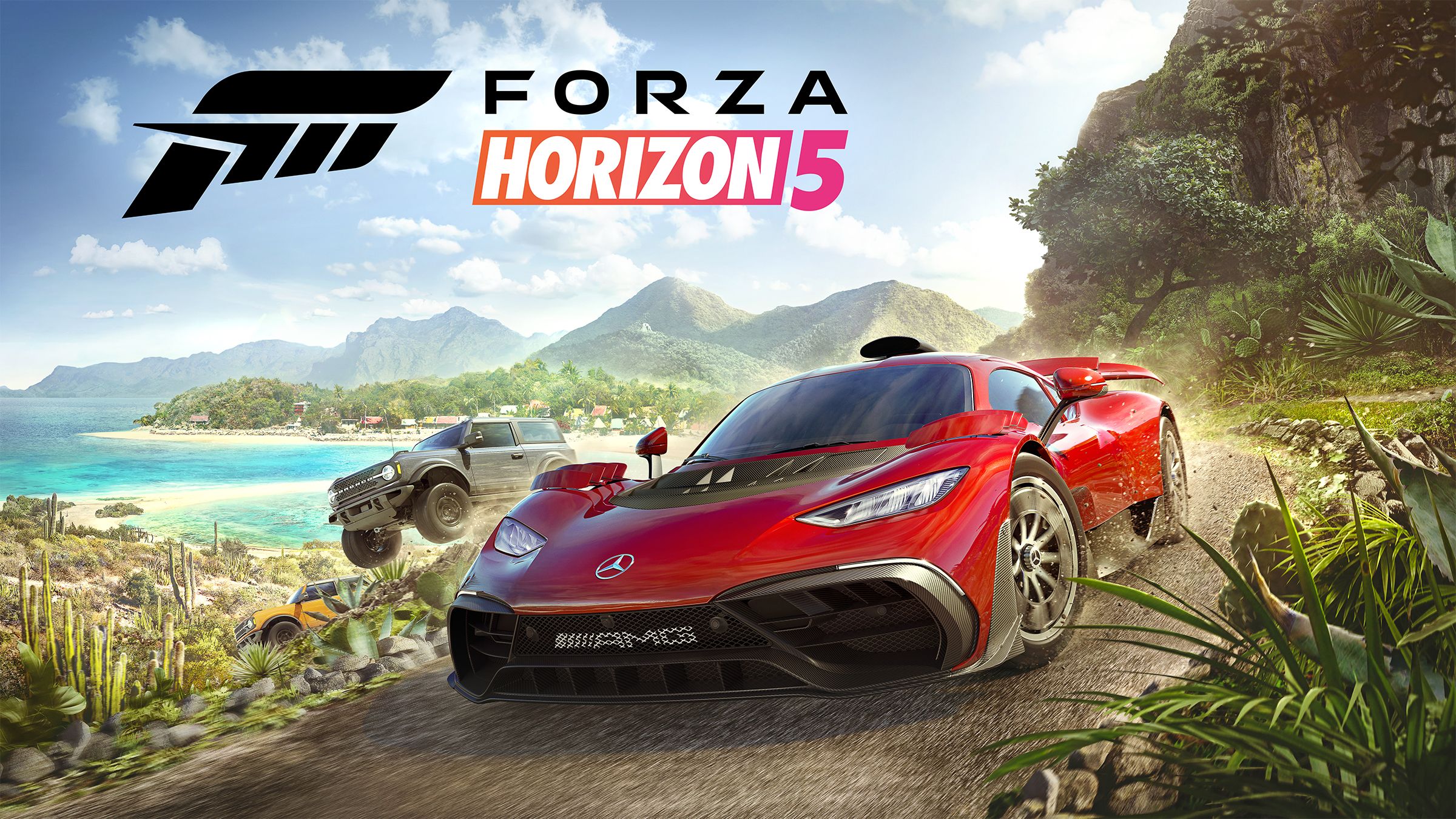 Barrelling down a barren path in Forza Horizon 5, I approach a sandstorm on the skyline. Though ominous, the winds picking up grains of sand compel me to floor the gas and head straight on through. As the adrenaline kicks in, I’m reminded of why Playground Games’ open-world racing series is so special to me.

Forza Horizon has been Microsoft’s long-running racing franchise alongside sim-focused sister series Forza Motorsport. Across console generations, we’ve seen the Forza Horizon series evolve and become more ambitious with each outing. Forza Horizon 5 provides the familiar moments I crave from the series while elevating itself by utilizing all that the Xbox Series X offers. 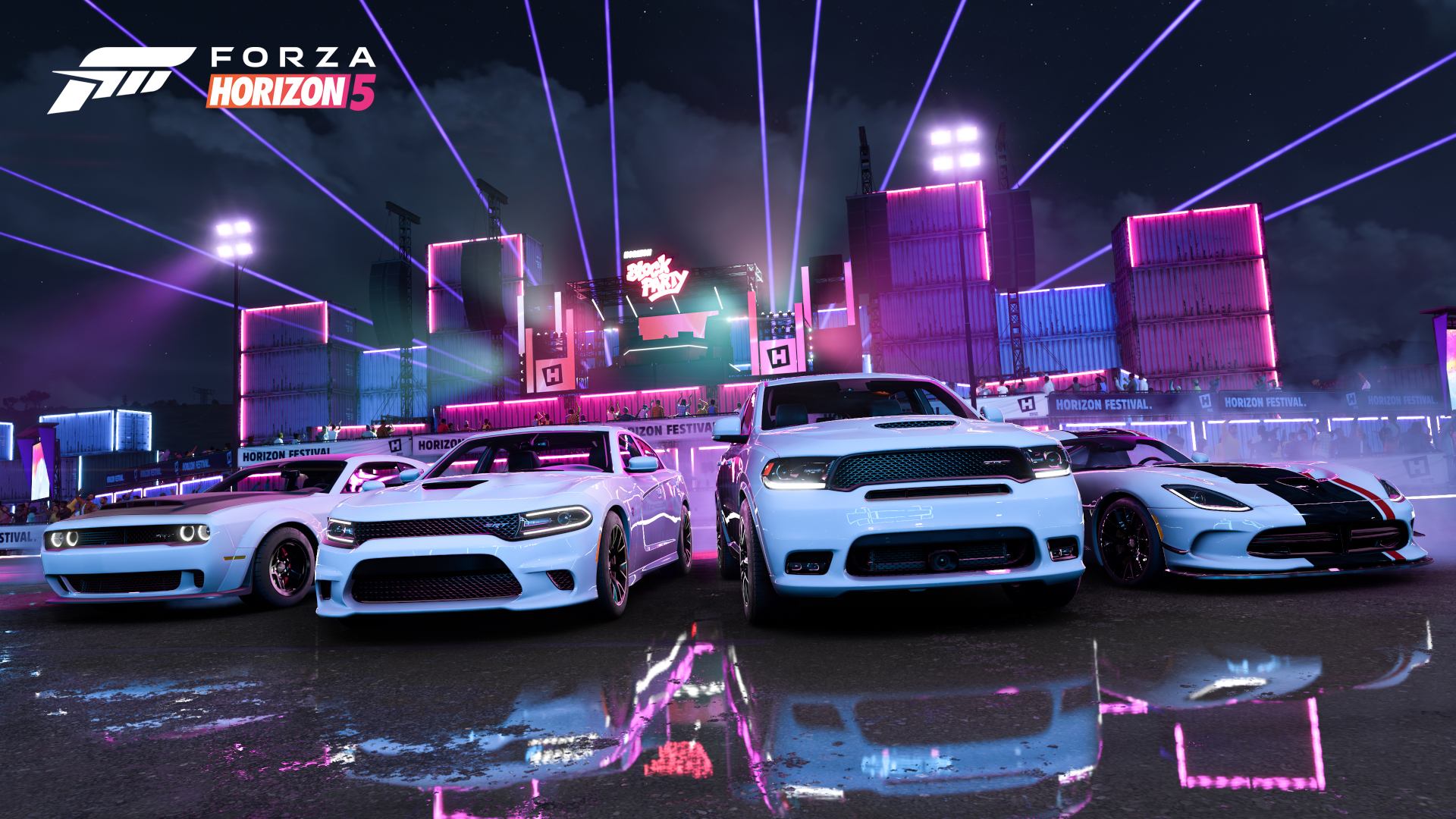 Playground Games spared no expense in showing how ambitious the team is this time around. Set in the heart of Mexico, Forza Horizon 5 offers the largest, most interesting and diverse backdrop we’ve seen in the series. While the moment-to-moment stylings of the game are par for the course, Forza Horizon 5 is, bar-none, one of the most visually robust games from Xbox Game Studios.

Forza Horizon 5 opens up like any other contemporary racing game. As the Horizon Festival is kicking off in Mexico, I was taken in to help expand the festival, drum up excitement, and race to my heart’s content. What propels you to hit the roads and reach for the stars is charted territory. However, Playground Games has invested time in creating more compelling side stories that I wasn’t expecting. Throughout my time with Forza Horizon 5, I found myself taking on Horizon Stories. These small-self contained narrative threads still revolve around time or skill trials and races, yet there are interesting stories unfolding because of them. They’re not too deep but they do add more texture to the typical ‘race for the sake of racing’ structure we’re so used to.

As you reach new levels, you can then unlock new activities. It isn’t before long that the map is covered in an overwhelming amount of things to do.

Now, that’s not to say that Forza Horizon 5 doesn’t include the usual trappings you’ve come to expect from the series. The game features standard events like Road Races, Street Races, PR Stunts, etc. As you begin completing each activity, you’ll start to unlock Accolades that will go towards boosting your advancement in the Horizon Adventure. As you reach new levels, you can then unlock new activities. It isn’t before long that the map is covered in an overwhelming amount of icons. Adding to that are XP Boards and Fast Travel Boards to find throughout the open world. 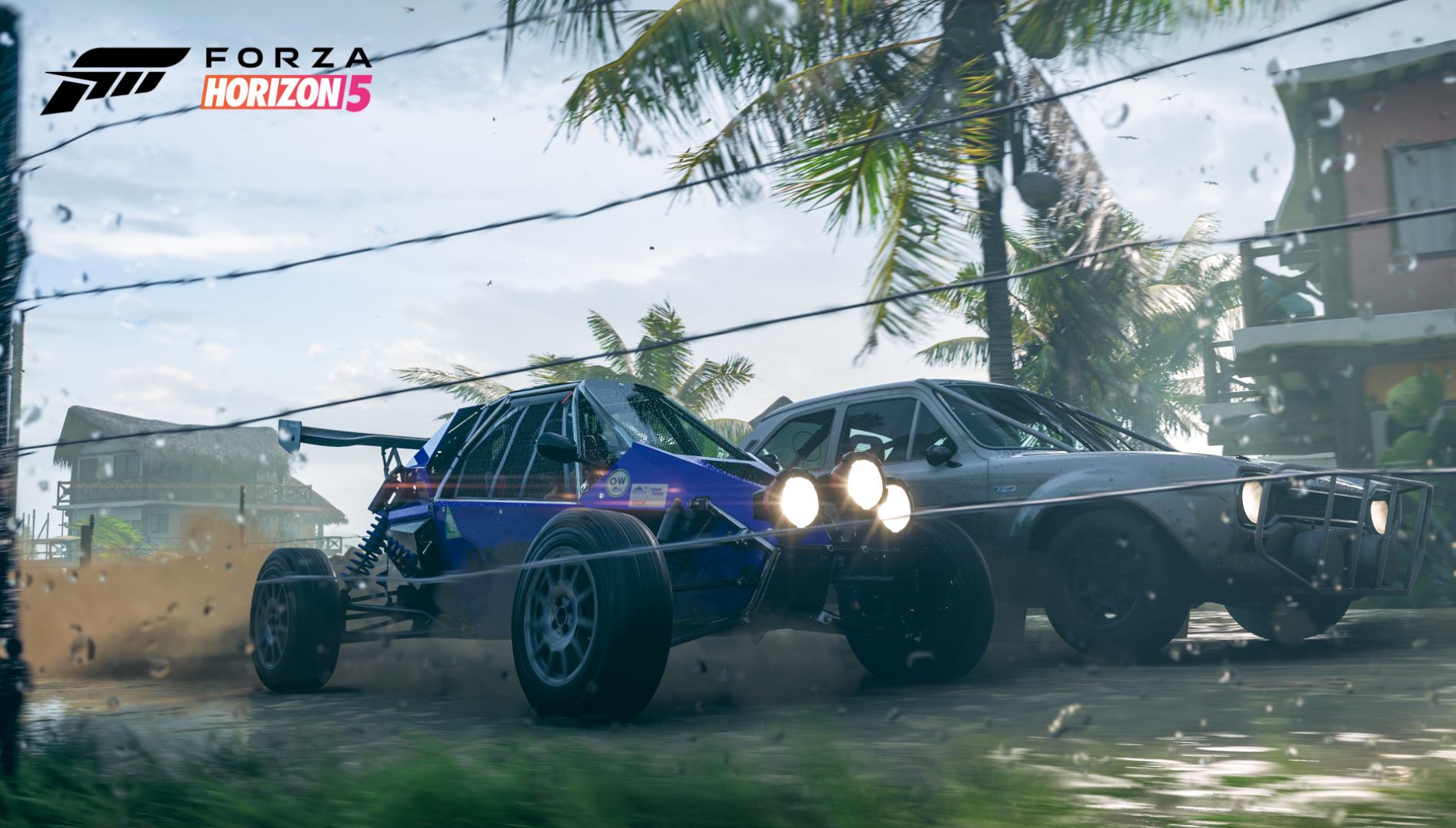 There’s no shortage of events to complete, especially when striving for the three-star challenges, for more Accolades. In turn, you’ll eventually unlock Expeditions and Showcase Events, offer deeper experiences outside of hitting a fast racing time or total skill count. Expeditions will take you through optimized courses made to showcase all Forza Horizon 5 has to offer. Showcase Events, on the other hand, are long-drawn-out races that test your mettle against other racers and Drivatars pulled off your Friends list.

For me, Mexico is such a rich and diverse location to experience while racing. Spread across 11 unique biomes, I found myself speeding through sandy deserts, lush forests, and snowy mountain tops. The map is so dynamic that as I found myself racing from one area to the next, the transition between biomes is seamless. On top of that, the game incorporates a dynamic weather system. Throughout the game, you’ll encounter sandstorms, rainstorms, and more. They add tension and sheer spectacle to the screen when driving. I never found that they appear too frequently, which helped keep these events from becoming saturated. I almost feel a bit giddy every time I see one on the horizon and hope that feeling never goes away. 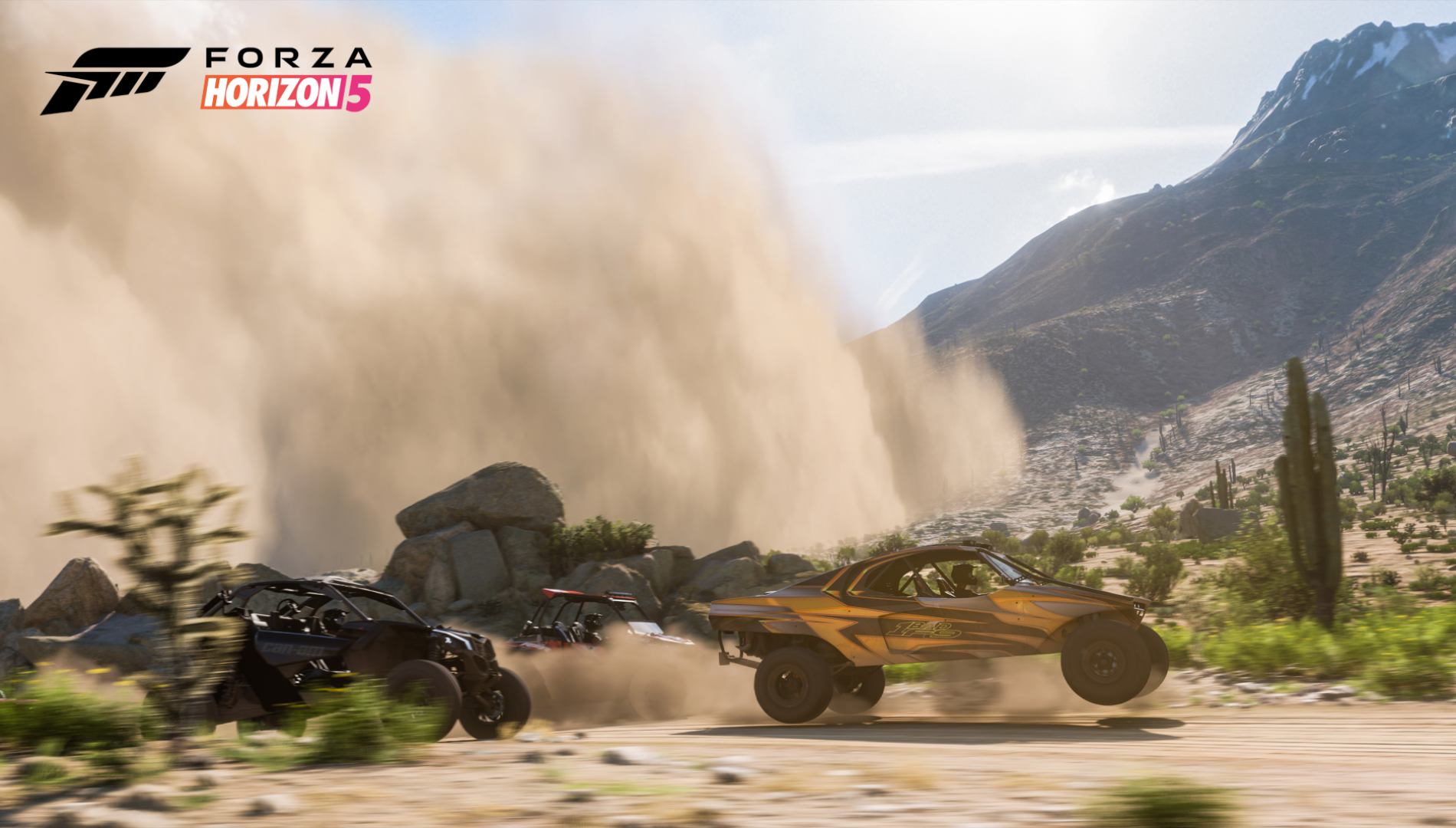 Playground Games has shown prowess in open-world environment building. Thankfully the game offers a Photo Mode. I found myself hard-pressed from progressing too long without taking a photo of my vehicle in the wide array of environments.

“The lighting and reflections border on realism when bouncing off the hood of a beautiful car like the Mercedes-AMG ONE.”

When playing on the Xbox Series X, I was consistently surprised by how well the lighting systems and particle effects added to the experience. Forza Horizon 5 offers both a Graphics Mode and Performance Mode. Although I typically opted for 60FPS performance, I was compelled to bounce between during my playtime. The lighting and reflections border on realism when bouncing off the hood of a beautiful car like the Mercedes-AMG ONE.

Character models do take a back seat. However, it’s for good reason. All 500+ cars in the game look immaculate. The hyper-focused realism put into the way the breadth of cars looks is unparalleled. Notable vehicles included in the catalogue are the 2021 Ford Bronco Badlands, 2020 Corvette Stingray C8, Porsche 911 Desert Flyer. Of course, what’s Forza Horizon without a little Halo love? Yes, even the UNSC Warthog is in the mix.

Although the Forza Horizon series has continued to evolve and become grander in its visuals, aspects of the game I wish grew along with it. Most notably, the game features an overbeating UI and menu system. Fortunately, I’ve played a number of Horizon games so I knew what to look for a where to find it. For newcomers, the menus could seem clunky. Having to fast travel from my location to the Forza Garage in order to buy a car is restrictive. The same goes for customizing my avatar. It’s an inconvenience to be ripped from where I am on the map in order to change the appearance of my driver. Small quality of life improvements could have been made to streamline to UI experience for players. 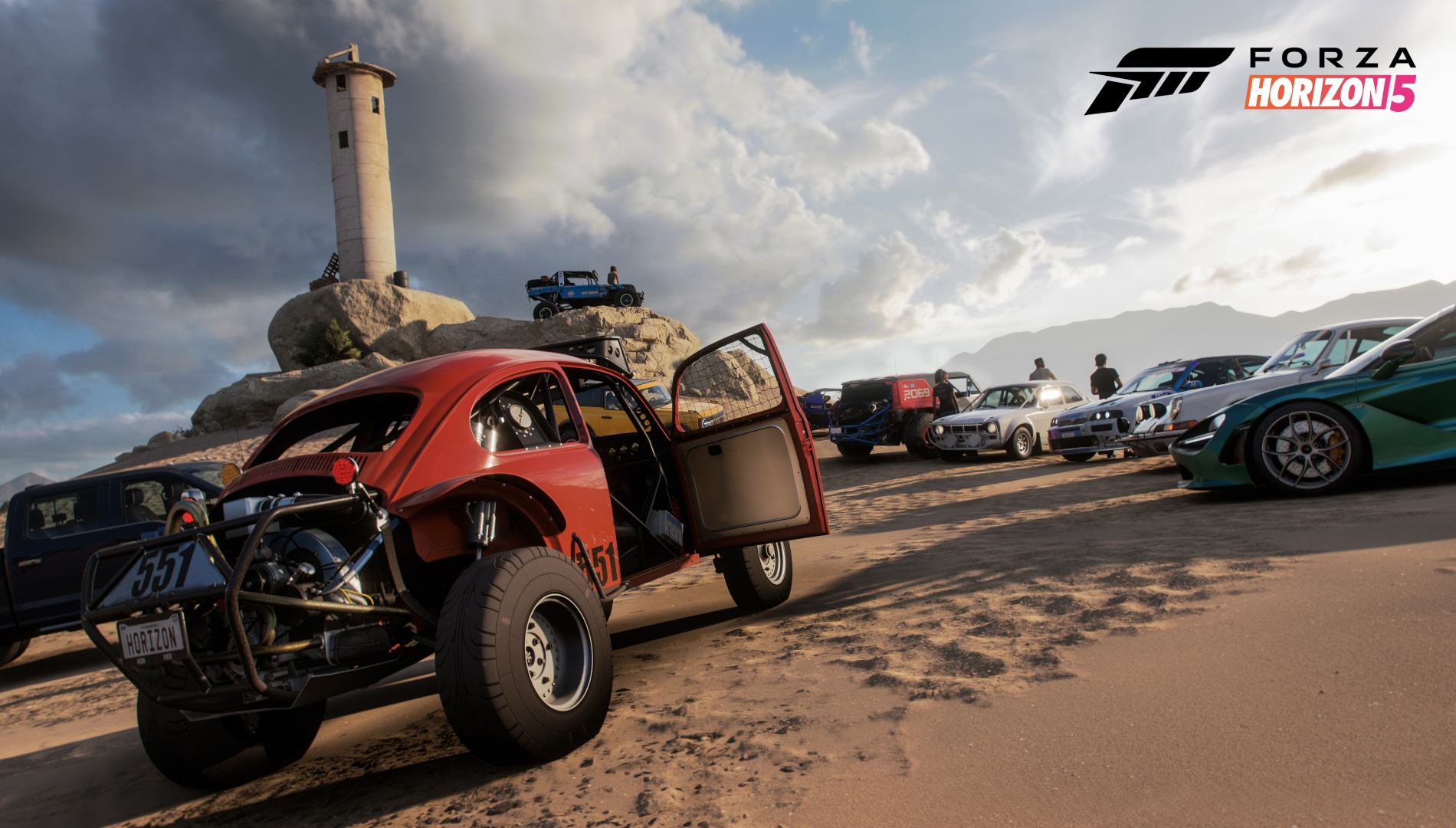 Forza Horizon 5, while leaning on some of the more sim-like racing mechanics and handling systems, doesn’t shy away from the arcade side of the gameplay. Thus, Forza Arcade and EventLab exist in-game for players to dive into multiplayer challenges that air on the wackier side. Admittedly, this is not an aspect I was able to get all that much time into. However, Forza Arcade is a section of the game I want to spend more time with as it can be a hoot with friends. EventLabs, as it stands, offers a small selection of races built using the gameplay toolset. Though, it won’t be long until the community builds an impressive selection of races, stunts, and custom game modes.

While keeping on the straight and narrow, Forza Horizon 5 is the best the series has ever been and is a must-play on the Xbox Series X.

Playground Games pulled no punches when bringing its ambitious take on the Forza Horizon franchise to the table. Loaded with familiar elements and new core features all wrapped into a delightfully stunning package, it’s hard not to be impressed with the robust offering. We often look at sports and racing games and wonder how they can be elevated. While keeping on the straight and narrow, Forza Horizon 5 is the best the series has ever been and is a must-play on the Xbox Series X.

Forza Horizon 5 is available on November 9 on PC, Xbox One, and Xbox Series X/S. It’s also available on Xbox Game Pass. Physical copies of the game are available at Best Buy, Amazon and more.