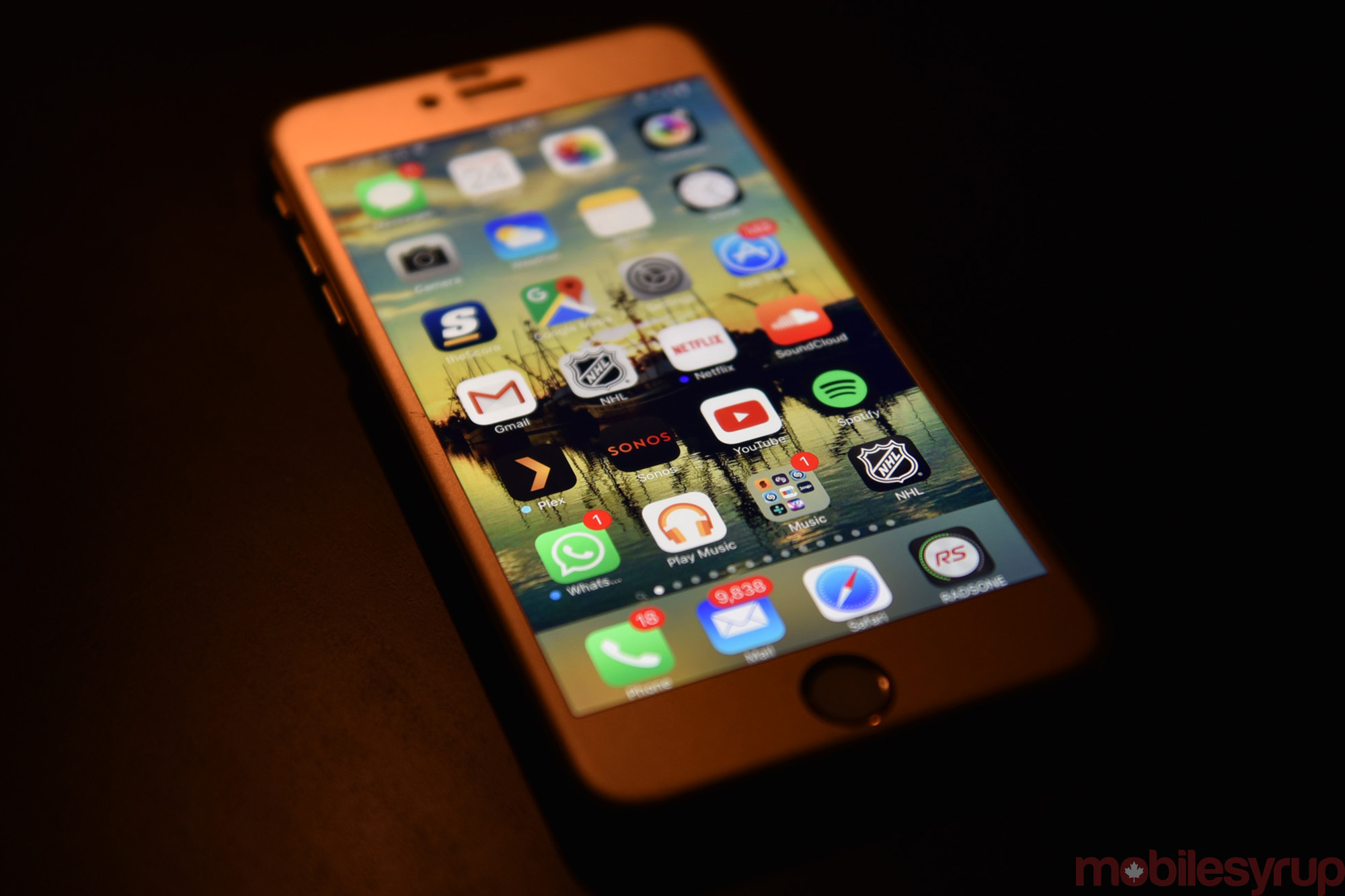 Some iOS updates are much bigger than others, but anytime one is beta tested for two months and gets airtime at an Apple event, it inevitably garners additional scrutiny. While version 9.3 offers solid updates and features, it’s not an entirely rosy picture out of the gate.

Upon testing iOS 9.3 since it rolled out on March 21st, the main reason rests with Night Shift, though CarPlay isn’t too far behind.

Night Shift is the most highly-touted feature in 9.3, by addressing the amount of blue light emanating from the screen at night. The feature is new to iOS, but has existed on Android with third-party apps, like Twilight and BlueLight Filter. It’s a relatively small feature that is designed to have a significant impact.

Having tried it since updating to the new version, I have found the shift to the orange-yellow tint easier on my eyes, though I never really had much trouble sleeping after viewing an iOS screen before bed in the past. How the yellowing effect might impact other users is naturally subjective, so only time will tell.

Apple made it easy to turn the feature on by including a button at the bottom of the Control Center pull-up menu. This way, you can initiate it in a dark room or on a plane where the lights are turned off, for example. Under Settings > Display & Brightness > Night Shift, there are options to schedule the feature’s use or have it work automatically from sunset to sunrise. 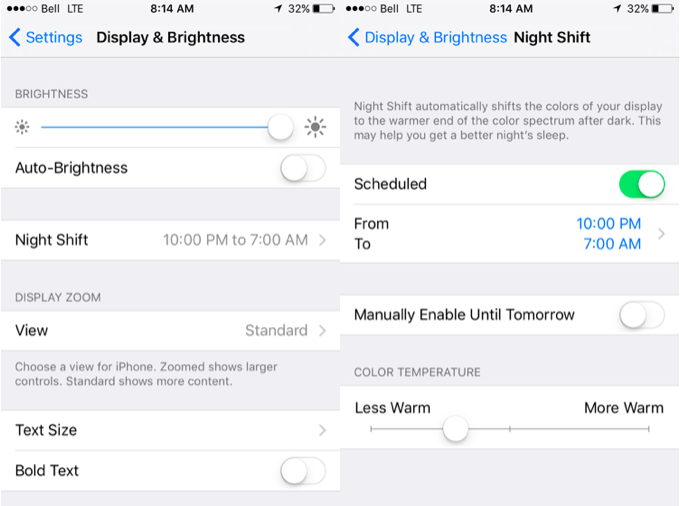 It uses virtually no processing power, and doesn’t appear to save any battery life, either. Moreover, the feature only works with 64-bit iOS devices running the A7 chipset or higher, which cuts out a fair number of units already out in circulation. Every iPhone from the 5 and earlier (including the 5c), the first four iPad models and every iPod Touch except the most recent one are excluded because they run on 32-bit architecture.

Apple slyly opted not to note any of this when it unveiled the new feature. It also neglected to mention that it won’t work whenever a device is set to Low Power mode. Why a low-powered feature wouldn’t work in a battery-saving mode makes no logical sense, so if there’s a technical reason, the company hasn’t clarified.

In going back to the lighting effect, DisplayMate president Raymond Soneira issued a public statement about Night Shift:

“The Night Shift, which turns down the amount of blue light produced by the display, won’t significantly affect the production of melatonin enough to influence the circadian rhythm and improve the user’s night time sleep cycle. I’ve looked into this before and it’s more of a placebo effect. Turning blue way down is what’s needed, and people won’t want to look at a screen with a strong yellow colour cast.”

To be fair, the science isn’t exact on this to begin with. I personally found the feature to cause less strain, yet noted that Apple makes no promises. Indeed, the disclaimer says, “This may help you get a better night’s sleep.”

Now that it’s released, Apple will surely tweak Night Shift in further iOS updates, including possibly offering greater user control over the colour spectrum. For now, though, many iOS users have been left out in trying it.

Then there’s CarPlay. Apple tends to do little to this platform between major iOS updates, and that trend essentially continued here. Perhaps much more is coming in iOS 10 (or X, if going by Roman numeral), but for now, minor additions are all that’s being offered to drivers.

However, it is nice to see that stabilizing the platform seems to have been taken seriously. In my testing so far, the platform now launches considerably faster and doesn’t randomly fail or disconnect like it used to, particularly after 9.1 was released. In fact, I suspect it might launch even faster on newer vehicles that have CarPlay built-in to their infotainment systems, though I can’t say for sure until I test it.

The “Nearby” feature for Apple Maps is long overdue, and adds a nice layer of convenience for finding basics, like gas stations, parking, coffee, restaurants, groceries or quick directions to a destination. Three options appear in each instance, and it’s not necessarily easy to scroll through any more, but the feature does a good job of updating the list as your location changes.

The other main feature Apple touted was adding “New” and “For You” sections to the Apple Music app on CarPlay. These will only show up for subscribers, so as I’m no longer one myself, I didn’t have them on my screen. For those who are using the streaming service, including these two sections bridges the massive gap between the mobile app and its projection on the car platform. 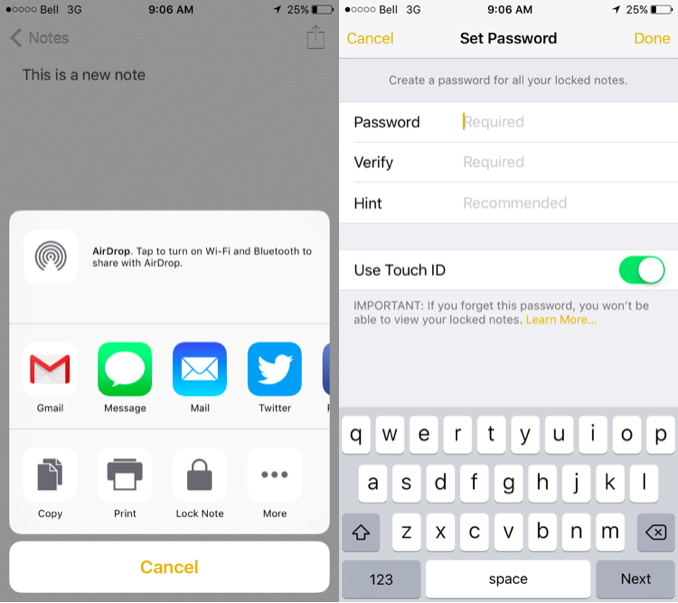 There’s not much to report on here, but it is worth noting that you need to upgrade the notes in the Notes app first before the lock feature appears. This can be done by tapping “Upgrade” on the main Notes page in the app. From there, any note can be locked or password protected by tapping the Share button at the top of the screen and choosing “Lock Note.”

You can go with Touch ID or a passcode to encrypt individual notes, depending on your preference. All locked notes have to use the same password, which is why using Touch ID might be the more attractive option.

With Apple’s Worldwide Developer Conference (WWDC) coming up in June, and the next major iOS update coming in the fall, two more minor updates could come between now and then. A beta of iOS 10 will come soon enough after the conference, too.

The modest upgrades in 9.3 are not groundbreaking, but they are useful, in spite of the perception that Apple didn’t go far enough in adding features that arguably should have been present long ago.