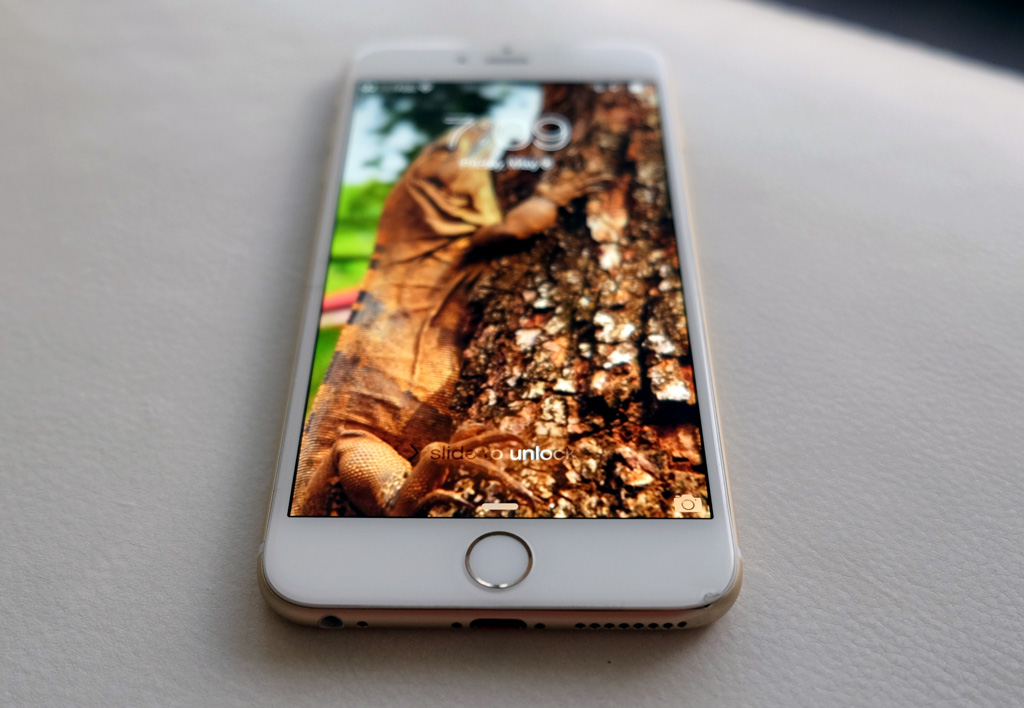 Apple isn’t the type of company that admits when it misses the mark. The iPhone 6 Plus wasn’t so much a product of Apple’s vision, but rather a response to how competitors, namely Samsung, had tilted the market. It was playing catch-up by enlarging its vaunted smartphone to new lengths.

Since the company bundles all iPhone sales together in its quarterly reports, it’s unclear how many of the 136 million sold in the last six months are of the Plus variety. Even if we’re to take it at a relative fraction of overall sales, the device is still circulating in many hands.

The success of the 6 Plus is largely driven by its smaller brethren, the iPhone 6. To jump from the 4-inch displays of the iPhone 5, 5s and 5c over to the 4.7-inch of the 6 is one thing. To move all the way to the 6 Plus and its 5.5-inch screen is another. Large displays are vogue nowadays, though Apple certainly took a while to see it that way.

Its very size puts it in a bit of a no-man’s land — still noticeably smaller than an iPad mini, yet appearing monstrous next to a 5s. Since iOS lives and breathes in much the same way between the iPhone and iPad, there isn’t much of a transition to the software user experience, like there was initially with Android. But developers had to get up to speed, optimizing their apps for the extra real estate, while Apple had to make some adjustments of its own.

Six months after the iPhone 6 Plus launched to the masses, how does it compare to the other big boys on the market, and how have the iOS updates released since affected it? 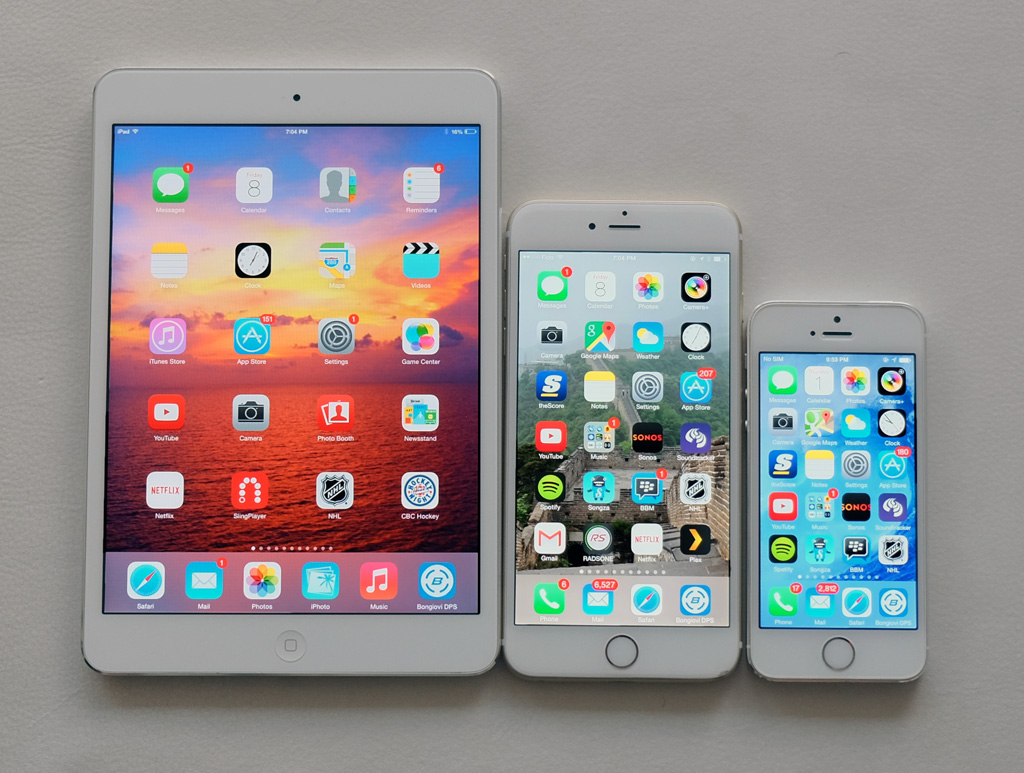 On paper, the iPhone 6 Plus should be trounced by its competition. Would an Android handset of this size even garner a cursory glance as a heavy-hitter if the spec sheet showed 1GB of RAM, 1080p display, 8MP rear camera and 16GB internal storage? By flagship standards, these would now be considered antiquated figures.

Of course, a spec sheet never tells the full story. Most iPhone users don’t think about it, but iOS has always been highly efficient in how it handles RAM. I’ve heard people complain about performance in an iPhone 5 — a three-year-old phone — running iOS 8, but rarely am I within earshot of a gripe about the 6 Plus doing the same.

Apple has been coy about RAM, not even noting it in the spec section for the iPhone 6 and 6 Plus on its website. And, admittedly, I tend to forget that I’m using a smaller RAM chip than many of the other Android handsets I’ve tested in the last year or two. The phone seems to be able to handle whatever I’ve thrown at it. With over 400 apps and a nasty habit of keeping several frozen in the background, I’ve come to be impressed at how well the device manages to stay robust.

It’s the question I hear most when I have it in hand. A little unwieldy, and one-handed operation is problematic at times (even with Reachability turned on), I tell them, but overall, it’s a device that grows on you (ed. no pun…). The extra pixels don’t hurt, either. As good as an iPhone 6 screen looks, I always gaze back at the 6 Plus and feel like I’m looking at a tighter, brighter and lighter display.

But the look has to match the feel, and that’s where I’ve sometimes found that bigger isn’t always better. The iPhone 6 looks sleek. So does the iPad mini. I can’t really say the same for the 6 Plus. Yes, it’s thin, it’s fairly light and it never bent in any way (for me, at least), but it’s also been slippery and easy to drop. I’ve long patted myself on the back for a stellar record of keeping phones safe from dropping, but the 6 Plus got me. I’ve dropped it a few times, and while it has a bump or two, there have been no other consequences, performance or otherwise. It’s been months since I last dropped it and it’s kept on working without missing a beat. 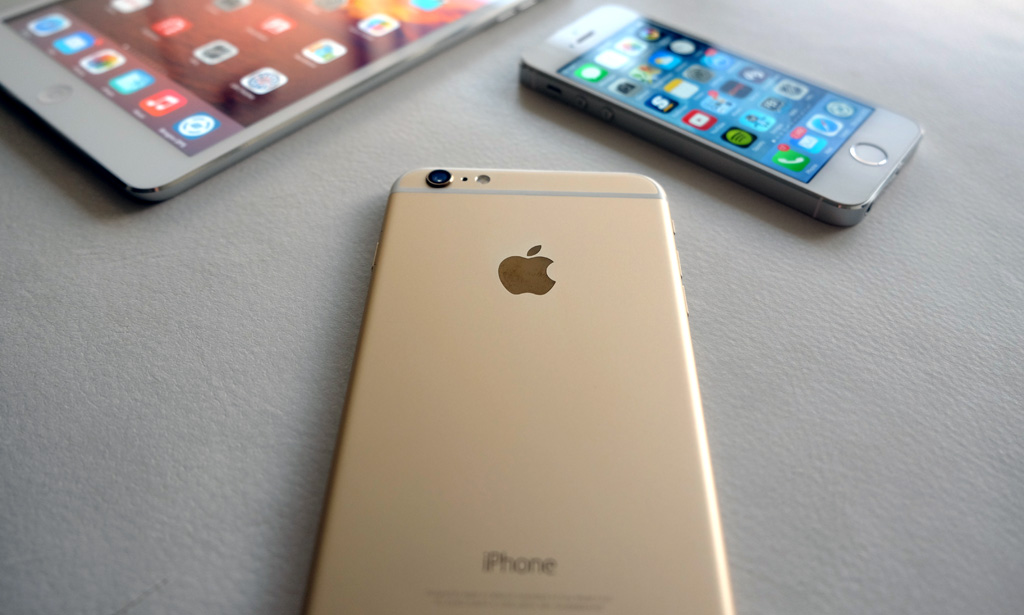 To accommodate the larger screen, Apple had to stretch out iOS in all the right ways. Part of this was to provide a measure of choice in usability between Standard and Display Zoom views. The former fit in more information and looked sharper, while the latter fit in less by making everything look bigger. I started out with the zoom, only to move over to standard within a month, simply because apps look better at native resolutions. I couldn’t help but be reminded using iPhone apps at a 2x zoom when the iPad first launched. This isn’t nearly as bad, mind you, but perception is powerful.

Still, Apple was in an advantageous position. It essentially had two new screen sizes, whereas Android developers have to accommodate dozens. It’s no accident that the tight fusion of hardware and software made the 6 Plus a viable option right out of the gate. Any experience with an iPhone or iPad mini already proved that the operating system was scalable. 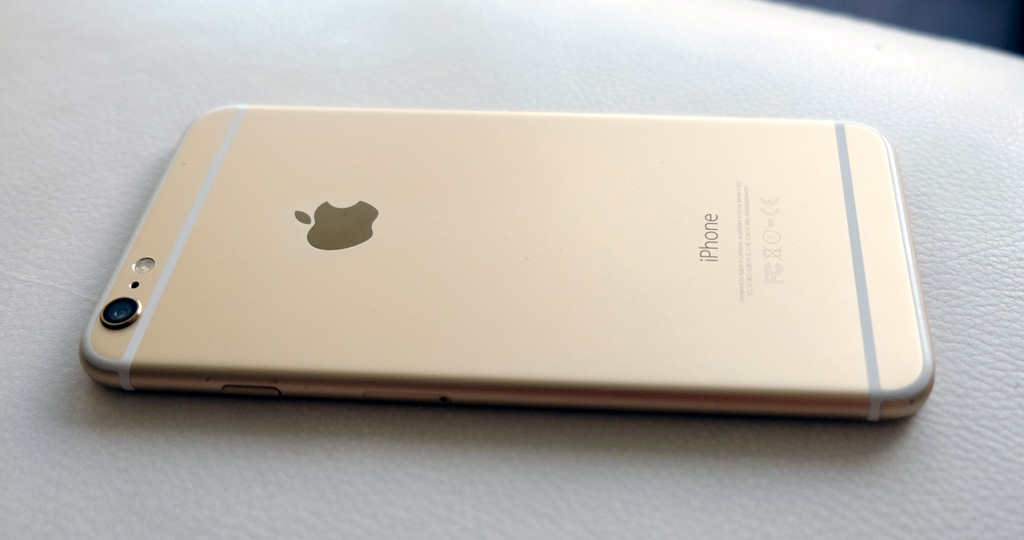 Unlike the visual makeover that was iOS 7, subsequent updates have focused more on usability and integration. The 6 Plus came with 8.0 already installed. After the initial debacle that was the 8.0.1 release, a quick fix came with 8.0.2, settling things down until version 8.2 rolled out in March. Apple has since killed off 8.2 completely by code signing, forcing users to upgrade directly to 8.3. These amounted to tweaks on the 6 Plus, rather than structural changes.

Despite that, it would be prudent to note some of the issues that have vexed the device along the way. Even as I write this, I still can’t understand why my iPhone 6 Plus is unable to briskly switch from landscape to portrait mode when on the home screen, especially when it performs is good within apps. At least there’s been a notable improvement in app stability; unexpected crashes happen far less often than in the early days of iOS 8. There is the odd one, like when NHL GameCenter or SoundCloud decide to call it quits for some inexplicable reason, but it’s been a steady improvement over the last six months.

Nothing particularly drastic has changed from my perspective. Adjusting font sizes has been around since iOS 7, so any 6 Plus user could fiddle with that to customize text. The camera, among the best I’ve used on a smartphone, has continued to be a stalwart, though I’ve yet to see any real upgrade in software performance. It’s the third-party apps that are doing better in that regard.

The competition is catching up and issuing serious challenges though. The Samsung Galaxy Note 4 and Nexus 6 are big guns, while the LG G4 and Galaxy S6 have improved their cameras to the point where I feel they outperform the 6 Plus in certain situations.

What’s impressed me most, however, is the battery life on the 6 Plus. It’s easily the best I’ve seen on a device this size, and to this day, I’m not forced to charge it every day, as I must with others. This is a testament to the efficiency with which the phone functions, since it is my daily driver (unless I’m testing a different phone, but even then, I take the 6 Plus along anyway).

I do wonder if that’s the case with the Apple Watch, considering the integration iOS 8.3 delivers may be one way to keep the 6 Plus tucked away more often. Being the most unwieldy handset the company offers, the Watch’s presence should theoretically give the 6 Plus fewer mundane tasks. It hasn’t always been convenient to have to pull out the phone from my pocket, only to read a simple text message that says, “K” or “Yeah.” Even though the earbuds I use (I never use Apple’s) have playback controls, switching playlists or searching for music does require pulling out the phone — ostensibly a solution the Watch would provide.

Without having a Watch to test out, I can’t say for certain how much of a happy marriage this would actually be, but I have no doubt that Apple designers and engineers paid special attention to the 6 Plus’ size when developing the software.

I imagine they will be doing the same with whatever iOS 9 will turn out to be. What will it enable the 6 Plus to do, and how well will it run it? The screen’s size should ideally open up things like split screen multitasking, more dynamic notifications and maybe even some unique usability tweaks for one-handed or voice operation.

The iPhone 6 Plus has held up very well thus far, and more be revealed about how efficient it could still be during Apple’s Worldwide Developer Conference (WWDC) on June 8.