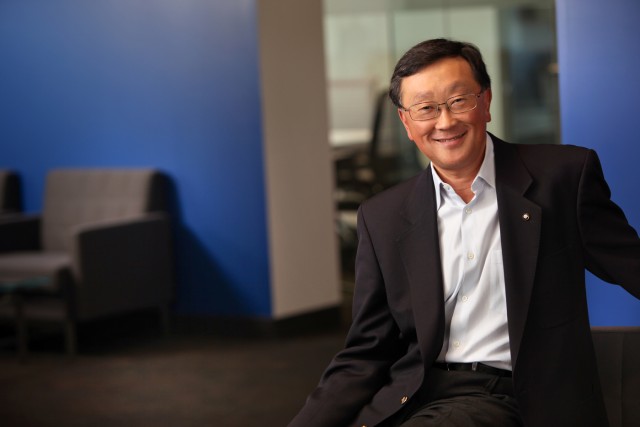 BlackBerry claimed a narrow loss in the first quarter of fiscal 2015, but the company is close to emerging from its darkest historical time on the back of the John Chen’s efficient leadership.

BlackBerry posted an adjusted operating loss of $60 million, or $0.11 per share, on revenue of $966 million for the quarter. Gross margins increased to 48% from 43% in the prior quarter, which was way above analysts’ expectations.

The company is downplaying its handset sales, though it did recognize revenue of 1.6 million handsets, compared to 1.3 million in the previous quarter. As with previous quarters, BlackBerry sold more devices than it recognized — 2.6 million — because channel inventory was moved in prior quarters.

John Chen’s turnaround appears to be working — investors like the results, too — as cash on hand increased $400 million to $3.1 billion at the end of Q1.

This has been a big quarter for BlackBerry, launching the all-touch Z3 handset in Indonesia; adding a store to BBM; launching Project Ion, the company’s Internet of Things push; adding EnStream as a partner for mobile payments; and yesterday, adding Amazon’s Appstore to its BlackBerry 10.3 platform.

Despite an emphasis on increased revenue from services, revenue from hardware actually increased in Q1 by 2% to 39%, while services revenue declined 2% to 54%.

“Our performance in fiscal Q1 demonstrates that we are firmly on track to achieve important milestones, including our financial objectives and delivering a strong product portfolio,” said John Chen, Executive Chairman and Chief Executive Officer of BlackBerry. “Over the past six months, we have focused on improving efficiency in all aspects of our operations to drive cost reductions and margin improvement. Looking forward, we are focusing on our growth plan to enable our return to profitability.”

Chen confirmed during the quarterly earnings call that a new device, the BlackBerry Passport, will be coming in September. BBM for Windows Phone will be available sometime in July, too.

The company boasts 50 million active users across its BlackBerry handsets. And despite bringing back the Bold 9900, the company is finally selling more BB10 devices than BBOS ones — 65% to 35% this quarter.

There are 160 million registered BBM users and 85 million active users.