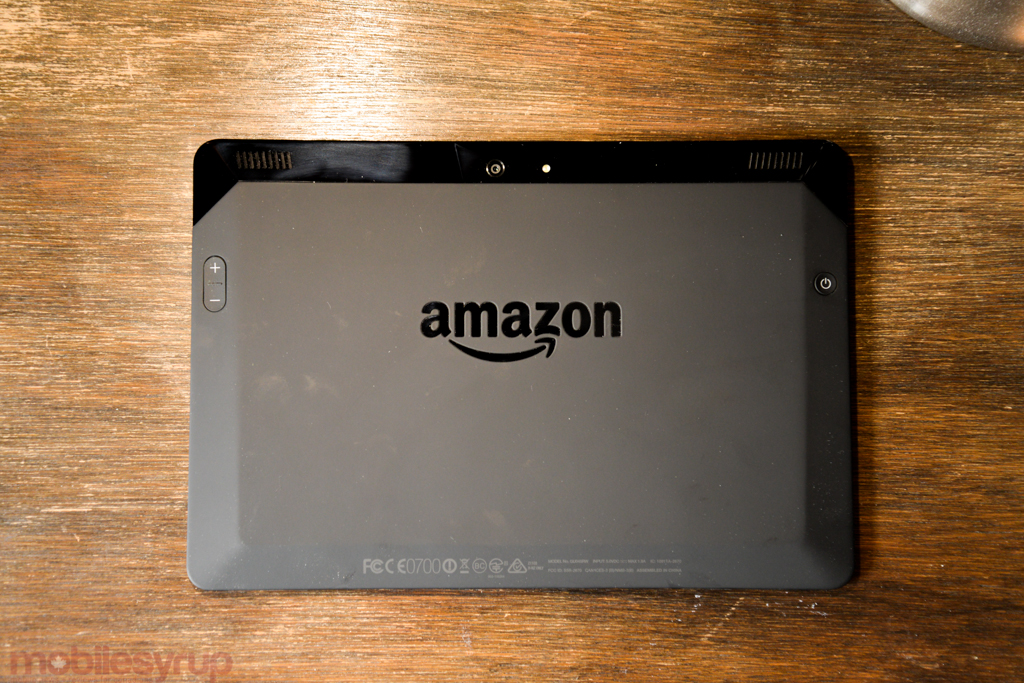 In many ways, I’m glad Amazon took its time bringing the Kindle Fire series of tablets Canada. Now in its third generation, Kindle is a brand both mature and distinguished from other Android devices; its Fire OS, though separate from the Play Store universe, boasts the extensive feature set one would expect from a modern tablet, and its hardware is sturdy, well-designed and extremely competitive with industry leaders Apple, Asus and Samsung.

But when Amazon’s Canadian arm began selling the $254 7-inch Kindle Fire HDX and $399 8.9-inch Kindle Fire HDX, many were left wondering, “Why?” Typically, Amazon’s US-centric business has provided a lot of value-add for Kindle Fire users: Prime subscribers get access to a bevy of streaming video content, and the company’s extensive MP3 store is added incentive to pay for music on the cheap. Canadians get neither of these things: we have to settle for books and apps. Are they enough? Let’s find out. 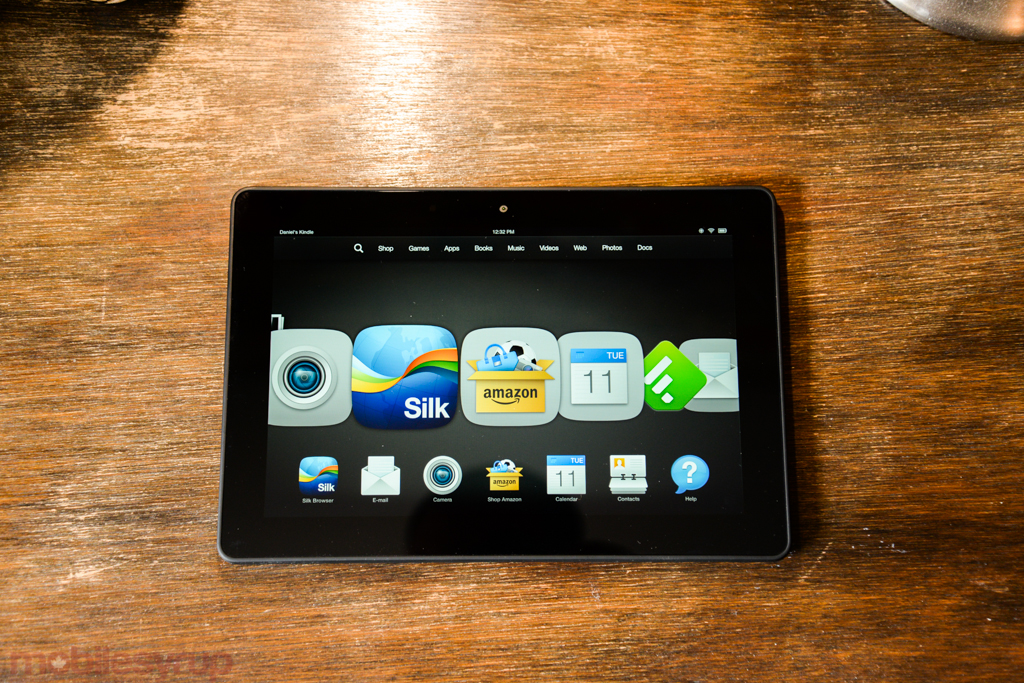 I’m not sure what I was expecting when removing the Kindle Fire HDX 8.9 from the box, but it certainly wasn’t this gorgeous piece of hardware. I recall the original Kindle Fire being a derivative of BlackBerry’s ill-fated PlayBook tablet, a black, boxy utilitarian thing; this is not that. Compact and solid, the back slopes towards the edges, making the tablet feel thinner than it is — this is a trick used by many smartphone makers, but it works even better on a tablet.

The 2560×1600 pixel screen, too, is sharp as a tack and extremely vivid; colour reproduction is comparable to the iPad Air, and certainly better, at least in terms of colour range, than the similarly-sized iPad mini with Retina display. At 374 grams, it’s also lighter than the iPad Air and modestly heavier than the 334g iPad mini. Because of its screen size, the HDX 8.9 feels neither clumsy nor uncomfortable in portrait mode; many larger tablets with 16:9 or 16:10 aspect ratios only work properly in landscape mode. 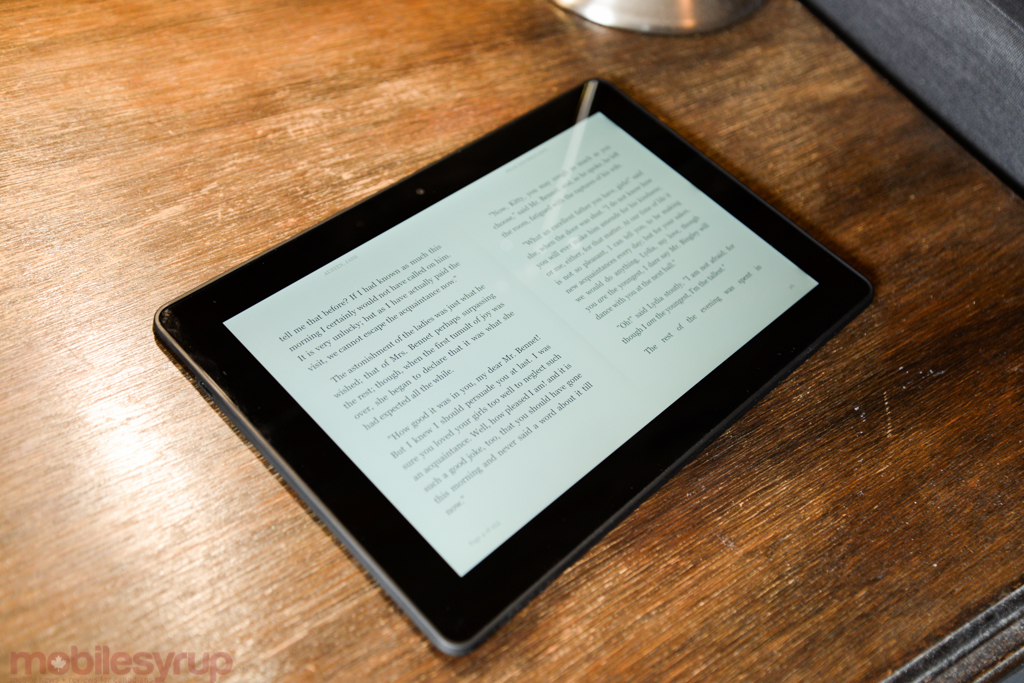 Fire OS 3.0 feels smooth: based on Android 4.2, Amazon’s interpretation lists oft-used apps in a scrolling carousel on the home screen, while the rest can be seen by swiping up from the bottom of the screen. Amazon also tied up many of the loose ends from previous versions: consummate mail, calendar, contacts and camera apps are included, though none of them tie in directly with Google’s Play Services.

Indeed, this is the first Android device I’ve used that doesn’t expressly need the Play Store, and while I can’t say all is grand — especially since Canadians don’t have access to the same content services as Americans — the app situation is certainly not dire. Amazon’s App Store offers many of the same apps — Flipboard, Evernote, Songza, Twitter, Facebook, Feedly — and games — Angry Birds, Candy Crush, Minecraft, Cut the Rope, Plants vs. Zombies, Temple Run 2 — as Google Play, but the tail isn’t quite as long. Nor does it offer the same variety of interesting independent titles, preferring to work with big-name partners like EA, Rovio and Gameloft. 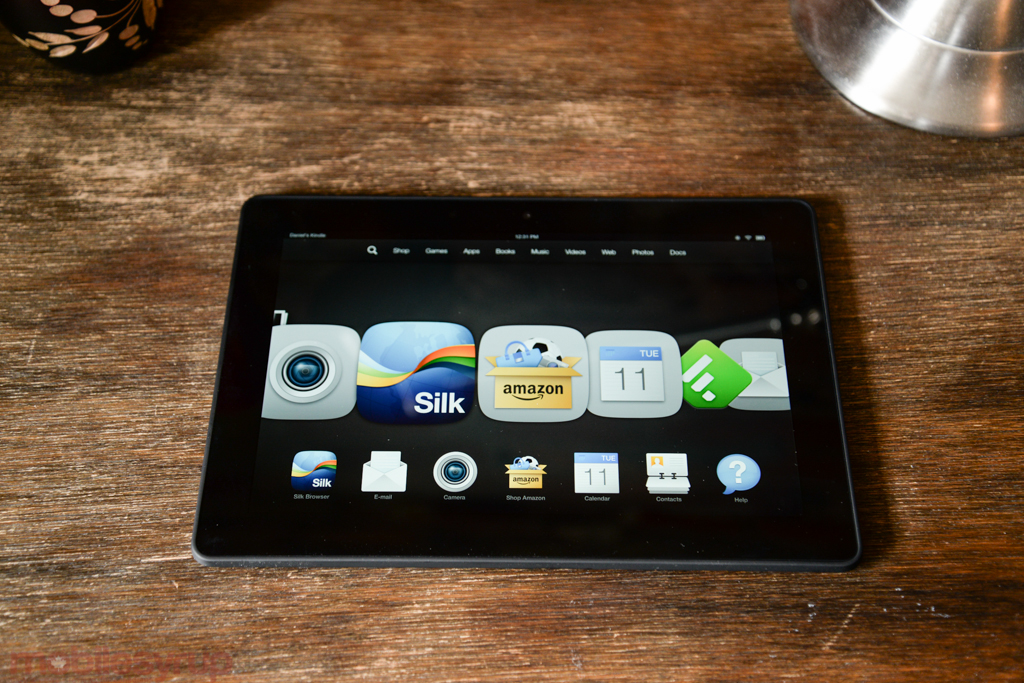 What’s available is very smooth: this is perhaps the most performant Android tablet experience I’ve used outside top-of-the-line Samsung tabs. Apps load quickly, video content plays without a hitch, and the keyboard, which has excellent autocorrect, never stutters. If you can find something to do, it will work very well. 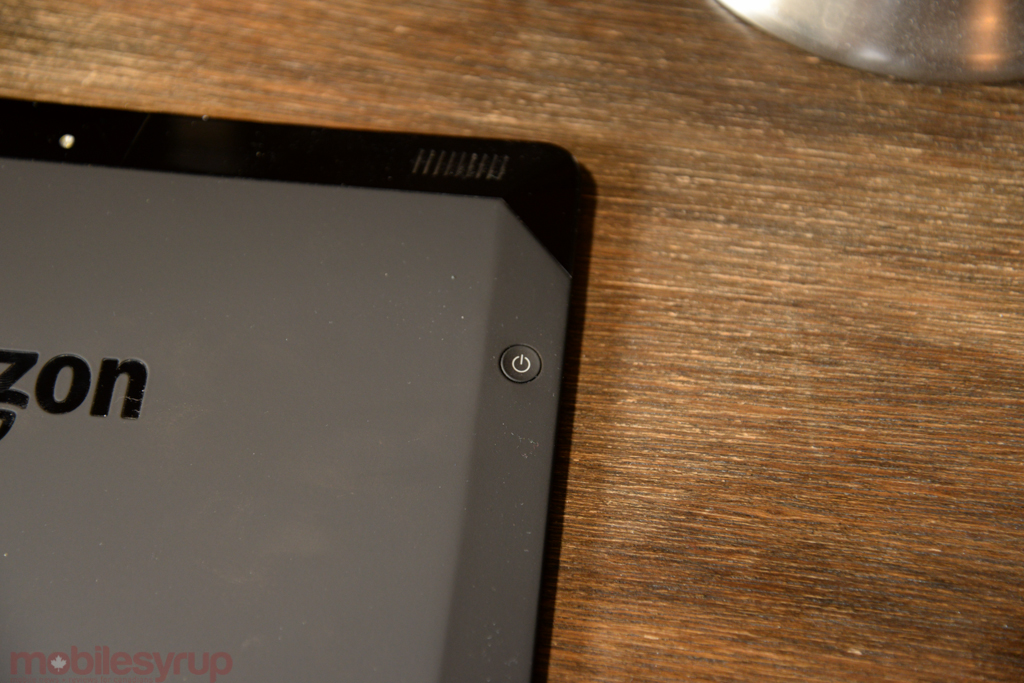 Kindle’s advantages are twofold: the e-reading experience is fantastic, with a wide variety of books, magazines and journals at prices typically better than Apple or Google. While the Kindle reading app is arguably better on iOS than Android, Amazon still has an advantage over Kobo, whose Android e-reading app is merely adequate. Newly added to the Kindle reading experience is X-Ray, a summation of all the important characters and story elements in the books you’re reading. The ultra-sharp screen makes reading an absolute pleasure, and the tablet’s lightness offers excellent one-handed usage.

While the software and content availability leaves something to be desired, Amazon’s hardware is unmatched for the price. At $399, it’s $120 cheaper than the iPad Air (which it is competing against) and $20 cheaper than the smaller iPad mini with Retina display. The screen is sharper, the stereo sound is better, and the matte backing feels nicer to hold. 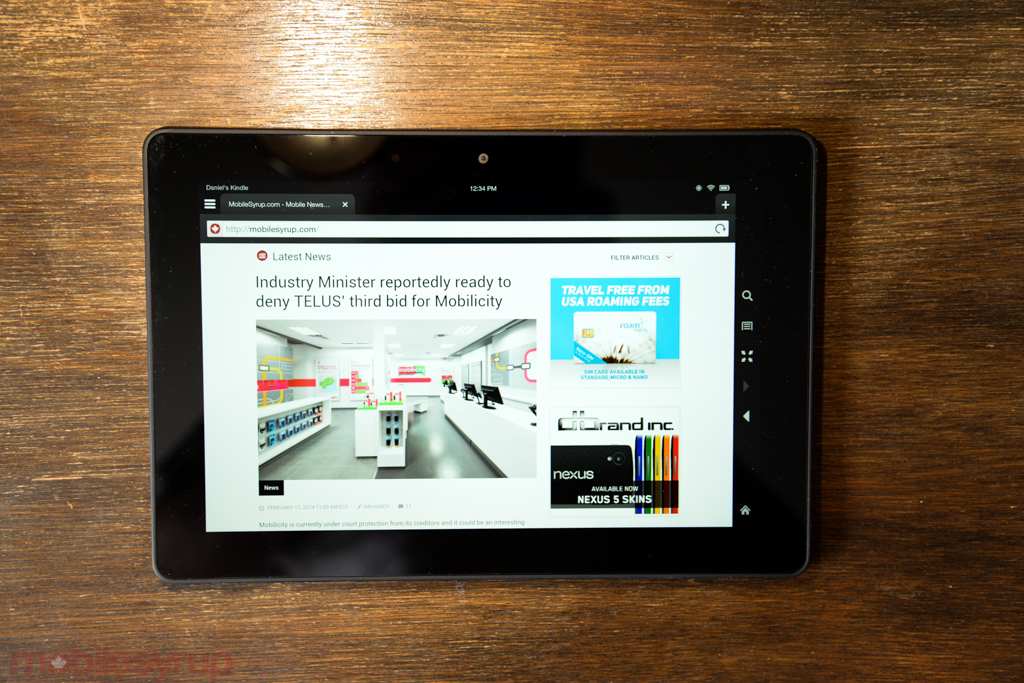 Unfortunately, for Canadians the advantages over the iPad end at the hardware level. As stated above, I wouldn’t say there is a dearth of decent software on the Amazon App Store, but few of them are optimized for the screen size — they are merely ported Android apps, with the same upscaling issues as every other Android tablet — and those present don’t usually compare to iOS in quality or features.

But content issues are manifold, as users will have to go elsewhere — outside of the Amazon ecosystem — for video and music content. Rdio, Slacker, Deezer and Songza are available on the Store, but 7Digital, the other legal source of music outside of iTunes, is nowhere to be found. Similarly, Netflix is present, but there are few ways to pay for individual movies or television shows. Of course, it’s possible to transfer audio and video content manually to the Kindle, but the procedure feels very analog in today’s cloud-connected ecosystem. 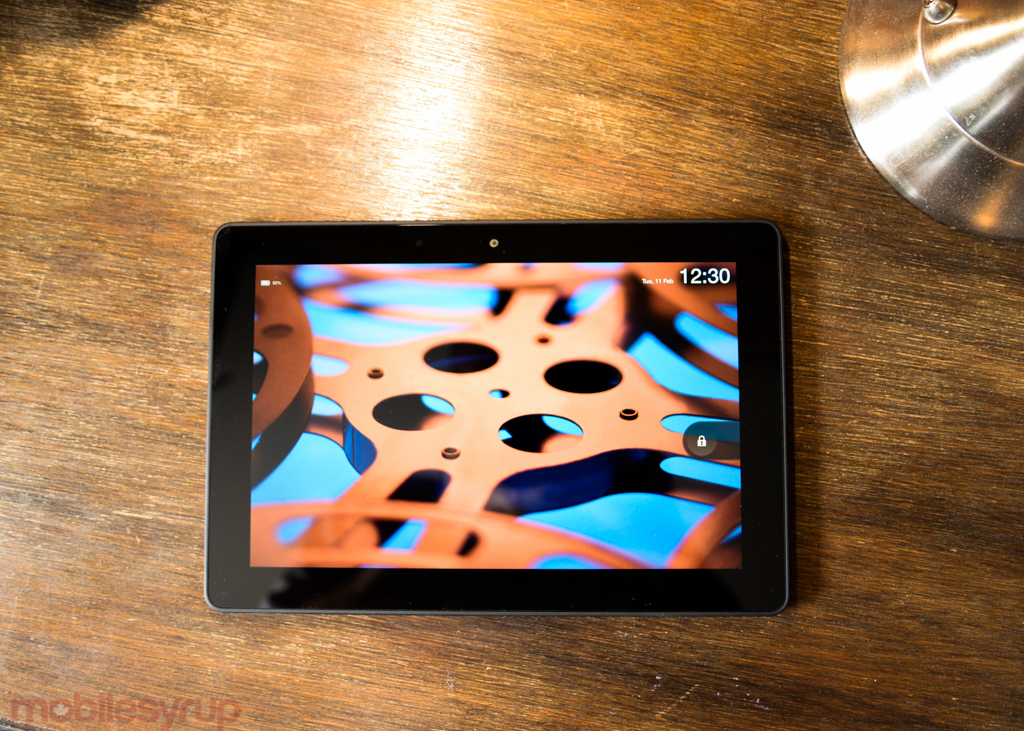 The Kindle Fire HDX 8.9 may be an expensive tablet to use exclusively as an e-reader, but it may be appropriate for those looking to augment a high-percentage e-reading use case with the occasional email, browsing session or bout of Temple Run. It’s clear that the Kindle Fire series has not yet been optimized for Canadian audiences — most of Amazon’s best cloud features are unavailable outside of the US, and many popular Android apps and games are missing from the App Store — but its superlative hardware and excellent performance more than makes up for it.