Apps that make music sound better in your car 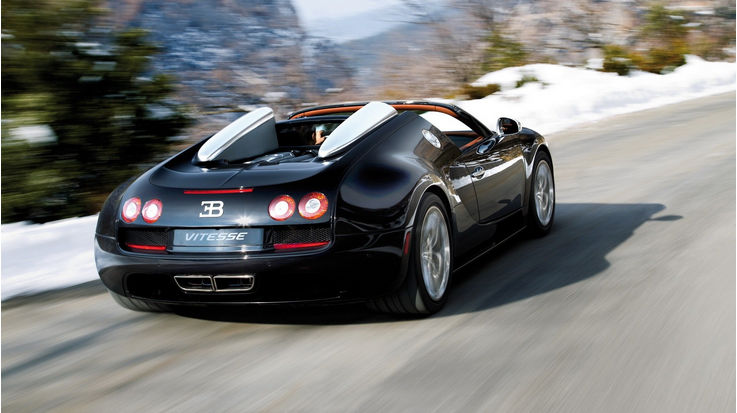 Now that mobile devices are the music player of choice for many drivers on the road nowadays, it might help to augment the experience even more by using apps that enhance the audio quality of the tunes you have stored on your phone or tablet.

The standard music player apps for iOS and Android aren’t particularly impressive, and a good car audio system, as nice as it may be, won’t necessarily make up for the compression of modern file formats like MP3 and AAC. Factory stereos have come a long way in just the last 10 years, where even affordable compact and mid-sized vehicles actually offer decent systems. The beauty of apps is that they can improve your phone’s existing features, including the music you have stored on it.

Playing around with an EQ can lead to interesting results, though not everyone likes having to tinker with sliders to get the right sound. Upgraded car audio systems, be they factory or aftermarket, usually have some kind of EQ in the head unit that includes presets. This is great for music from streaming apps, like Songza, Rdio, TuneIn and the litany of others that are available, but automating the process for the music you actually store on the phone is a great way to get better sound in the car on the cheap. 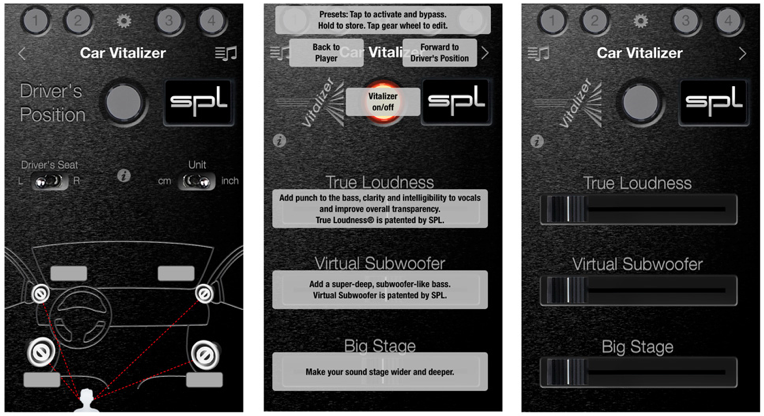 The most intricate app in that regard is Car Vitalizer for iOS. It comes from SPL, a renowned German audio manufacturer, and it’s essentially a software version of the technology used in its product line, where the enhancing engine is separated into a “Driver’s Position” and the “Vitalizer”. The Driver’s Position is a lot like it sounds in that you measure the distance between woofers, tweeters and how far those are from your ears. The manual details all this in a multistep process that might seem like overkill, but there is a method to the madness.

After that’s done, the Vitalizer optimizes music playback for the individual speakers so that the driver is in the “sweet spot”. There are three main slider modes in which to manage the effects. True Loudness adds depth to the bass while adding clarity to vocals, Virtual Subwoofer deepens the bass further and Big Stage gives music more spatial resonance, making instruments sound more precise and giving melodies a wider range.

The grey button in the middle toggles the effect — if you’re not sure, orange means it’s on. I liked that I could save four different presets, not only for a genre of music but also if I wanted to keep one or two for a different car altogether. The manual, as long as it is, is highly detailed and shouldn’t detract from what is an otherwise user-friendly app. The interface could use some work, but given the app is less than two months old, that could be coming in future updates.

Note that there is a three-day trial whereupon the app’s full features will cost $7.99 to unlock. If you’re a stickler for playing music in your car from your iPhone, iPod touch or iPad without worrying about quality, Car Vitalizer is made for you.

There are others that simplify things a little more by offering less customization, albeit maintaining solid performance. Bongiovi DPS is among the most recognizable because the audio engineer behind it is a cousin to Jon Bon Jovi himself. Like Vitalizer and the other apps, the app taps into the music stored on your phone (DRM-protected files won’t play) and basically presents you with a similar menu system. Play a track, and noting the blue button in the middle, that’s an indication the audio enhancer is on. Tap it to turn it white and you hear what your music sounds like without it.

Despite the fact there’s an EQ built-in to the app you can toy with, there’s a more automated approach taken here. A $0.99 in-app “Advanced Features” purchase unlocks all the “profiles” it offers, named after cities in the U.S. While there are specific ones for headphones, speakers and AirPlay, there isn’t a set one for vehicles, though Bluetooth would apply if you’re streaming music in your car that way. If it’s a hard-wired connection via Aux-In or USB, the Dock or Speaker selection best applies.

You can download profiles directly to the app in case the one you’re looking for isn’t there. It’s a decent list, though misses a significant number of manufacturers, so it’s by no means a comprehensive offering. Still, it’s impressive because each one of them has been tailor-made for use with the app. You’ll note that the city-named profiles are widely varied, ranging from low-reverb to high treble and deeper bass, but you won’t actually know for sure until you toggle through them while listening to music.

Radsone is a similar experience. Using what it calls “digital noise suppression”, it improves the sound quality without much know-how. It offers a handful of standalone auto settings — Dynamic is most ideal for cars. Of course, you have a full EQ to play around with, and up to three presets to save, so you’re covered if you like a few different genres. Swipe to the right and you can experiment with the sliders for noise suppression, sound stage depth and high-dynamic range.

After a slow start, the app is now getting regular updates that keep on improving everything from performance to UI. It’s bit pricey at $4.99 but is well worth it if you have a finer-tuned ear for your music. 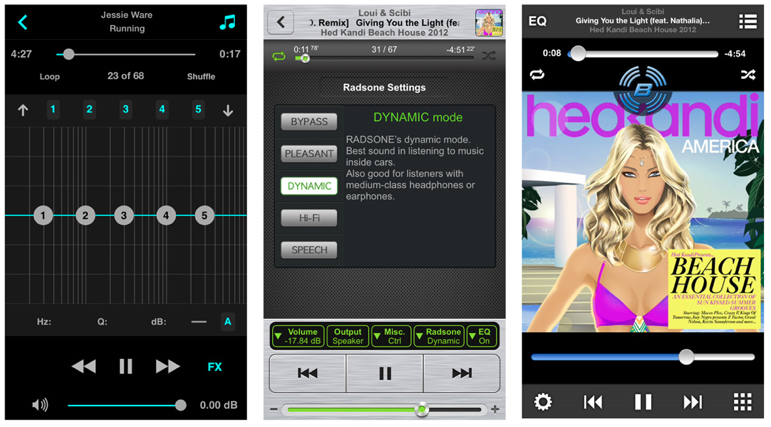 For something a little more traditional and manually-focused, EQ 10 fits the bill nicely. It won’t score points for beauty, but it does the job well and has plenty of support behind it. You can save custom presets by tinkering with the EQ while a song is playing and keep them in tow whenever you need them. The interface isn’t conducive for use while driving so it’s best to apply a preset to a playlist and go from there.

Unfortunately, not one of the four apps mentioned is available on Android (or BlackBerry and Windows Phone, for that matter), but the never-ending market that is Google Play has something to offer, nonetheless.

For Android, there are a number of options, but you do need to be cognizant of the diamonds in the rough because some of them are awful. Music Volume EQ has steadily risen among the best ones due to its reliability and ease of use — and perhaps because it’s free. The best way to use the app is to plant a widget onto one of your home screens, since it doesn’t have its own built-in music player. Instead, it applies the equalizer effects from the regular music player or many of the other third-party ones available via Google Play.

There are only nine presets to choose from, but there are several slots for custom ones, which is really the idea behind this. If you have a certain taste for how a playlist or genre should sound in the car, you can save that specific preset and get to it quickly through the widget. The five-band EQ is complemented by bass booster and virtualizer dials that are nice tools, though all but impossible to manage manually while on the road. Custom presets reflect your choice in settings there, too, which is nice so that you don’t have to tinker further. 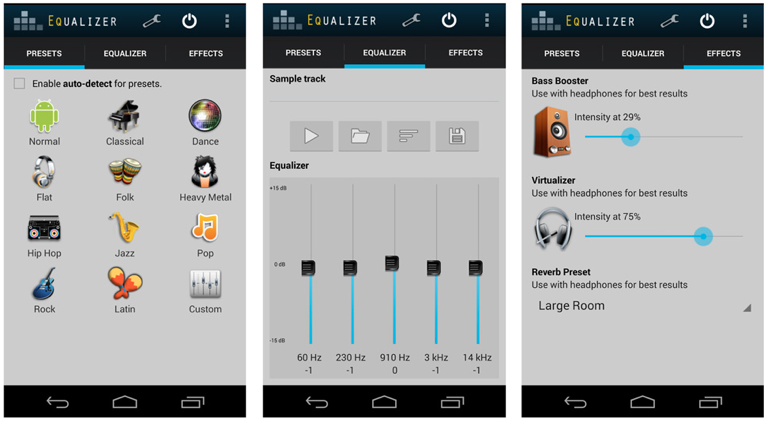 Equalizer is another that offers a lot of the same features, albeit with a better-looking interface. It doesn’t work as a widget and it seems to hate it when you have another equalizer app installed on your device. In fact, it even tells you to remove and uninstall the others to make room for it as the default. You can go that route, of course, if you find the app to be the best of the best. The visually-pleasing design makes it easy to understand how to use it, though it really would’ve been interesting if a car-specific preset was included. It’s a shame that you have to pay $1.99 for the “unlock key” to actually save custom presets.

I found that the “Flat” preset meant for headphones translates well in cars, too, but playing around with the five-band EQ, bass booster, virtualizer and reverb yield some interesting custom results. I particularly liked how the reverb presets for small and larger rooms translated to the car, as they added a cool effect to the music I wouldn’t get otherwise.

JetAudio is another EQ app that doubles as a replacement music player, so you’re running only one app instead of two, like the others. It has loads of presets — more than the other two apps combined — but you will definitely be saving your own presets anyway. Tap the equalizer icon on the top right to access the sound effects. Here, you can play around with the different dials and save up to four presets. I liked that warnings would pop up indicating that overdoing it with one effect over another might degrade or distort the song, though your ears might deduce that pretty quickly on their own.

There is a $3.99 upgrade to a “Plus” version that gives you a 20-band EQ for greater precision and full access to the AM3D Audio Enhancer that includes dials for bass, treble, surround and bass boost. The developers practically push you toward paying extra to unlock all the features with all the restrictions in place, but it’s not a bad deal if you plan to make good use of what it has to offer.

Sadly, there doesn’t seem to be much of an offering for BlackBerry and Windows Phone, so you may have to improvise somehow when using either of those platforms.

And that’s a snapshot of what’s available for use while you drive. Listening to music stored on your phone or tablet is so common now, but the quality the default apps produce should leave you wanting more, thus making EQ apps like these all the more relevant. Give any one of them a try when cruising the road and you might find that to be more than a little true.