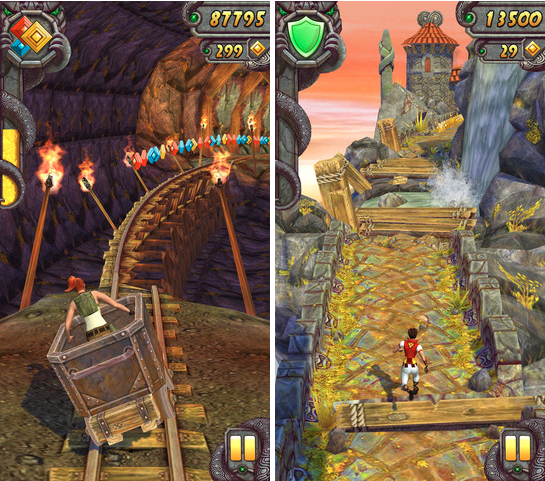 Popular run-and-run-some-more game, Temple Run, is getting a sequel for iOS devices today as the game’s developers, Imangi Studios, try to recreate the simple free-to-play elegance of the original.

The new game looks and feels almost identical to the first, but the environment has expanded from mostly jungle to what looks like a decrepit old fortress. The game introduces three new playable characters in addition to new powerups, obstacles achievements and, of course, more things to buy.

With a free-to-play style, users can enhance their experiences by purchasing new outfits as well as powerups and other niceties that would take ages to obtain by collecting coins. This is well-worn territory by now, as Imangi became very profitable off the original Temple Run for providing a great free game that never felt encumbered by its in-app purchase economy.

Expect Temple Run 2 later today, and we’ll update this post when it goes live in the App Store. The Android version will also be coming next week, confirms creator Keith Shepherd. That’s appreciably less time than the transition from iOS to Android for the original game, and proves that big-name developers are beginning to take Android seriously as a money-making platform.