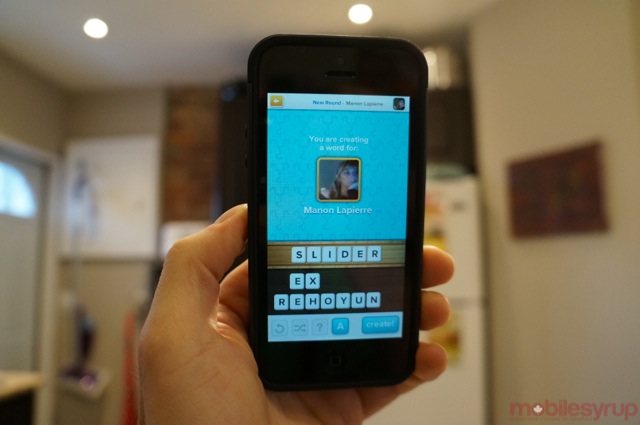 There’s something to be said for words. They confound; they delight; they build.

The word game has taken on many forms over the years, from word searches to crosswords to jumbles. But the smartphone reimagined the potential for word games, tapping into the trend of turn-based social games. Words With Friends — that venerable and addictive Scrabble ripoff — has produced millions of scrunched noses and dreamy looks, but it’s the combination of iOS games such as SpellTower, Puzzlejuice and, more recently, Letterpress, that cemented our enduring love of vocabulary.

Say What? is a fresh take on a familiar game, Hangman, but adds a dose of Mastermind. The idea is to build a word from a series of random letters for an opponent to guess in as few tries as possible. Correctly guessing letters in the wrong place earns a yellow badge; finding the right letter in the exact place assigns a blue one. Red badges come from guessing a letter that does not appear in the word at all, and are eliminated from the board. You earn points based on the number of tries it takes you to discover the right sequence, so it’s in your best interest to make your opponent squirm for as long as possible.

The game was developed by an offshoot of Toronto-based “innovation firm” bnotions. The company has a great deal of experience building apps for big clients such as Scotiabank, but Say What? emerged as a bit of a side project. Around the height of OMGPOP’s massive hit Draw Something, the team had been shooting around ideas for a turn-based social game. Already well versed in the development of Facebook games, bnotions had written a Social Application Decision Making Framework that has since been picked up by dozens of companies. In it they outline what should be taken into account when building a social app — things like a stress-free experience and a low barrier to entry. Such statements may seem obvious after the fact, but there is no magic recipe for building successful social apps.

“We took advantage of the downtime during other engineering projects and brainstormed what we would need to build a great social game,” says Alkarim Nasser, Managing Partner at bnotions and co-founder of the popular AndroidTO developer conference. “We quickly pulled together a web version and prototyped it on Android, and found that it was very sticky,” referring to the enthusiasm with which he and his colleagues would return to the game day after day.

The game is free-to-play, as most turn-based puzzle games are these days, but uses in-app currency to expand the experience. Players can use coins to “zap” superfluous letters when guessing words, or to buy letters when creating them. “There has been a great deal of retention and organic growth,” Nasser continues. “We’ve put very little money into marketing; it’s all been word of mouth.” Using Facebook’s popular social graph as a means to find and attract new players, initial versions of the app automatically posted to your Facebook wall if you guessed the word correctly on your first or second try. “We received feedback from users [regarding the auto-posting] and we’re considering turning it off by default,” he says.

There’s even something to do when waiting for your turn: you can watch opponents try to guess your words in real time, adding a bit of humour to the experience. There is an endgame, too: the first player to reach 1000 points, which typically takes between 10 and 15 rounds, wins. Users compete for bragging rights and badges on a leaderboard, and Nasser hopes that future versions will use players’ experience to better place them with random players.

“There’s an Android version coming in February, alongside a huge update for the iPhone.” He says that over 100,000 games have already been played in the three weeks since the game’s release, and since bnotions has created a dedicated gaming offshoot called Harth Labs, he expects a great deal of new content in the coming months.